Memorial for "The last gentleman of Longboat' planned for the fall

Weldon Goble Frost, 86, a retired petroleum geologist, passed away July 2, following the complications of pulmonary fibrosis. He enjoyed a wonderful life, rich with adventures, much enjoyable accomplishment, perhaps some mishaps and miscues, but filled with bountiful love.

He was born Jan. 28, 1931 in Kane, Pa., the second child of Max Weldon and Elizabeth (Goble) Frost, who both became practicing podiatrists. He looks back on his parents’ lives as not being perfect, but certainly well above average. He was raised in small-town DuBois, Pa., and graduated from high school there in 1948. At the ages of 16 and 17, he spent two life-changing summers working on the ranch of Wilbert and Bonniebelle Manning near New Castle, Colorado. The Mannings taught him the agrarian way of life, the joy of accomplishment that comes from hard work, and provided a loving home-away- from-home. He attended the Colorado School of Mines -- at that time, the world’s foremost college of mineral engineering -- on a full-tuition scholarship and graduated with honors on May 29, 1952. He went to work four days later for an affiliate of Socony-Vacuum Oil Company (later Mobil Oil Corporation) and had an excellent 37-year career there. He began working in Wichita Falls, Texas, then Venezuela (1953), Libya (1954), Penn State University (1955), Turkey (1956), French West Africa (1958), New York HQ (1958), Paris (1960), Libya (1964), Indonesia (1974), New Orleans (1977), and finally London (1981). He knew that he had enjoyed extremely good fortune throughout most of his career – “How rare it is to work in the oil business and get to live and work in New York, Paris and London!”

On a bright, sunny morning in June 1968 he married Brenda Taylor, an ever-smiling English girl -- and someone who was to remain the constant, profoundly enduring love of his life -- in the British Embassy, Tripoli, Libya. Together they produced, and she proudly raised, their lives’ most treasured endowment: two fine sons, both born in Tripoli. Survivors include that deeply loved, still-smiling- at-the- world-wife and best friend of 49 years, Brenda (“Management”); #1-son Terrence Weldon Frost (wife Rene’) of Denver who runs his own IT service business; and #2-son James Taylor Frost (wife Kate, of Kate Frost, Inc.) of New Smyrna Beach who is co-director of the outstanding Atlantic Center for the Arts; and those three highly beloved grandchildren (Max, Jolie, and Hudson). His sister, Billie, preceded him in death. His faithful beagle of over 15 years, Gunnar, also preceded him in death.

For many longtime readers of the Longboat Observer, Weldon Frost is a familiar name. He frequently opined eloquently and cogently in letters to the editor. Frost also was a devotee of well-written obituaries. When he and his wife, Brenda, traveled each year to London, Frost would return with a pile of clippings of obituaries from The Times. He shared many of them with his friends, sometimes urging us to adopt similar practices. We weren’t surprised, then, when Frost died July 2, he had already prepared his own obituary — a story of a really good man, a great American patriot and masterfully written. It is our honor to print it in its entirety. — MW

Recognizing that a society’s standard of living is directly related to the amount of energy that it uses, Frost was extremely proud to have worked as a geologist for an energy company. He lived and worked on five continents, and left, along with many others, his fingerprints on many of Mobil’s largest, and many smaller, oil and gas fields (Amal, Arun, Mobile Bay, Beryl). He was one of the first four geologists to survey in Libya after that country opened up for oil exploration in 1954. He was one of the few of his colleagues who had work experience in the fields of surface geology, subsurface geology, and seismic before becoming a supervisor and then a manager.

For a period of 18 years he was an affiliate Vice-President and Exploration Manager in those last four postings. The Exploration Departments that he managed on four continents were immensely successful in discovering commercial oil and gas deposits and developing greater geological understanding of the area being worked. His management style, gleaned over time from many others, was to efficiently organize using small teams, to delegate, and then later follow up, thus leaving him some time to Manage-By-Walking-Around. He also appreciated the simple management principle of surrounding himself with good people and listening to them. “We have two ears and one mouth, and managers should use them in that proportion.”

Adding to the success of this period, Brenda (“Management”) was uniquely successful among her peers in performing an important caring role as a Department Manager’s wife, e.g., welcoming newcomers, entertaining visitors and subordinates, teaching English to foreign wives, and providing flowers and baby gifts as the occasions arose.

Following his retirement to Longboat Key in 1989, he busied himself with a Production-Sharing Contract in Equatorial Guinea, petroleum exploration consulting in the U.S. and abroad, investing in oil and gas projects, enjoying the beach, a bit of boating and fishing, some golf and tennis, skiing, traveling -- including semi-annual trips to England and Spain – Habitat for Humanity, genealogy, the occasional random act of kindness, household maintenance, and keeping in touch with long-distant friends and family. He was known for writing many sometimes humorous, pithy or snarky letters-to-the-editor of local newspapers, or to public servants, on any current subject that he felt might benefit from his “down to Earth” point of view. Many people may remember him as a shy person, but he grew out of this as he became older.

He was a member of Longboat Key Kiwanis Club and a very successful chair of its Scholarship Committee for many years (from which he derived enormous personal satisfaction), the American Association of Petroleum Geologists for over 60 years, as well as Tau Beta Pi and Sigma Gamma Epsilon honorary fraternities. He was an active alumnus of both his high school and college, and an active member of the Emerald Harbor Homeowners Association. He founded and managed Frost Energy Company, which he called “the largest energy company on Longboat Key.”

On annual trips to Pennsylvania he enjoyed entertaining a non-functioning harem of high-school widowed classmates and widows of classmates.

On his daily morning walks, he would tip his hat to the smiling passers-by, both men as well as ladies. One lady called him “The Last Gentleman on Longboat.” Being an irredeemable dog-lover, he carried dog biscuits for the many four-legged friends whom he would meet.

Throughout most of his life, by fortuitous accident, he enjoyed a long-lasting warm and stimulating relationship with five really good long-distance friends: Rod Davenport and Dr. Ron Fair from high school; Dr. Stewart Chuber from college and Libya; and Bob Fuchs and (Best Man) Ray Flurry from the Mobil years. Neighbor Larry Harry was a walking, bicycling, and golfing companion for many years, and shared his love of Longboat Key. And he and neighbor “Cash” Register seemed to be always on the same page. Fellow Mobil employees Bruce Jones and Bill Duggan shared his retirement years.

A celebration of his life will be held in fall 2017 for family and friends at his home. Accepting the inevitable, Weldon Frost left this beautiful blue planet with only one regret -- having to leave -– but, nevertheless, he held an immense gratitude for having been given the “Gift of Life” by his parents -- and ancestors -- so ("ding-ding") that he could experience such an incredible journey and live so well and so happily in so many places and with so many friends during this most fascinating period of mankind’s history. He felt blessed to have been able to acquire during his journey some meager understanding of our marvelously complex world on which we all live ever-so briefly, within the incomprehensible vastness of an astonishingly complex universe.

He and his wife contributed to numerous charities, and during his retirement Weldon Frost “rang the bell” for the Salvation Army at Christmas for 28 years; so memorial donations may be made to his favorite charity – the Salvation Army -- who care so very well for the less-fortunate. Donations may be also be made to Tidewell Hospice whose gracious care comforted him during his last months. And a salute to the police, firemen, and military who dedicate their lives to keeping us all safe and free. 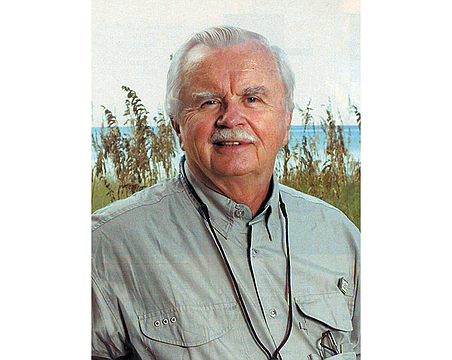 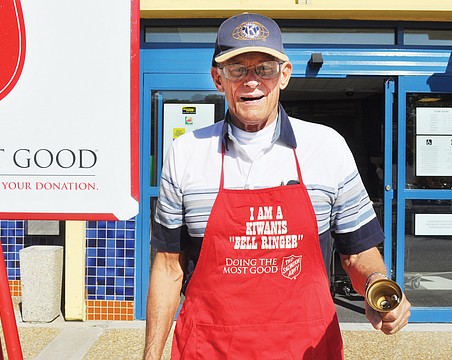 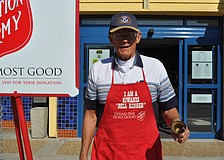 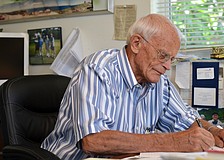 A Conversation with Weldon Frost 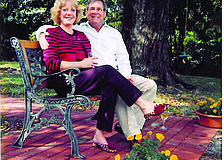 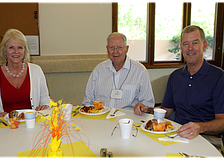