Dawna McDonough is used to hearing the obvious.

That part is true. McDonough’s vision is just fine.

“You’re not disabled,” they say.

That part isn’t true. McDonough, who began moving from Tampa to Longboat Key in the spring, does have a disability. She has an illness, one that can cause her to collapse before she realizes anything is wrong. Ninja has been trained to sense changes in McDonough before McDonough herself feels them. For example, Ninja can smell a drop in McDonough’s blood sugar on her breath and then alerts McDonough, who then takes medication attached to Ninja’s vest to prevent an attack. In the event that McDonough would collapse in public, Ninja is strong enough to physically carry her to a safe location.

McDonough was diagnosed with the illness seven years ago. For the first year, she was mostly homebound.

Then, Ninja was trained to become a service dog by Clarke Inghram, owner of Inghram’s Sit-N-Stay Dog Academy, in Tampa.

Ninja has now been a service dog for six years and has allowed McDonough to lead a normal life.
McDonough can drive, run errands and have peace of mind when she is out in public by herself.

“She is the reason I can go somewhere by myself,” McDonough said. “Ninja makes it so I can be a normal person.”

Ninja knows that she is working when McDonough puts her in her service-dog vest. McDonough can put a piece of meat in front of Ninja and tell her a firm “no.” If Ninja is wearing her vest, she won’t touch it. But when Ninja isn’t wearing her vest, she’s more likely to indulge. Although she’s still focused on McDonough, that’s when she can act more like a regular dog.

According to Inghram, Ninja was difficult to train because she had certain nervous tendencies. But he trained her by exposing her to a wide range of scents and rewarding her as she learned.

McDonough said that some people react negatively toward Ninja because of her size. When Ninja was a puppy, McDonough expected her to grow to 60 or 65 pounds instead of 95 pounds. Also, McDonough said that many people are more familiar with breeds such as Labrador retrievers and German shepherds working as service dogs than Dobermans.

Any breed of dog can be trained to do the work that Ninja does, although Ninja’s size allows her to take on a protective role, in addition to her primary duties. 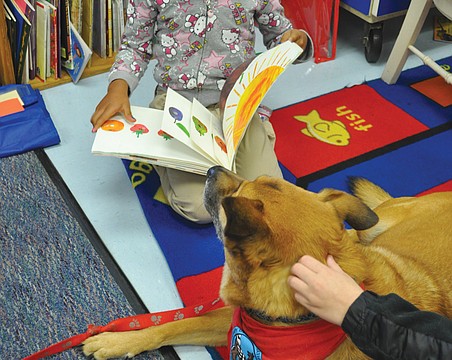 STORE AROUND THE CORNER: Alicia's Grooming 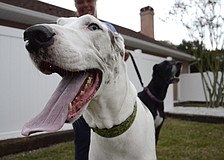 Pet rules all bark, no bite 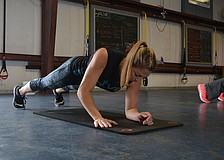 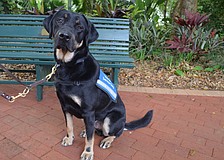 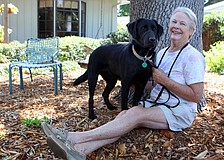