M. Night Shyamalan is back on track as a director who's capable of messing with your dreams. And not in a good way. In his new film, "Split," he creates a monster who personifies evil so effectively, it will make your skin crawl.

James McAvoy (in a performance worthy of every award) plays a man suffering from dissociative identity disorder — big time. Within his brain reside 23 personalities, and number 24 is demanding recognition after he kidnaps and imprisons three high-school girls.

One of the girls, Casey (Anya Taylor-Joy), whose past is riddled with abuse (as seen in flashbacks), recognizes she can somewhat manipulate one of the personalities, a 9-year-old boy. As she fights for their lives, the mind games escalate amidst the impending doom. His renowned DID psychiatrist (an excellent Betty Buckley) senses he's headed for a breakdown when she begins receiving late-night emails begging for help. In a Skype seminar with colleagues, she shares her belief that DID patients' minds can actually alter their anatomy. One example put forth is that of a woman who is legally blind, yet has the ability to see in another identity. Definitely spooky stuff.

Shyamalan's "Split" is terrifying, disturbing and super creepy. But he manages to convey the sinister nature of his subject matter through implication rather than graphic visuals, much like McAvoy's character does. From the opening scene to the closing credits, he maintains a firm grip on your undivided attention and never lets go. But most importantly, the casting of Mr. McAvoy in the lead was an act of pure genius.

Upon meeting this tortured soul, we know he's unlike anyone we've ever seen in the movies. Manipulating 24 distinct personalities (we don't actually meet all of them), slipping from one into the next with such ease is utterly amazing to behold. As they play with his head, he plays with ours. It's a magnificent performance, begging no comparisons, which certainly will be made. McAvoy sets an unattainable bar in this emotionally charged thriller.

Not since "The Sixth Sense" (1999) has M. Night Shyamalan done anything critically acclaimed or highly successful. In "Split" he re-establishes himself as a great filmmaker who can subtly scare you to death.

Note: If you catch the irony in the last shot, consider yourself a certified film buff. 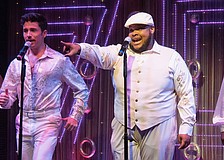