Florida’s derelict vessel definition: The Fish and Wildlife Conservation Commission defines a derelict vessel as one left, stored or abandoned in a wrecked, junked, or substantially dismantled condition upon any public waters.

Hurricane Hermine proved too much for an already frail sailboat that sank after the Sept. 1 storm in Sarasota Bay just south of the Mar-Vista Dockside Restaurant and Pub on Longboat Key.

The sailboat had previously been reported to the Longboat Key Police Department as taking on water before the storm finished the job.

The sinking is the latest chapter in Longboat Key’s ongoing struggle with identifying, removing and paying for pulling derelict vessels out of town waters.

Two-year resident Kurt Schulz, 48, said at least three derelict vessels are in various degrees of disrepair near where the sailboat sank. He said he fears even more are on the way.

“Derelict boats from Bradenton Beach are slowly on the move to this beautiful part of the Key,” Schulz said. “The authorities at Bradenton Beach have been pressuring boaters in the anchorage basin to bring their boats up to snuff, causing a lot of them to move to the village where they know they won’t be bothered.”

Property owners who abandon derelict vessels are breaking Florida law. It is unlawful for any person, firm or corporation to store, leave or abandon any derelict vessel as defined in this section in this state.

Fish and Wildlife Conservation Commission and all law enforcement officers are authorized to remove any derelict vessel from public waters that threatens to obstruct navigation or constitutes a danger to the environment.

In theory, all costs incurred in removing abandoned or derelict vessels are recoverable by law against the owners.

“You can’t get blood out of a stone, right?” Schulz said.

“The definition of a derelict vessel is so vague and you have to prove it and the paperwork is unbelievable,” he said. “I feel really bad for the police department.”

Schulz said the added police presence hasn’t kept up with the widening scope of the derelict-boat problem, which includes unacceptable behavior.

“Some of the derelict vessels are causing a hazard to navigation. The people living aboard some of these vessels are vulgar and have no problem urinating in broad daylight in front of spectators.”

The last boat removed by Longboat Key officials was the Mystical Dreamer, which moored near the Village. It was towed away from Longboat Key shores Jan. 8.

The Mystical Dreamer removal illustrates the difficulties officials have with getting rid of derelict vessels. It took the town and the Longboat Key Police Department a year to have the boat declared a derelict vessel. Required due diligence and an uncooperative owner created the delay, according to the LKPD.

The boat was towed to a salvage yard to be destroyed. As is standard practice in such cases, a lien was placed on the boat so the town can recoup $4,300 in towing costs.

Longboat Key has budgeted $10,000 for derelict vessel removal and expects a grant from the West Coast Inland Navigation District to defray any expenses.

Town Manager Dave Bullock said the cost for removing a derelict vessel varies according to size and whether it can be towed away or must be floated. Derelict boats are transported to landfills where they are stripped, taken apart and trashed, he said.

The Florida Wildlife Commission has announced it has $1.4 million to spend on cleaning up derelict vessels.

The vessel being removed from Sarasota Bay in Longboat Key, for example, could qualify for funding from the FWC Rapid Removal Derelict Vessel Grant in addition to the WCIND money. The $200,000 FWC program is designed to provide funding for qualified applicants to remove any vessel in imminent danger of sinking, breaking apart or posing a critical danger to the public safety or environment.

If a number of vessels are knocked out of commission, the $1.2 million FWC Bulk DV Removal Grant could be the best bet. Applicants must have one or more vessels ready to be removed.

The vessel removal program is funded by an allocation from the Florida Legislature.

Schulz said he’s just hoping to raise public awareness of the problem because it’s become a serious blight on the quality of life in the historic village of Longboat Key.

“It’s a family area. There are children around,” he said. “It was a safe little neighborhood where we didn’t have to lock the door. Now we do.” 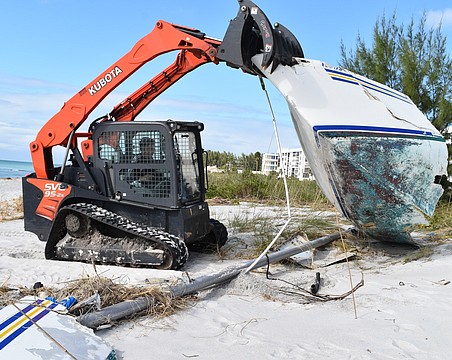 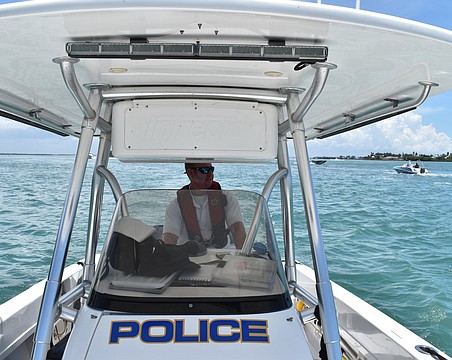 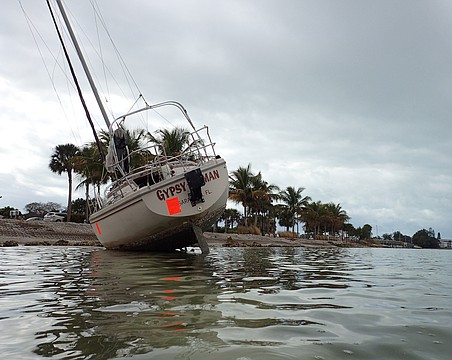 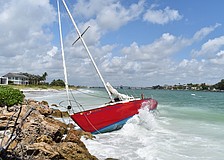 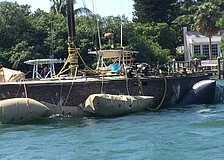 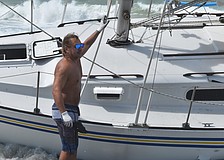 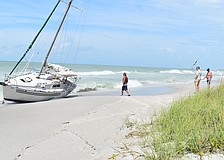 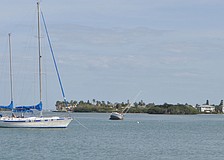