At-large Commissioner Hal Lenobel was the only incumbent who held onto his seat Tuesday, defeating challenger Phillip Younger by a slim 94-vote margin.

The most contested race this year, at least in terms of campaign contributions and expenses for both candidates, belonged to the District 3 candidates.

Brenner, celebrating his 374-vote margin at the Longboat Key Hilton Beachfront Resort, won a seat on the commission that denied him another term on the Planning and Zoning Board just last year.

Brenner has said the commission has not done enough to encourage the development of Avenue of the Flowers and revitalization Key-wide.

“I think people recognize we can do better than what we’ve been doing,” said Brenner in a speech to his supporters. “Now the burden is on me to meet these expectations.”

O’Connor declined to comment on the election results Tuesday night.

In the race of the Country Club Shores residents, Larson unseated Rothenberg in the island’s southernmost district, where the Longboat Key Club and Resort’s Islandside project is being proposed.

Larson won by 474 votes for the most decisive victory of the night.

“I would like to thank the mayor for all of his years of service,” Larson said. “I felt like I couldn’t lose because of all of the wonderful people who supported me through this process.”

Rothenberg, meanwhile, said he was disappointed in the results, but proud of his many years of service to the town.

“That’s democracy at work,” Rothenberg said. “I was happy to contribute to the town for the last five years as a commissioner, and I wish Lynn well.”

In the at-large race, Lenobel defeated Younger by 94 votes without debating the issues or collecting a dime from supporters.

“I’m a little surprised,” Lenobel said. “I expected to lose.”

When his sixth term is complete in 2012, Lenobel will have tied former Mayor Ray Metz’s record of 12 years of total service to the town as a commissioner.

Joked Lenobel, the town’s most senior commissioner at age 85: “I’m looking forward to tying the record of 12 years of service — if I can live through it.”

Younger, meanwhile, was proud of the way he ran his campaign against who he called “one of the most popular commissioners of all time.”

“I ran against a Longboat Key icon and I have no regrets,” Younger said. “I feel like I ran a clean campaign and the voters made their decision.”

For the second year in a row, no campaign issue stood out more than the Longboat Key Club and Resort’s renovation-and-expansion project.

Islandside Property Owners Coalition President Bob White urged some Key residents in an e-mail to vote for the incumbents in this election, who he believed were better suited to uphold the town’s current codes and reject the club’s current application as proposed.

Despite the fact that Rothenberg and O’Connor could not take a stance on the Islandside application that’s before the town, White believed they were better choices than their opponents, who were dubbed by some as running on a pro-development ticket.

Both Larson and Brenner were able to unseat the incumbents, despite thousands of dollars that Islandside residents contributed to both Rothenberg’s and O’Connor’s campaigns.

“I don’t think some Islandside residents are ready for change and those contributions to my opponent reflected that,” Brenner said. “But, in the end, it didn’t matter because the majority of the people around this island are fed up with a commission that doesn’t do much of anything.”

The turnout for Election Day on Longboat Key was average, however, despite the fact that the commission elected not to hold early voting on the island this year.

The town of Longboat Key reported that only 135 registered voters took advantage of early voting on the mainland this year, compared to 1,201 registered voters who voted early on the island in one week alone last year. 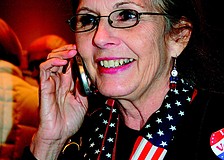