RIVER CLUB — Disagreements regarding the spending of Homeowner’s Association funds have some River Club residents questioning the community’s fight against a proposed cell tower at the neighborhood’s golf course.

The HOA board recently allocated $10,000 for the preliminary hiring or consulting of expert witnesses, if necessary, to present its case to the Manatee County Planning Commission or Board of County Commissioners in future months. In total, $39,000 of this year’s budget has been reserved for the fight, said Fulton Lewis, spokesperson for the HOA Cell Tower Committee.

But some residents argue that the use of that money should require a formal vote rather than the informal hand vote the HOA conducted at last year’s annual meeting.

The battle reignited when Vertex Development submitted an application to the county early last month to construct an unmanned, 150-foot, flagpole-type telecommunications tower. The project would be located on a 40-by-40-foot parcel at the community’s golf course, adjacent to an existing lift station. The base of the cell tower is expected to be 6 feet in diameter.

Hitting a hornet’s nest
River Club HOA leaders have been fighting the tower since January 2008, when Vertex and representatives from T-Mobile held a community meeting about the proposed tower. The meeting became so volatile that Vertex representatives ended their presentation shortly after beginning it.

Opponents are adamant that a tower would be an eyesore for residents, depreciate home values up to 15% and may even pose health hazards.

“If they are able to do this here, it will establish a precedent for elsewhere in the county,” Lewis said. “It’s not just a River Club issue.”

At River Club’s annual meeting Feb. 25, 2008, residents crowded into the cafeteria at Braden River Middle School, and HOA leaders made a presentation about the tower before homeowners showed their opposition through a hand vote.

Since then, residents have collected more than 900 signatures from River Club, Lakewood Ranch and Braden Woods residents who oppose the tower.

HOA vs. the golf club
If built, the Vertex tower would be constructed on leased property from the River Club golf course, owned by Mike Pascuzzi.

Because the rent money would belong to the course, opponents also argue it would bring no benefit to the community. In the Cell Tower Committee bulletin, committee chairman Greg Gallagher asserts that Pascuzzi did not consider River Club residents when he accepted Vertex’s proposal.

“It would be an understatement to say that there is widespread bitterness throughout River Club concerning what is perceived as an outrageous selfishness on the part of the golf club,” he said.

However, Pascuzzi maintains he is not trying to hurt the community.

“When (Vertex) first approached me, I was against it,” he said. “I thought it was ugly, and I did not want one in this community. When they showed me the alternatives, I looked at it.”

Pascuzzi said he has looked at towers in other communities such as The Meadows and the Polo Club before agreeing to consider Vertex’s proposal.

“I wouldn’t do anything that I thought was going to jeopardize my property values or the community,” he said. “The fact that they say I’m a bad neighbor ... bothers me.”

Pascuzzi also noted the course supports River Club through charity by giving away more than $30,000 in free golf balls to neighborhood children each year and sponsoring River Club’s Habitat for Humanity project, among other examples.

Additionally, the course itself improves property values for River Club residents, although they pay nothing to maintain it, he said.

Money matters
Not every homeowner is opposed to the cell phone tower. Although James Long doesn’t even own a cell phone, he doesn’t object to Vertex’s proposal. Instead, he is concerned that the HOA is using association money to fight it.

Although HOA documents grant the board the authority to include expenses for landscaping, capital improvements and “such other common expenses as the board shall deem necessary or advisable,” Long argues the HOA needs to have a formal vote before investing so much money.

But Long and at least a handful of other residents said they heard differently.

“I did not get the opinion that that vote gave them (the ability) to do whatever they wanted to do,” Long said. “Had they done that, I think some of us would have been vocal enough to stand up against it. I shouldn’t have to use my own money to fight something I’m not against.”

“The intent of the question was: ‘Who opposes the cell tower being located in River Club?’” he said. “That was about it. The minutes do not reflect that.”

Furthermore, the men argue that a hand vote is not valid because River Club bylaws specify that voting rights of members are limited to “one vote for each lot owned.”

But Cell Tower Committee members say the vote gave them a legal obligation to act on behalf of residents.

“The board consulted its attorney at a later date, and he said under the bylaws they had a right and an obligation to take action in this and go ahead and fight it,” Fulton said. “If the board failed to act, it (became a question of) whether the board could be sued for negligence. There are residents who could hold the board responsible for doing nothing (to protect the zoning regulations of the community).”

If a tower depreciates home values of every property in River Club as some suggest, a 5% decrease in property values could equate to a $20 million loss, Fulton said.

Fulton also noted that several residents are volunteering to keep expenses down.

In the June 29 bulletin, Gallagher wrote: “We will use association funds only when absolutely necessary — and even then very frugally.”

Those opposing say they know dozens of residents — mostly fellow golfers — who do not approve of the HOA’s decision to use the funds to fight the tower. Many of them have played golf other courses with cell towers and do not find them obtrusive in that setting, they said.

Lawson, in particular, hopes to raise awareness about how much the HOA is spending on fighting the tower and to get a formal vote on the issue from residents.

Other than that, there’s not much he can do to fight the HOA’s decision from a legal standpoint, he said. But if the HOA did a formal one-vote-per-lot that comes back in favor of using HOA funds, he would relent.

Moving forward
Despite rumors that the tower would not be disguised, Vertex President Alan Ruiz said the it would be made to look like a flagpole with an American flag at the top. Antennas and cables for cell phone providers would be contained inside the tower.

Although complaints against the tower have been numerous, Ruiz said the site would be most suitable to accommodate multiple providers. He added that Vertex has looked at several neighboring sites, including at a church, but none proved as beneficial as the golf course location.

“If I don’t pursue this tower, (another developer) will,” Ruiz said. “There is a strong demand for increased coverage in the River Club community. There are many customer complaints coming from that area.”

Vertex’s application to the county to amend River Club’s development plan to include the cell tower has been deemed complete, and the company now must respond to comments in the report issued by planning staff. Once those revisions are made, staff will make recommendations to the Manatee county commission, which will then take a vote.

At 10 a.m., July 3, the American flag will be raised for the first time on the community’s 125-foot flagpole cell tower, located at the golf maintenance compound at 2400 Honore Ave., Sarasota.

Members of the Alpha Company Flag Detail of the Vietnam Veterans Brotherhood will raise the flag under the command of retired U.S. Army Capt. Bobby Martin. 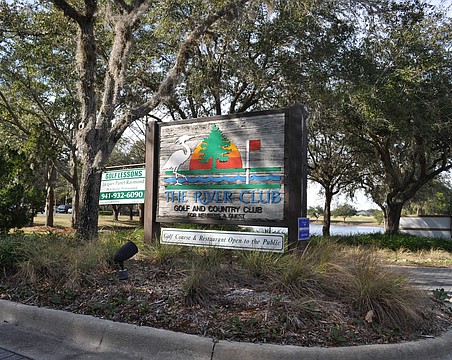 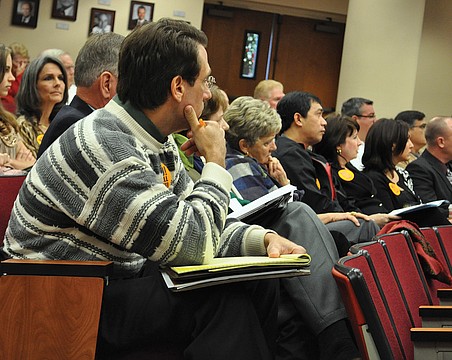 River Club residents win round one of cell tower fight