Rob Hollway will replace Jon Haskins, who coached one season

The Out-of-Door Academy announced Monday that Rob Hollway will be the school's next football coach.

Hollway, who was raised in Minneapolis, has college football experience. He played football at the University of Wyoming as a defensive lineman from 2005 to 2008, registering 11 career tackles. Hollway went into coaching after graduation, spending one year as an assistant coach at East Ridge High in Woodbury, Minnesota, before taking an assistant coaching position at Albright College (Reading, Pennsylvania). After two years there, Hollway was an assistant coach at the University of St. Thomas (St. Paul, Minnesota) from 2012 to 2014. The Tommies went 14-1 and finished No. 2 in the NCAA Division III rankings in 2014.

Hollway also has experience at private high schools. Hollway was hired as the head coach of All Saints' Academy in Winter Haven in May 2014. He would coach the school through July 2017, adding the title of athletic director in 2015. Hollway earned the 2016 Independent Football Coach of the Year award from the Florida Athletic Coaches Association after leading the Saints to their first-ever Sunshine State Athletic Conference state championship win, 25-16 over Canterbury High.

Hollway was the associate director of athletics and assistant football coach at Windermere Prep School in Windermere from July 2017 to October 2019, when he accepted the athletic director position at Southwest High in Minneapolis.

Hollway is still in the process of moving to the area but met with the team via teleconference last week.

"As the head football coach, I am committed to building a program our school, administration, and community will be proud of,” Hollway said in a release. “My focus will be on educating and developing our student-athletes physically and mentally in preparation for a meaningful contribution to their
community and future families."

Hollway replaces Jon Haskins, who went 0-5 in his lone season at ODA. 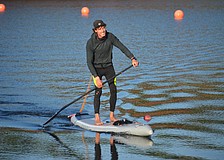