The uncompleted fire station got a beautiful boost from the Longboat Key Garden Club.

Steve Branham prepares to dig up some dirt.

Steve Branham prepares to dig up some dirt.

Members prepare to go on a tour of the firehouse.

Members prepare to go on a tour of the firehouse.

Paul Dezzi addresses the club as Susan Phillips stands by.

Paul Dezzi addresses the club as Susan Phillips stands by.

Paul Dezzi leads the club into the firehouse.

Paul Dezzi leads the club into the firehouse.

Jim Brown and Mike Haycock dig up dirt out front.

Jim Brown and Mike Haycock dig up dirt out front.

Lyn Haycock drops an ixora into its new home.

Lyn Haycock drops an ixora into its new home.

Jim Brown digs a new hole as a fire rescue vehicle heads off to a call.

Jim Brown digs a new hole as a fire rescue vehicle heads off to a call.

Carole Shawn and Nancy McLean show off their dirt-covered hands.

Carole Shawn and Nancy McLean show off their dirt-covered hands.

Steve Branham, Mike Haycock and Kathleen Wingate work together on one plant.

Steve Branham, Mike Haycock and Kathleen Wingate work together on one plant.

Linda Gidel settles a schefflera into its hole.

Linda Gidel settles a schefflera into its hole.

The planters pose with Paul Dezzi.

The planters pose with Paul Dezzi.

As Longboat Key Garden Club volunteer Jim Brown stomped on a shovel to loosen the shell-strewn dirt for a waiting ixora, a fire-rescue vehicle blared its siren and sped out of Fire Station 92. On May 22, it was business as usual for the Longboat Key Fire Department.

Elsewhere, other Garden Club members continued their business as usual, too, as they worked on the club’s latest civic beautification project at the soon-to-be-finished Fire Station 92. About a dozen members had shown up bright and early, armed with sensible shoes and grubby gloves to plant native flora around the station.

1969: Created the Bicentennial Park Butterfly Garden and planted trees, which continues to this day

1990s: Began planting trees in Joan M. Durante Park when the park was first being developed and continues adding trees to this day

2008-2016: Provided trees to finish the tree-planting endeavor along Gulf of Mexico Drive to pick up where government stimulus funds for infrastructure enhancements left off. The club continues planting trees within town parks and properties.

2016: Donated $6,175 to add shade trees to Bayfront Park during its expansion and redesign

2018: Paid for electric fans in the Durante Park pavilion

2020: Completed ornamental planting at the post office property and performed maintenance on 40 oak trees and palmettos

“Government buildings are typically austere, but not in the town of Longboat Key,” Garden Club President Susan Phillips said.

The morning kicked off with a tour of the   fire station led by Chief Paul Dezzi, who pulled open doors and explained the rooms.

There’s a treatment room for people who walk in with low-grade aches and worries such as chest pain or stingray injuries, of which Dezzi said they get about 10 a month. Off the high-ceilinged fire engine garage is a series of “red, yellow and green” rooms for firefighters to decontaminate after coming back from a fire.

Outside is the red zone, where contaminants are present. Just inside is the yellow room, where firefighters strip off their   fire clothes and dump them into an cleaner before taking two showers, and inside is the green room, where all carcinogens have been extinguished.

Once the gardeners were let loose on the waiting plants, it was a matter of about 30 minutes before the whole project was done. Members broke off into groups with a shovel each and dug into the soil before plopping the plants in and recovering the hole with shells. Phillips said the club purposefully went for drought-resistant, native plants to stand up to the island’s salty soil after talking with landscaping contractors about what would work best.

“I think with what we have here now, our job is just to maintain it,” Dezzi said.

In front are ixora with red flowers, which match well with the fire-engine red accents on the building, and a bed of cordgrass. Out back are royal palms, which were planted by contractors, and schefflera with its variegated leaves. Dezzi quickly went to water the schefflera, which had begun to wilt during its time in the small pots.

The Garden Club has a long history of community involvement and does a civic beautification project every year. Recently, they landscaped the Public Works building and did some ornamental planting at the post office.

“It’s wonderful to come back and see what we’ve done,” board member Linda Gidel said. “And residents can see we’re here and we don’t just do social events, we get involved with the community.”

The Garden Club’s next project is the north fire station, which they’ll do when renovations are complete. Also high on the radar are enhancements to the Town Center Green tree lighting site, Phillips said. 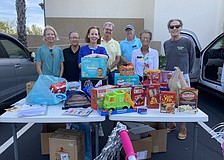 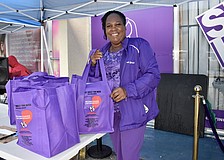 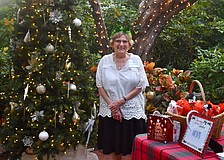 Christmas in the Garden open through New Year's Day 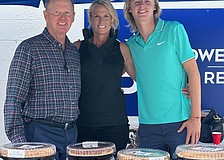 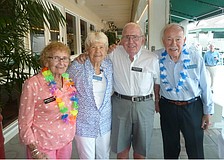