The Suncoast was full of romance during the Valentine's Day Weekend.

There’s nothing quite like Valentine’s Day, is there? It’s a holiday symbolized with romance, passion, and slightly obligatory gifts. It’s a day that both feels like a Hallmark trap and an excuse to show your significant other how much you care. So, really, it's just how much you put into it, which is true of just about anything. I was working that day, although I did take a quick trip with my SO to Seaworld later on to see the penguins. Because nothing says romance like smelly, flightless birds.

Anyway. Here’s a bit of what Sarasota was getting up to during the year’s most loving holiday.

Wendy and Jerry Feinstein did Valentine’s Day tropical style — the couple took a trip to Kauai in Hawaii. There they spent their days watching whales, going on photography trips and even made time to tango. I genuinely do not think it gets more romantic than this. Maybe if you were getting married on a moonlight beach in Spain and St. Valentine himself came down to officiate the wedding, but other than that ...

Clara Reynardus de Villanueva may have had a quiet Valentine’s (her husband Roberto Villanueva was asked to play drums in his band that day, and you can’t really turn down that call), but she put on a successful Galentine’s Day party that night. Elizabeth Waters, Hermione Gilpin, Kelly Abercrombie, Kaitlin Yelle and many more all attended the occasion, which had heart-shaped prosecco ice cubes and rum cake made by Roberto.

Some couples took it easy. Matt and Diana Buchanan had a pizza party with their kids followed by Maison Blanche for their own meal, while Shannon Rohrer-Phillips and Neil Phillips went to Orlando for their son’s soccer tournament. Phil Mancini had a hectic Valentine's — most people in the restaurant industry do — but picked up Singapore noodles on the way home and shared them with his wife, Kim, for a candelit dinner. He said it was a perfect night.

Photographer Cliff Roles enjoyed a day with the loves of his life; his wife, Maria, and his two grandchildren, Emery and Aslin Bikfalvy. When asked by his grandkids what he wanted for his birthday (which was Monday), Cliff decided he wanted to do a Valentine’s Day photo shoot with his favorite people.

Oh, and Dan Starostecki had the flu but didn't pass it on to his wife, Nicole. That's real love, right there.

Valentine’s at the Ritz

The Gamma Xi Boule Foundation celebrated the February holiday in style with its third annual Valentine at the Ritz at, as you’d expect, the Ritz-Carlton, Sarasota on Feb. 15. The fundraiser hosted around 500 people and benefits its Journey to Success program that provides scholarships to students at Booker High School and Southeast High School. The event also invited the Sigma Pi Phi international leader and grand sire archon Gregory Vincent to speak to the audience as well. Event co-Chairman Vincent Foderingham said the event raised around $100,000.

Power Couple at the Asolo

The Asolo Repertory Theatre’s opening production of “Into The Breeches!” had a romantic wrinkle as well. “Into The Breeches!” Director Laura Kepley and her husband, Playwright George Brant, both attended the event — which happened to fall on Valentine’s Day — in matching white. It was a rewarding, if occasionally stressful, debut day for Kepley, who is the artistic director of the Cleveland Playhouse.

“It’s always thrilling, you always hold your breath, and when the actors come out to take their bow, then you can relax,” she said.

Asolo Event Planner Laura Stuart Wood made use of the romantic timing and gave the night’s patron dinner a Valentine’s Day theme. 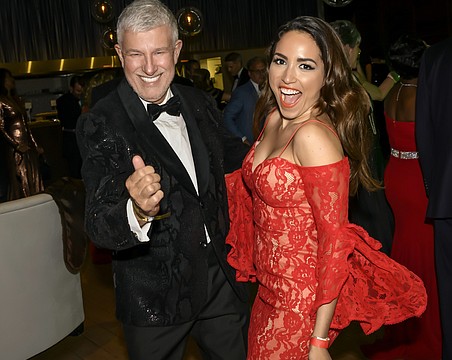 Asolo Gala moves next door for "lit" after party 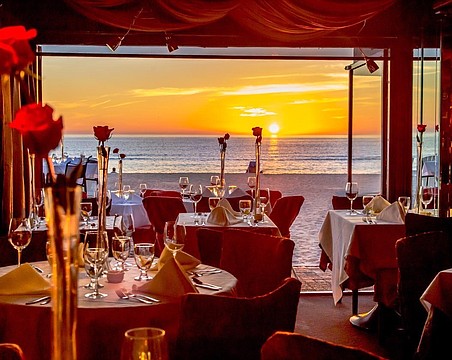 In dining, as in love, it's all a matter of taste 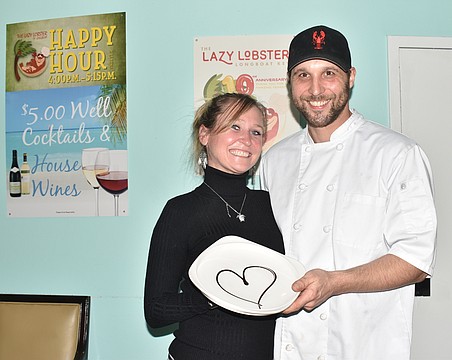 Love on Longboat: Finding the romance in a pandemic 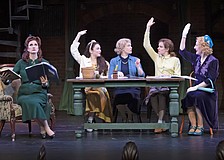 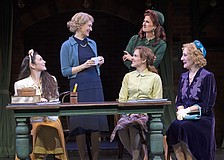 Asolo Rep steps 'Into the Breeches!' for lighthearted yet thoughtful nostalgia 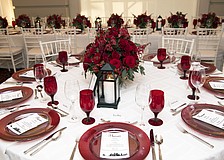 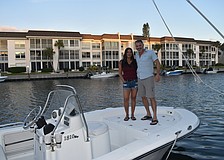 Valentine's Day dates on Longboat for every couple 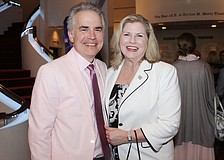