So Close, Yet So Far

SARASOTA — With the wind swirling and the raining pelting down in heavy sheets, Out-of-Door Academy senior running back AJ Strong stood in the middle of Ihrig Field at Sarasota High School in disbelief.

It wasn’t the way Strong and the rest of the Thunder football team expected their best season in school history to end. ODA had visions of playing for its first state title — a vision that was well within reach until the second half of the Class 1B state semifinals Dec. 4.

After trailing by a point in the first half, ODA gave up four second-half rushing touchdowns — a deficit that would be too much for the Thunder to overcome as ODA saw its historic playoff run come to an end with a 48-20 loss to Belle Glade Glades Day School.

“We came to play the second half, but we weren’t pulling together as a team,” Strong said. “We all started breaking down and dispersing, and as a team if you get in a fight among each other, you can’t focus, and that’s what happened and is pretty much what hurt us the whole second half.”

Glades Day responded on its ensuing possession when freshman running back Kelvin Taylor scored from 3 yards out, capping off a 10-play, 78-yard drive. After forcing ODA to go three-and-out, the Gators took the lead on Taylor’s 9-yard touchdown run.

The Thunder responded on their ensuing possession when Strong rumbled into the end zone untouched for an 11-yard score.

Strong added another touchdown on a 53-yard fumble recovery with 42.4 seconds left in the first half, cutting the Gators lead to 21-20.

But in the second half, the Gators rushing attack proved to be too much for the Thunder, as Glades Day scored 27 unanswered points on touchdown runs of 10 and 11 yards by Taylor and 16 and 23 yards by Roshard Burney.

“We were right there,” ODA coach Brett Timmons said. “We hung in there, and I think we proved a lot of naysayers wrong.”

But although the season didn’t end with ODA playing for a state title, the Thunder’s accomplishments this season were larger than anyone could have dreamed when the program began four years ago.

During that span, ODA went from a group of players with hardly any football knowledge to an experienced team vying for a state championship. Now with their season behind them, ODA can begin looking to the future and the football tradition they’ve only just begun.

“We started out as the kids who didn’t really know much,” Strong said. “We only had like three or four people that knew something about football, and look where we came. I’m heartbroken that we didn’t get to the state final like I wanted to finish my senior year, but we won because we’re starting a brotherhood.

“Now we’re starting a tradition for the other kids to come up and look at and say, ‘If they can do it then we can do it,’” he said. “That’s what they’re going to have to look forward to.” 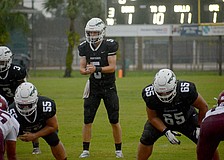