It's round 2 for Fruitville Road roundabout art proposals

The Public Art Committee narrows down to three concepts to recommend to City Commission. But will birds or clouds fly?

When the Sarasota Public Art Committee presented its recommendation for a sculpture in the roundabout at Fruitville Road and U.S. 41 in April 2022, the Sarasota City Commission sent it back to the drawing board.

The committee’s choice — a colorful coral sculpture titled “Dwell” by South Korean artist Sujin Lim — was rejected by commissioners, because, among other reasons, it bore no representation of Sarasota.

There are no coral reefs here, they said.

Commissioners further suggested the PAC bring back more than one preferred option from which they may select the winning entry. In the nine months since, the committee opened up the competition to new submissions from the prior pool of artists with instructions to consider more local relevance in their designs.

Last Friday, the PAC received preliminary concept sketches by the three finalists it previously selected, meeting virtually with each of them individually to discuss and consider options they presented. Among them is Sujin Lim, Chinese-born San Francisco resident Shan Shan Sheng and Mark Reigelman of New York.

The Fruitville Road roundabout is nestled among towering buildings including hotels and condominiums, most of them white, so height, scope and color to make the sculpture stand out was a topic of consideration among the committee members. This stage of the process was to choose a preferred concept from each of the three — Sheng provided only one — and provide feedback to guide the artists in refining their ideas before they are presented to the City Commission for consideration.

That is where the delicate balance of art meeting public perception becomes paramount.

“We’re dealing with elected officials,” Senior Planner Mary Davis Wallace, who spearheads the city’s public arts program, told PAC members last May. “We’re dealing with people who are constantly being barraged with public comment. I can tell you that it's very difficult sometimes to not listen to public feedback, and we encourage public feedback, but I also feel like there's a difference between this committee unanimously selecting something and standing behind this process and not seeing that through the lens of the people we're trying to convince.”

They’re hoping at least one of the three fully developed concepts that will eventually be presented to commissioners will be convincing.

Lim, known for her stylistic cloud sculptures, returned to her roots with “Sun Always Shines.” The PAC chose her depiction of two clouds, both perched atop angled supports that evoke rain, the largest cloud with a house perched atop. At night the supports are lit with a yellowish hue and both clouds and the house are lighted from the interior.

Sheng’s “Clouds” features multiple colorful, irregularly shaped glass panels, each supported by a single rod offering contrasting views when viewing from above and from below. The piece offers unobstructed views at street level of buildings in the backdrop and traffic navigating the circle.

Reigelman’s submissions took a less abstract view of Sarasota, paying homage to the city’s coastal, circus and seasonal characteristics. The committee selected a concept not included among his own top three submissions, titled “Snow Birds.” The concept shows two totems of two bird species, Reigelman suggesting a final concept might vary the sizes of the birds and having them point in different directions. The ironic aspect: One of the species, the dark-eyed junco, is not a migratory bird.

Roundabout and other public art is funded by a 0.5% fee on any construction project exceeding $1 million. Last fall the city and the Florida Department of Transportation reached a partnership agreement to install preselected sculptures on U.S. 41 roundabouts at 10th Street and 14th Street.

The Fruitville Road roundabout sculpture is budgeted at $250,000. 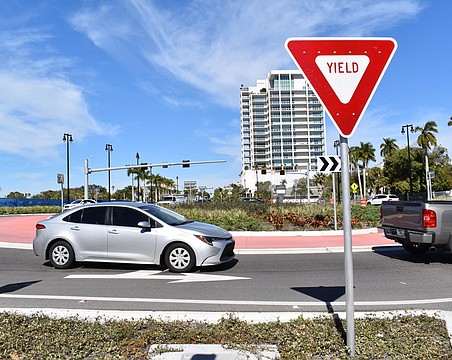 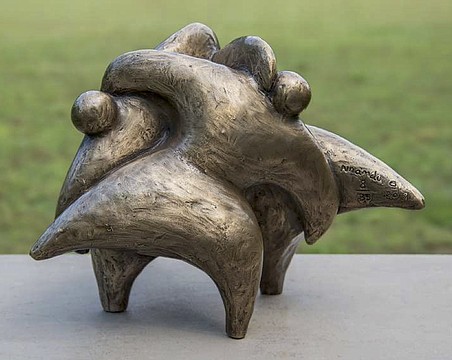 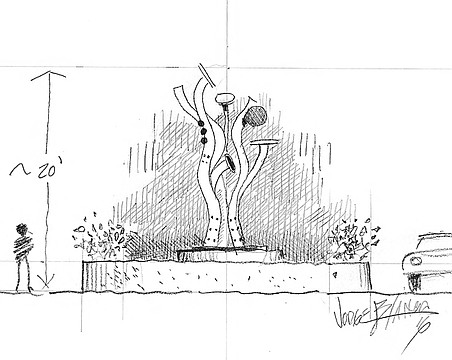 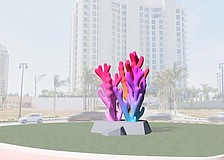 3 artists selected as finalists for US 41-Fruitville roundabout sculpture 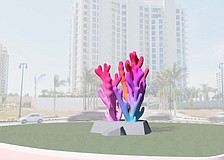 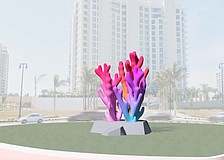 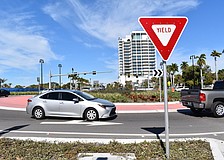 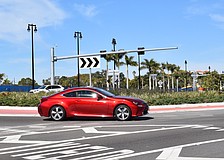