The organization, which originally specialized in domestic birds, has now extended its focus to wild birds.

Country Club resident Cindy Gordon's love of birds started with the abandoned pets she helped rescue and rehabilitate as a member of the Florida West Coast Avian Society.

However, while she knew plenty about how to care for birds, she also wanted someone who could help her, along with the Lakewood Ranch Avian Club she founded, to learn about the wild birds of Florida in addition to pets.

It turned out her efforts led her to someone who could help — Fran Meyerson of the website eBird.

In early 2022, Gordon had adopted an abandoned lovebird named Pepper from the Florida West Coast Avian Society, but the bird still was without a mate.

Her friend Karen Bennett, a volunteer at Save Our Seabirds on City Island, Sarasota, introduced her to Meyerson, who had adopted a lovebird of her own she named Peaki.

The results, for the birds, were what Gordon called “a match made in heaven.”

The two birds would snuggle together at Meyerson's home in Edgewater.

During that time, Gordon realized Meyerson could help her club grow and she asked Meyerson if she would become the club's co-chair.

“I want to do anything that supports and brings awareness to birds,” Meyerson said.

The club, whose parent organization is Lakewood Ranch Community Activities, had originally focused on volunteering and educational seminars to benefit domestic birds. Gordon said while she still hopes to offer those opportunities to members, its activities are currently focused on bird walks.

“I love it. It’s such a beautiful area, and the birds are interesting,” Sarasota’s Chris Reed said.

Meyerson said the interest in birding is growing.

“I feel like birding is becoming cool,” she said.

She noted Florida is perfect for birding.

“This is such a birdy area,” she said. “It's a really special place because of the migrants that stop here and because of the rarities that don’t really belong here.”

Meyerson said the Atlantic Flyway, a route generally considered to extend from Greenland to South America, was responsible for Florida hosting high numbers of species that do not live here year-round or are non-native, although she said birds also arrive from the Mississippi and Central flyways in the United States.

She said it was a rewarding experience to spot some of the birds that are less commonly seen, such as the American Bittern.

A medium-sized heron with a compact body, the American bittern breeds in Canada and the central United States, and winters in Florida.

Meyerson said the Virginia rail, a heavy-billed, short-tailed marsh bird that migrates south across North America, is even more of a challenge to find, as rails — which includes crakes, coots, and gallinules — tend to feed from mudflats.

Other birds such as herons and bitterns, she said, consume a broader range of prey including fish and worms.

"They're losing their habitat by us, so when you do see them now, it's a treat," she said. "It feels special."

She said birders will need to wake up early to find certain rails such as the Virginia, king, black, and yellow rails.

“The water level needs to be just right — a little bit of water, but the mudflat showing — so they can get the mollusks and their other food,” she said.

Meyerson said while she enjoys teaching others about birding for the sake of the birds and conserving their environment, another reason is the benefits she feels birding offers to people.

“It's a meditation, it's a respite,” she said. “It's something to get away from the noise and the clutter, and it's very healing.”

Meyerson said her discovery of birding happened naturally at her home in The Moorings, due to visiting the island on Lake Uihlein just beside the condominiums.

She became even more invested in the hobby after acquiring a camera and binoculars at the start of 2016, although she said she took so many pictures that the camera broke and needed to be replaced.

By 2018, she was making a “life list” of all the species she had seen in her lifetime.

Meyerson’s approach to birding is to become part of the birds’ environment, avoiding eye contact with them and using her peripheral vision to navigate the landscape. She will remain quietly in a certain location for one to two hours, waiting for the birds to adjust to her presence and begin emerging.

However, she said the experience is always about the present.

“You try to be in the moment. If it happens, it happens. If not, it will in the future,” she said.

The Avian Club’s bird walk began at the pavilion north of Palmer Boulevard, and it was not long before birds began appearing, with a roseate spoonbill passing overhead and impressing members with its pink coloration, followed by two green Nanday parakeets perching in the trees.

The walk continued with the group moving to the boardwalk area, where Meyerson pointed out a pair of grey-headed swamp hens, a bird that is considered invasive, having been introduced to North America from Asia in the late 1990s.

Finally, the group headed back across the street to watch the bird feeders, where a male painted bunting made an appearance, leaving the group awed by its bright, multicolored plumage.

Palm Aire’s Marie Sucro, a club member, said she planned to volunteer at Celery Fields every Saturday from now on.

“I can hardly breathe — I love birds,” she said.

Meyerson said she is planning further experiences the club can enjoy. She said a possible future event is a night walk where attendees could observe a sandhill crane nesting area in Sarasota.

She also said Pinecraft Park in Sarasota was an excellent location and that as a mesic hammock, a type of canopied forest, it offered birds multiple canopy levels for bird viewing, with many species that cannot be identified by the average person.

“(Fran) is really knowledgeable and we’re very happy she's on board,” Gordon said. “I just go wherever Fran goes.” 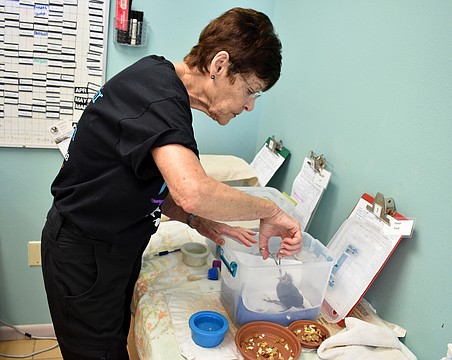 Save Our Seabirds volunteers take flight 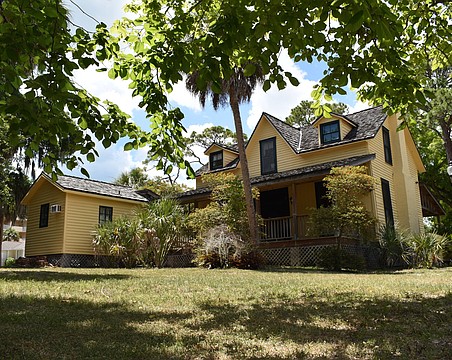 Sarasota landmarks to connect to the city's history 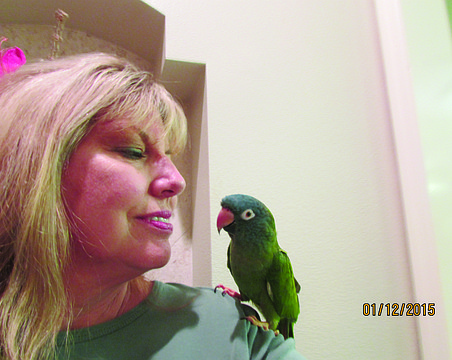 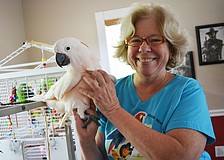 Bradenton woman's life is for the birds 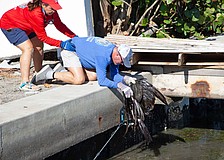 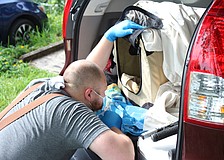 Abandoned sandhill crane colt transported to Save Our Seabirds 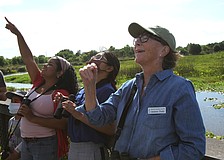 Sarasota Audubon members keep their eyes on the skies