Two struggling playwrights try a little theatrical magic to beat the Bard in “Something Rotten!” at Florida Studio Theatre. What could possibly go wrong?

"Something Rotten!" isn’t rotten at all. The musical’s ripe with comedy at Florida Studio Theatre.

Two brothers (Karey and Wayne Kirkpatrick) wrote the music and lyrics. Karey Kirkpatrick (the co-screenwriter of “A Hitchhiker’s Guide to the Galaxy”) also collaborated on the book with John O’Farrell.

They set the musical in London’s theater community in 1595. Shakespeare’s the cock of the walk, but he’s not the protagonist.

Aside from the odd plague, Elizabethan London is a happening place to be a playwright. At least if your name is “William Shakespeare.” He’s officially “the” Bard; Everybody else is … everybody else. When the Bottoms’ patron pulls the plug on their next show, they risk turning into theatrical nobodies.

They need to come up with a killer concept … overnight.

He gets glimpses of the future … but he gets it wrong. When Nick pays him to foresee the next big thing in theater, Nostradamus looks ahead and foresees three centuries too far.

He comes out of the trance with visions of “Cats,” “Phantom of the Opera,” and “A Chorus Line” dancing in his head.

The next big thing will be the musical! Nick rubs his hands and gets ready to beat the Bard with a little song and dance.

When he’s stuck for a plot, Nostradamus snags the idea for Shakespeare’s next big hit, but he gets that wrong, too. He thinks it’s going to be “Omelette,” not “Hamlet.”

Close, but no cigar.

Director/choreographer Ellie Mooney goes for realism, not broad comedy. It’s been said that the best approach to comedy is to play it straight. Whoever said that got it right.

Mooney plays the musical as the sympathetic struggle of two playwrights looking for their big break in show biz. They don’t know they’re in a comedy. As a result, the comedy works.

Her dance numbers are full throttle and deliberate silly.

Cole’s Nick is as much a producer as a playwright. He wants the show to go on and his love of theater is the reason why. (Though he loves money, too.) His wife Bea (Jillian Louis) is the sensible spouse holding the marriage together.

But her practicality doesn’t trigger codpiece busting, even when Nick steals the family funds to finance a pseudo seer.

Bea also wants to be an actor and does a male drag performance of her own when Nick needs a good lawyer.

The thought that somebody somewhere might be having fun keeps him awake at night. He’d like to send all of London’s theater folk, straight to hell. And will be damned to let his daughter marry a playwright.

David Cantor’s Shylock is a moneylender (the only job open for Jews in 1595) but he’d prefer to invest in Nick and Nigel’s company. He’s also a theater nerd.

Thank to a ridiculous fright wig, Swartz’ Nostradamus looks like he just grabbed a live wire.

(Maybe so. He shudders under some high-voltage current when prophesying.)

The Kirkpatrick’s music and lyrics are smart and hilarious.

The high-energy “Welcome to the Renaissance” kicks the show off with a bang and the songs never fizzle after that.

Conductor Conner Stigner’s brings it all to vivacious life with a real live band playing behind the scenes.

Isabel and Moriah Curley-Clay’s set is a mousetrap of doors and platforms, with a cartoonish silhouette of Olde London in the background.

As noted in a previous story, Mari Taylor Floyd and Aubrey Hess do a fitting job adapting Gregg Barnes’ costumes for the FST cast.

A lot of talent. A lot of sound and fury.

It signifies comedy. But what kind?

In their playscript, the authors describe “Something Rotten!” as a “satiric pastiche,” not a parody. It fits.

They’re not mocking Shakespeare; they’re putting him in the context of theatrical competition. Aye. But they’re mainly horsing around with the notion of an Elizabethan musical.

That, and serving up a heaping helping of R-rated giggles.

As my Shakespeare professor once said, “If you even suspect there’s a dirty joke in Shakespeare, it’s there.”

“Something Rotten!” follows in the Bard’s prurient path.

There’s also plenty of fan service for English majors — nods to Ben Johnson, Thomas Kyd, and all that.

But the musical’s up to its eyeballs in anachronism, so take it with a grain of salt.

My only complaint? No reference to the theory that Christopher Marlowe wrote all of Shakespeare’s plays.

NIGEL BOTTOM: Shakespeare is such a genius.
MARLOWE: Thank you!

It’s an old joke, but still as funny as ever. And there’s an end on’t. 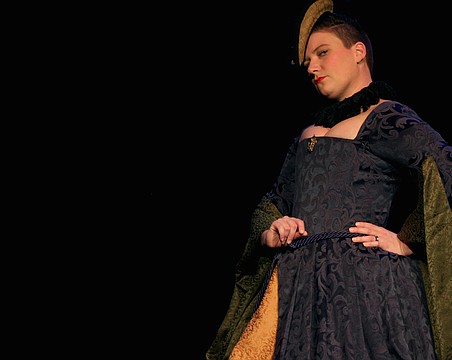 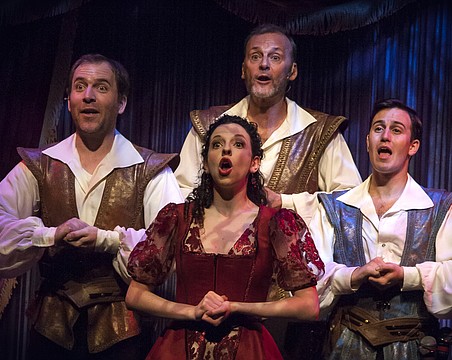 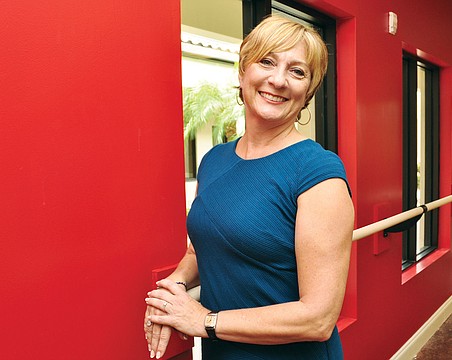 A new song and dance 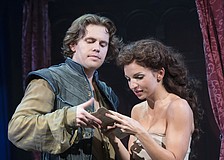 No Holds Bard: Asolo fills the blank verses of Shakespeare 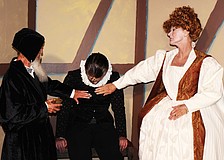 Monica Cross’ 'The Wonder of Our Stage' is imaginatively original 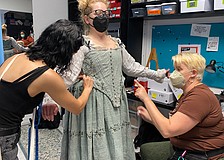 FST makes a stitch in time to show 'Something Rotten!' 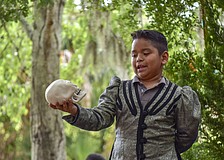 To be or not to be: Visible Men Academy students tackle Shakespeare 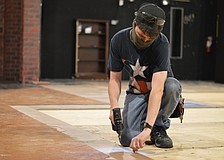