Increasing climate temperatures are leading to more hurricanes, data shows. And having a plan in place before a storm hits is key.

With storm warnings looming in the clouds and on the news, June 3 was the perfect day for the Longboat Key Chamber of Commerce to hold its annual Disaster Preparedness seminar.

The region got lucky with Tropical Storm Alex, which drenched South Florida on Saturday, but the message was clear: Hurricanes are increasing in numbers and strength.

Bob Bunting, the keynote speaker and CEO of Sarasota’s Climate Adaptation Center, said, “Our threat has really gone up quite a bit as the climate has warmed.”

There were 101 named storms recorded in the past five years. Bunting described that number as unprecedented. Not only are the numbers rising, but the categories are too. Category 4 and 5 hurricanes have doubled since 1980.

“We’re seeing these explosive development cycles that are becoming common,” Bunting said. “Only one in 100 storms in 1980 would increase 35 mph or more in wind speed in a day’s time. And now we’re having one out of 15 do that.”

Hurricane paths are also shifting as the climate warms. Paths are shifting to the right, bringing the west coast of Florida closer to the eyes of hurricanes coming up from the Caribbean.

Vendors at the seminar offered their own solutions to help businesses prepare for hurricane season.

Aqua Plumbing & Air sponsored the event, as it has since the seminars started 20 years ago. Several attendees asked about water damage products. Trainer Tom Martin had a solution on hand: the Phyn Plus. It’s a small, easy-to-install smart device that detects irregularities in water flow and allows users to shut off their water remotely and immediately.

Wrightway Emergency Services stressed the importance of having an emergency plan in place well before disaster strikes. It uses a 3D program to build personalized profiles for each client.

“If we go to your building, and you already have your plan in place, we know where your equipment is,” said Kristin Fourie.

The full-service plan includes an emergency response during the disaster and restoration afterwards, but pre-planning is a must. “We are the only restoration service on Longboat,” said Fourie. “It could be three to four weeks before we can get to you if your plan is not in place.”

But most guests were just happy to have drinks in their hands. The last two seminars were held remotely via Zoom.

ABC 7’s Bob Harrigan broadcasted his weather report live from the back of the ballroom. In addition to offering localized hurricane statistics, he calmed nerves and provided some comic relief.

“Our coast is one of the safest coasts in the state of Florida," he said, adding jokingly that it's not because Native Americans blessed this coast. “It’s because of our latitude.”

More seriously, he noted that Manatee County has never recorded a direct hit by the center of a hurricane in more than 120 years.

Then Harrigan shared an industry secret: “I think I’ve spoken to three or four national hurricane directors. They said the No. 1 question they get when they go to a hurricane conference or from people in the public is: When is my name going to be on the list?”

Predictions for the 2022 hurricane season

The Climate Adaptation Center is predicting 22 named storms in 2022. It believes at least nine, possibly 11, will reach hurricane force. And five will be major hurricanes.

Bunting explained what the CAC looks for when analyzing hurricane data.

“The most important inputs are the sea surface temperatures, whether we’re having a La Nina or an El Nino, and then there’s an oscillation called a Madden-Julian oscillation that becomes important during hurricane season.”

An analysis from two days prior showed temperatures in the Atlantic hurricane basin are 3-6 degrees warmer than normal. Bunting called the warmer water “rocket fuel for hurricanes” and said it’s one of the main reasons the CAC is predicting such an active season.

There is also the rare occurrence of having a La Nina for the third year in a row, and CDC models predict it will continue.

“When we have a La Nina, we have less wind shear in the Atlantic and Gulf of Mexico, which allows hurricanes to stack up vertically,” Bunting said. “When there’s wind shear, it blows the top of the clouds downstream, and the hurricanes can’t get organized as easily.”

Wind shear, on the other hand, mitigates the danger of a hurricane forming in the first place. It’s the one number you want to see rising in the models.

Concerns for the local community

Bunting’s biggest concern for residents of barrier islands like Longboat Key are rising sea levels. “Since 1950, you might be surprised to know that sea levels have already gone up 9 inches.” He further emphasized this point, “We’re not talking about sea level rise or in the future. We’re talking about the fact that we’ve already had 9 liters of sea level rise.”

He also showed a picture along the main escape route for Longboat, Lido and Bird keys when you reach the mainland side of the John Ringling Bridge. The sky was blue without a foreboding cloud in sight, and the water was only inches away from overflowing onto the nearby sidewalk and roadway.

Bunting is calling for infrastructural changes and has already brought the issue to state and local officials. Population plays a part because there’s less of a margin now. Longboat Key and other keys need to replenish their beaches more often.

He suggested the crowd start asking questions of their local government, such as, how is your area going to adapt to these serious changes in hurricane behavior given climate warming? When will communities begin to raise their critical infrastructure like roadways, and should we wait until we have a big disaster before we do it?

Until major changes are made, residents need to know their evacuation route and have a plan in place to evacuate early. 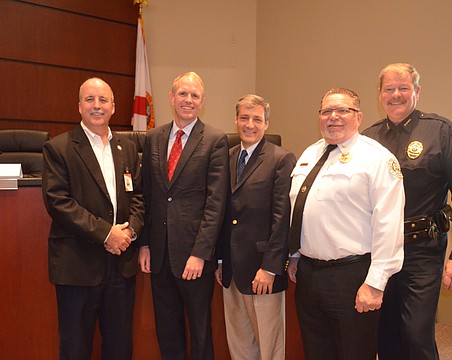 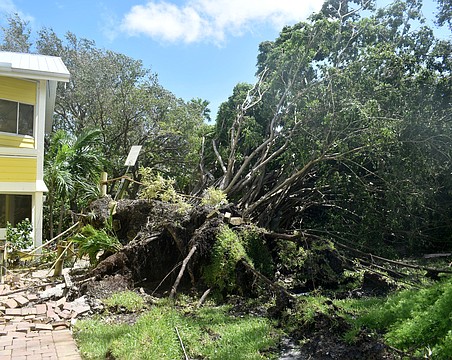 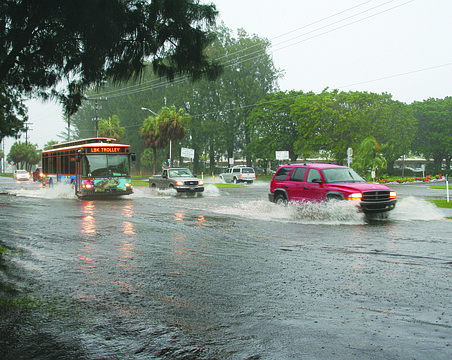 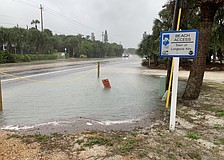 Longboat Key, county leaders on hurricane preps: 'Have a plan'

Ida likely will cause beach erosion 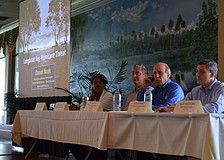 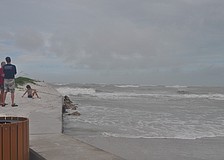 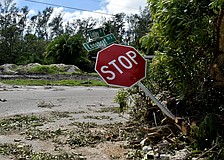