Longboat Key Foundation Chair Jim Brown had a simple request of Longboat Key leaders about the future of the Town Center Green.

“I would like you to approve the town manager moving forward with an architect to come up with a concept plan, not a design, a concept plan,” the former mayor said, adding he’s been working on proposals for the green space and what might someday be built there for 20 years.

Ultimately, Town Commissioners agreed by consensus to ask Town Manager Tom Harmer to move ahead with the broad concept plan.

Brown also asked a group called Theatre on the Green, which announced in December it was raising money for the construction of a black box theater performance space on the land to hold off until such a concept plan is created.

“I love the idea of a concept plan,” said Tom Aposporos, the former Longboat Key Chamber of Commerce President who spoke on behalf of the group proposing and raising money for a black box theater.

The rejuvenated talk of construction on the Town Center Green comes about a month after Theatre on the Green's $750,000 fundraising campaign was announced. Some town leaders said they were surprised by the December announcement.

Longboat Key Mayor Ken Schneier asked Aposporos how the Theatre on the Green group planned to build a black box theater after Ringling College of Art and Design was trying to raise $11.32 million for an Arts, Culture and Education building three years ago. The town’s partnership with Ringling College has since fallen through, but Schneier said one of the phases of the project would have cost $6,755,000.

Aposporos said he anticipates the cost to increase for a proposed structure or structures.

“I can tell you that the person who has provided information to us and who has built a black box theater called me years ago, and wondered why that was so expensive,” Aposporos said.

Aposporos declined to say who specifically he spoke with or provide information on the similar Sarasota County area facility that got built. He also said envisions the Theatre on the Green group as a “positive contributor” to what town leaders want to build.

“We’re at the beginning of a process in which we’re coming to you to say, there are individuals in our community who have put money forward in order to encourage the construction of a black box theater,” Aposporos said. “They are not trying to compete with anything.”

The Longboat Key Foundation is already helping the town raise money to fund the project.

“I would ask the black box group if they would just back off a little bit and wait, and let’s see where this is going,” Brown said.

“I am thrilled if people want to contribute to our future projects on phase three, but phase three and how that project comes about will be decided by the Town Commission and the leadership of the town with (the) assistance of our experts with (Tom) Harmer and Isaac (Brownman’s) staff and others to assure that we have an integrated property that works for everyone,” Bishop said.

The town has more than $1 million set aside for phase-two construction of the Town Center project, which includes developing an outdoor venue and stage. Town Manager Tom Harmer estimated the town would reach out to contractors in March and stage construction could begin in spring 2022.

“One of the things that we’ll need is the construction documents for the stage, and so the architect is working on finalizing those,” Harmer said.

The design completion of the outdoor stage is expected to get done in March. Longboat Key residents Paul and Sarah Karon are providing funding of up to $500,000 in exchange for the naming rights to the outdoor stage, which will be called the Karon Family Pavilion.

Harmer said the plan is to add bathrooms to the stage and expand the stage’s storage area. The site also plans to have bathrooms in the southeast corner of the site.

In plans put forward by the town, space was left for two building sites at the Town Center with no specific used identified. One is about 11,200 square feet, the other around 7,700 square feet.

Public documents explain what the town hopes to accomplish with the concept for phase three  of the project:

“It will help serve as a hub of resident connectivity through lifelong learning, community engagement, and cultural activity. The Center is intended to have programming and amenities targeted to residents and visitors on the island while enabling a limited attraction to guests from the mainland. The intent is to co-locate multiple uses, activities, and offerings in a flexible space.”

Town staff have had conversations with Sarasota County Libraries, Sarasota County School Board staff and the Education Center at Temple Beth Israel about the Town Center site. The town seeks to advance a county-funded public library; classrooms and meeting space to support an educational component and a large multi-purpose space.

Longboat Key is Sarasota County’s only municipality without a public library.

“We’re focusing on how do you develop that multi-purpose community facility that might have a library piece, an educational piece and some level of larger, multi-purpose space that can be used for various things,” Harmer said. “So how does that then play out on the site?”

Click here to view the Longboat Observer's interactive timeline of coverage on the Town Center site. Readers can also scroll below to read through the timeline of the Observer's coverage.

March 2014: The Town Commission unanimously approved the purchase of a 2.8-acre parcel of land behind the Longboat Key Publix and SunTrust bank for $1,508,000.

The property was owned by Longboat Key resident Joe Wolfer. It is the site of the former MODA on Longboat Key luxury condominium project that was nixed in August 2008.

December 2014: The town held its first public workshop for the Town Center concept.

January/February 2016: The town of Longboat Key and Ringling College of Art and Design announced the signing of a memorandum of understanding “on a partnership for the purposes of achieving various aims and objectives relating to the establishment and maintenance of a Longboat Key Art and Cultural Center.”

Former Town Manager Dave Bullock said the purpose of the memo was to provide the framework for a future contract between the town and Ringling for the proposed cultural center.

Later in the month, the Town Commission voted to buy the 2-acre Amore property for the proposed center. Former Vice Mayor Phill Younger cast the deciding vote for the town to buy the property from investor Howard Rooks for $2.2 million.

August 2017: The Longboat Key Foundation began spearheading efforts to raise money to construct a 40,000-square-foot facility, which was expected to include a 299-seat black box theater and art classes, galleries and events.

At the time, Ringling College would be responsible for managing programming at the proposed center, and the town would own the property. The foundation’s primary responsibility in making the $17 million to $18 million facility a reality was raising the money. The town had already contributed $5 million to the project, and Ringling College representatives had said the school would also make a contribution, though an exact amount had not yet been determined.

April 2018: The Sarasota County Commission approved a $400,000 request from Longboat Key to fund demolition and site design in preparation for the proposed Arts, Cultural and Education Center.

The town used the money to demolish the former Amore restaurant building and prepare the site.

March 2019: The Longboat Key Town Commission agreed to drop the idea of a black box theater for its proposed Arts, Culture and Education Center and replace it with a multipurpose room that could be used as a performance space.

That decision came after its partner, Ringling College of Art and Design, indicated it was not qualified to run that kind of performance venue and raised doubts about raising about $18 million to build the facility as originally planned.

The price for the project changed to $11.3 million.

April 2019: Longboat Key Town Commission rejected a memorandum of understanding with Ringling College over the proposed Arts, Culture and Education Center, and aimed to keep working on the wording.

Ringling College told Longboat Key leaders the college would reconsider a venture with the town to develop the proposed Arts, Culture and Education Center.

Ringling President Larry Thompson cited “negative feedback” and its likely effect on fundraising for the privately-financed project. The college had been working with the Longboat Key Foundation on raising $11.3 million for the project.

October 2019: Plans moved forward on creating a basic village-green site at the Town Center, which is useful for a range of low-impact outdoor activities.

Town leaders asked the public what they’d like to see at the Town Center site, especially considering the aging recreation center in Bayfront Park.

March 2020: Longboat Key staff and Hoyt Architects held a forum at Temple Beth Israel to get public feedback on possibilities for an open-space site and Town Center.

Town leaders discussed what specifically to build and how to fund the projects.

Possibilities for the site, included a community center, a new recreation center, an outdoor space for arts and live entertainment, a library, pickleball courts and a cafe among other things.

August 2020: Phase one work of the Town Center Green plan got completed.

The improvements to the site between the Public Tennis Center and the Shoppes of Bay Isles include clearing the property of vegetation, raising the site out of a floodplain, adding some shell pathways, adding sidewalks, resurfacing the former Amore restaurant parking lot and sodding a new grass field.

The Longboat Key Historical Society moved its historic cottage on the morning of Jan. 13, 2021, from 521 Broadway Street to the northeast part of the Town Center site.

February 2021: After Town Commissioners expressed a desire to rekindle the relationship with Ringling College, the school’s President Larry Thompson cited several reasons why it’s “not probable” for a partnership to resume.

Later in the month, former Longboat Key Commissioner George Spoll suggested the change for the proposed Town Center structure to operate at “minimal cost to the town.”

July 2021: The Town Commission approved $50,000 for planning to complete design and construction plans for an outdoor stage at the Town Center site.

October 2021: Completing the outdoor Town Center venue along with phase two improvements and building a stage are among the town’s 2022 strategic plan initiatives. Phase two work includes walkways, lighting, bathrooms and land preparations for the planned addition of a performance stage.

November 2021: Town Manager Tom Harmer announced Longboat Key residents Paul and Sarah Karon would donate up to $500,000 to fund and design the construction of the Town Center stage in exchange for its naming rights.

December 2021: Town Commissioners unanimously approved calling the to-be-built outdoor stage of the Town Center Green the Karon Family Pavilion. In exchange, Sarah and Paul Karon agreed to donate up to $500,000 to the town.

January 2022: The Theatre on the Green proposal calls to raise $750,000 in private donations to build a black box theater. A late December 2021 news release stated that former Longboat Key Chamber of Commerce President Tom Aposporos and former Commissioners Ed Zunz and George Spoll are close to halfway to their fundraising goal.

Dates provided by the town of Longboat Key. 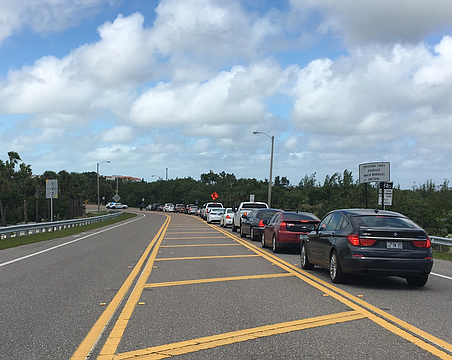 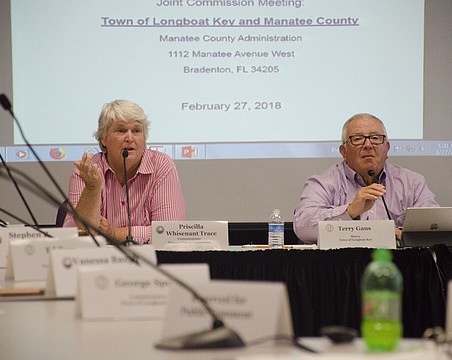 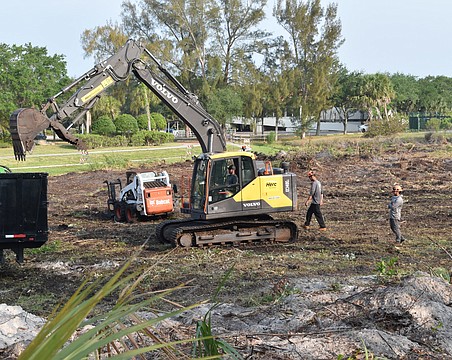 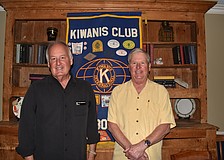 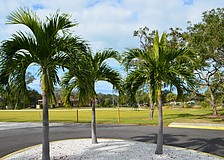 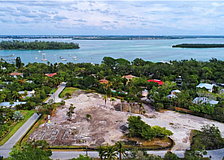 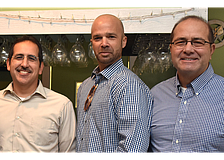 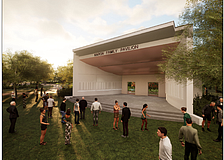