TWIS Asks: Mike and Justin Pachota of Fin's at Sharky's

Nearly 15 years after the original idea to add an expansion to Sharky's on the Pier, owner Mike Pachota and his son, Justin Pachota, finally opened the doors last Friday to their new restaurant, called Fin's at Sharky's. The chic, contemporary restaurant is on the second floor of a new building next to Sharky's, and boasts a bird's-eye view of the gulf. But, the owners say the new digs are about more than a pretty view.

When did you decide you wanted to open Fin’s?

Mike: It was probably 15 years ago. The restaurant is on city owned land, and when we decided we wanted to expand, we had to go through a few years of legal stuff. But, we were finally able to start construction in December of 2011. It was a two-phase project. The second phase began in October of 2012.

Why did you want to open an additional restaurant?

Mike: It originally started, because the old restaurant sits on the ground, and if there were a natural disaster, we would have to rebuild on stilts, so we wanted a second building we could have open. The whole idea was to protect us from disasters.

What was your vision for Fin’s?

Mike: We wanted to capture the view in a clean, modern beachfront restaurant.

How would you describe it?

Justin: It’s fine dining in a casual atmosphere, and it’s family oriented. We didn’t want to lose that aspect. We have a kid’s menu that’s like foodies in training. We have a more progressive menu, and our kitchen can handle changing trends better than the Sharky’s kitchen — that’s built for speed.

If you could only eat one meal prepared in your new kitchen, what would it be?

Mike: Definitely a steak. We bought a special grill and oven for the kitchen that can cool at 800 degrees. We use mesquite charcoal and smoke our rib eyes in the morning. Our New York strip is one of the best I’ve ever had. And, our filet is 100% Florida beef. We try to stay as local as possible.

Justin: Our pork chops are the best. It’s like a giant piece of bacon. We also serve sushi now, and that’s something we didn’t have before.

This project was years in the making. How does it feel to finally have the new restaurant?

Mike: We’re pretty excited. We wanted to create something that we didn’t think Venice really had. We opened on Friday the 13th, but with all it took to get us here, that was the last thing that was going to scare us.

Justin: It feels good to finally get back to actual restaurant work, because that’s what I’m best at. It’s interesting, because Fin’s was never really the plan. It was going to just be an expansion of Sharky’s, but so many things happened in those years. It was kind of born from a series of events.

Sharky's has been in business for 27 years. What’s the secret to your success and longevity?

Justin: I think it’s because we’re so focused on families. I love when a 40-year-old comes in and tells us he used to come here on family vacations when he was 10. It’s so cool. It’s hard to imagine how many people have met here over the years. We know plenty. It makes me feel good to be part of Venice’s history and its future.

Mike: We also try not to rest on the laurels of our location. Inside the restaurant, we pretend we’re on 41, competing with every other restaurant. We’ve tried hard to make it the type of place we’d like to go to on vacation. When you take something you enjoy personally and turn it into a business, it’s a lot easier. 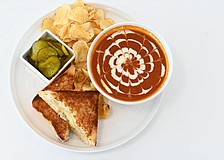 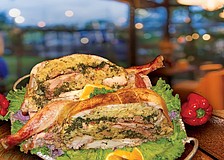