She Sez: The Night Someone Decided to Man Up

A few weeks ago I wrote a column about my complete frustration with the dating scene in Sarasota. I’m newer to Sarasota, four months out of the gate, single for the first time in 10 years. I’ve noticed a peculiar dynamic afoot that I can’t quite put my finger on. It’s as if the men in this town have lost their ability to hunt. Are we women making it too easy for them? Since the breakup, my girlfriends have attempted three set-ups, all of whom had supposedly expressed interest in me. I agreed to each one, but none resulted in an actual date. Instead of “let me take you out to dinner sometime,” I ended up with random texts, flirty Facebook messages and one gentleman who seems to materialize from the ether wherever I “check in.” In my book, if a guy can’t pick up the phone, he’s either uninterested or not worth the effort. I wrote my little heart out and asked for someone, anyone, to man up and make some sort of effort on Valentine’s Day.

Little did I know I was about to get my wish.

My mom and I decided to have a girls’ night out and check out the Burns Court Walk. Neither of us were properly made up---we Southern women are usually done up to the nines before EVER daring to leave the house---but I promised her it was quite doubtful either of us would be picking up men in an antique store on a Friday night. We were both in the middle of a “why don’t we do this more often” moment when we stumbled upon a pre-Valentine’s Day celebration at L. Boutique.

Stickers ... oh god, no. My mom forced me to don a red, glittering heart, which signaled that I was “available.”

I was immediately drawn to the cashmere wraps when I spotted a crush of mine on the other side of the room. I had heard from a friend who heard it from a friend that he liked me, but he never asked me out on a date. Damn! It’s amazing how a lack of mascara and lipstick can act as beacons for attractive men. Focus on the cashmere wraps! Pick one up. Look cool. Look casual. Smile. He obviously doesn’t like you anyway because he never called. Move on. The distraction worked, as cashmere tends to do. So soft, such pretty colors. Perfect for a cool Sarasota evening or a cold restaurant. I had just discovered one in the perfect shade of aqua blue when I noticed my mom from across the room. She had the rapt attention of two rather good-looking gentlemen who appeared to be my age, and they seemed to be flirting with her. What can I say? The woman’s got game.

I beelined, I mean, gracefully sauntered over to rein her in. Naturally, they were busy discussing what sorority and fraternity they belonged to in college, when a third ridiculously handsome gentleman joined us. I immediately morphed into anxiety girl, as I tend to do when I encounter an attractive man. I switched back and forth between armchair quarterback in the back of my mind and cold calculator of male potential. Tall, check. “Wow, that sounded stupid. Why can’t you flirt like a normal pretty girl?” Kind eyes that turn slightly down on the sides, cute. “My mom is bragging about my childhood accomplishments. I play the piano. I graduated from Auburn but I started at Vanderbilt. Dear Jesus make it stop. Why is my hair in a ponytail?”

His smile made it difficult to maintain eye contact. Dimples. Every time. “Why did I just tell that story? Why? It’s pointless and doesn’t remotely relate to his previous point. Stop sounding awkward. Can’t I think of anything witty to say?” Wait. Rewind. Did he just say he’s a writer? Code red. This has disaster written all over it. Tall, dark and handsome is one thing, but an artful command of the English language is just hot. I was smitten. You may ask, how smitten was I? At one point my crush came over and joined our conversation. I was completely immune to his charm. What happened next came as a complete shock to the system.

“Can I ask your daughter for her phone number?”

What’s this? Surely he meant, “Can I send your daughter a cryptic text with a winky face four days from now?” I was swooning, weak in the knees, but I quickly regained my equilibrium. At that very moment my inner vixen took over. Yes, I have one, believe it or not. I have moments in which I ditch my insecurities long enough to acknowledge that I’m good-looking, I'm smart, and I make a really witty remark approximately one out of every 10 attempts. He proved his worth by taking a risk. I was intrigued, and now it was suddenly my turn to act. I changed from geek to seductress faster than Optimus Prime can transform into a truck. “Bat those eyes. Smile. Touch your hair. Move one step closer to him and look deeply into his eyes.”

Yes, cute boy. Asking my mother for my phone number was very crafty. I hadn’t yet seen that move in the wild, I must admit. I certainly admire the nerve that must have taken, but I’m not going to make this easy for you. I sensed that he had other plans later, and I decided to test his interest level.

“How about you cancel your plans and take me to dinner?” I said.

He passed the test. Manned up, so to speak.

Next thing you know we’re sitting at Darwin’s discussing the literary merits of Tom Wolfe and wondering how we got there. We ran in the rain, barhopped a bit, and I broke a heel dancing to Frank Sinatra. It was one for the record books, and I’m suddenly a big fan of Valentine’s Day. I can’t believe this is going to press. This Blonde has some nerve … 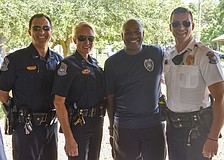 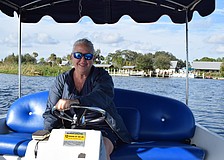 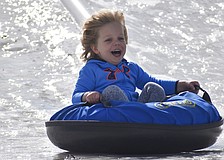 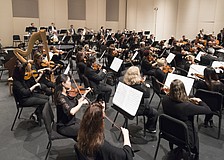 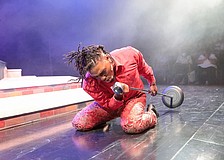 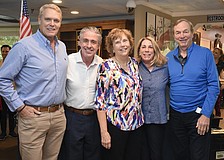