The Longboat Key Club's donation to the town allowed for new AEDs to be purchased for police patrol vehicles.

The presence of an automated external defibrillator in the event of cardiac arrest can mean the difference between life and death. The Longboat Key Police Department is awaiting the arrival of new ones after a Longboat Key Club donation to the town was set aside for their purchase.

“Having one in the trunk of every car will enhance the safety of visitors and residents of Longboat Key,” Police Chief George Turner said.

The fire department already has state-of-the-art AEDs in place in their trucks and vehicles, but with the police receiving new ones, operating the technology will be easier than ever when the pair are responding to a scene.

“It’s especially important because the police out here are dispatched to every EMS call,” Fire Chief Paul Dezzi said.

Previously, if a police officer arrived at the scene of a cardiac arrest  and began using the previous AEDs, fire department paramedics would have to switch to their more advanced gear, often costing valuable treatment time.

Once the new systems arrive to the police, both departments' technology will be able to work together, allowing the same patches to stay on the patient as the fire department hooks in their equipment.

The police department has had AEDs in their patrol cars for years, but as those years have passed, they have approached the end of their useful lives.

Turner and the department had already begun looking into options for replacement AEDs when they were notified of the donation to the town by the Longboat Key Club equaling about $14,250.

Town Manager Tom Harmer had discussed with Key Club representatives the desired end use of the funds and agreed purchasing the life-saving equipment would be a good use.

The donation will provide eight Stryker AEDs in all of the department’s patrol vehicles, but the town will have to use its own funding to replace the one inside the department’s headquarters.

Turner says he expects to receive the shipment any day now.

Following the incident where Buffalo Bills safety Damar Hamlin went into cardiac arrest at the start of the football game against the Cincinnati Bengals Jan. 2, Dezzi recalled the following day he was receiving calls from condominium  associations looking for a way to train their residents to be able to respond to cardiac arrest, if one were to happen in their building.

Longboat Key is also one of a number of local departments that use the phone application PulsePoint. The app is 911-connected and allows users to view and receive alerts on calls being responded to by fire departments and emergency medical services.

But beyond a simple conveyance of 911-dispatch information, the app has a more-valuable and potentially life-saving use.

Uses of the app can find the nearest publicly available AED machine -- many of which are now available in stores and other public sites. The app can also alert trained-in-CPR subscribers of a nearby emergency, so they can step in to immediately help.

Due to the average age of residents on Longboat Key, knowledge of both how to use an AED, where one is available, and how to do CPR is crucial.

Dezzi urges any citizen who is experiencing the early warning signs of a heart attack, such as chest pain, pain down the left arm and shortness of breath to call 911. The earlier the issue is caught, the better.

After two years away, the fire department’s annual hands-only CPR training and use of an AED has returned to the town.

“At first people are hesitant to sign up, but once they learn there is no mouth-to-mouth portion, they kind of ease up,” Dezzi said.

Similarly, individuals are often afraid to use an AED, but once they go through the training they learn it’s as easy as placing the patches and listening and following the automated prompts from the machine, he said.

“If the machine does not identify a need for a shock to be administered, it’s not going to give the prompt to administer the shock,” department outreach officer Tina Adams said.

Free 45-minute CPR trainings are available at 10 a.m. or 2 p.m. on various weekdays through February and March at the Fire Rescue Station 91, 5490 Gulf of Mexico Drive. Call the administrative personnel at 941-316-1944 or visit Facebook.com/TownOfLBK for more information.

Class sizes are limited to 18 people with the majority of the dates in February already filled up. Due to high demand, 12 additional dates were added in March with all having available spots as of Jan. 23.

“Usually, the later classes fill up once people have attended and tell their friends and neighbors about it,” he said.

Dezzi said it is not uncommon for residents to come back after their first training as a way to receive a refresher course, which the department encourages.

This year, instead of outsourcing training, the department has opted to use on-duty in-house firefighter/paramedics to teach residents. This also allows for the department to host more training dates than if they were to contract out another agency to do it.

Chest compressions are essential knowledge for everyone to have as it can make a large difference on whether or not an individual survives. Often, instructors rely on a cadence similar to the rhythm of the Bee Gees' classic "Stayin' Alive'' song made famous in the 1977 movie "Saturday Night Fever.''

For each minute chest compressions are not being done, the likelihood of that person surviving decreases by about 10%, Dezzi said.

Of course, it is essential that emergency personnel are notified of the issue first, but compressions should begin as soon as possible afterward.

The town currently has 19 AEDs within the government buildings. Twelve of those are housed and belong to the fire department. Each town facility has its own. The number does not represent the eight AEDs the police department is set to receive. 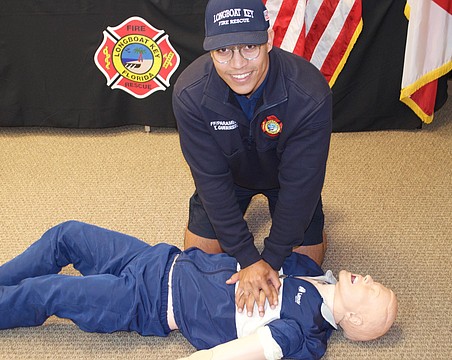 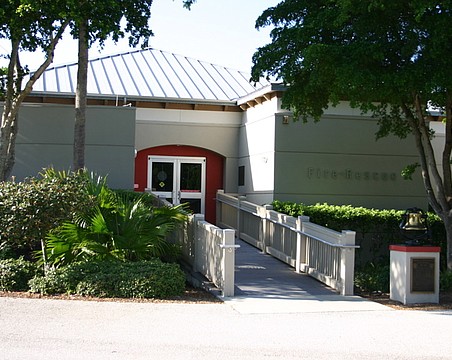 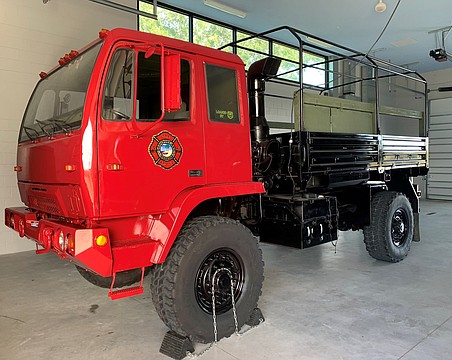 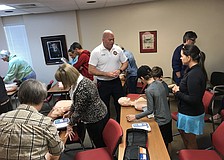 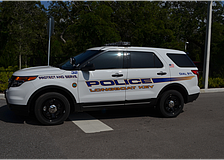 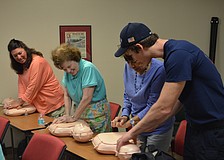 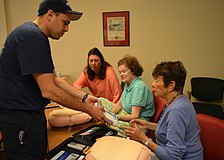 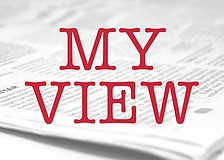