Alexander Solotzew believes his work is the art of the future. And it demands to be seen in the present.

Alexander Solotzew doesn’t believe in the trope of the tortured artist.

And if you do believe in that concept, he thinks you might be hanging the wrong things on your wall.

Solotzew has been toiling on his craft for more than half a century now, and his latest exhibit at the Art Ovation Hotel reflects the last nine years of his work.

That exhibit, dubbed "Life in Colors," will have an official opening on April 7, and it will be displayed at Art Ovation into August.

The paintings, filled with vibrant colors and vigorous action, all fill one theme, and that’s Solotzew’s love for life and the human condition. This artist never works when he’s unhappy because he believes his subconscious would render his work unrecognizable.

“The painting reflects the soul of the artist,” says Solotzew, translated by his wife and artistic manager Marina Solotzew. “I tell all my clients you have to know the artist. “If you don’t know who the artist is as a human being, you may wind up with a painting that will be influencing your life in a negative way. I’ve experimented; I never paint when I’m in a negative mood or loaded with problems. No matter how perfect the painting is technically — the composition, the form, the color — it will still reflect my state of mind at the time.”

Solotzew fully conceives the paintings in his head before he works on them. And he doesn’t sketch them out. Sometimes, in fact, he has so many competing ideas in his head that he cannot work on them all; and sometimes, in those cases, his inspiration is lost forever.

His talent was recognized from an early age, but it’s taken a lifetime to develop his skill.

Solotzew, born in Kalingrad, Russia, began painting at age 11, and he received a rigorous artistic education at the Moscow Academic Art Lyceum; Solotzew later studied at Tambov Art College and the St. Petersburg State Academy of Painting, Sculpture and Architecture. That just describes where he was taught; it doesn’t describe how he was taught.

Marina Solotzew said Alexander was separated from his parents for four years starting at age 11, and he painted eight hours a day learning every line of masters like Botticelli and Michelangelo. That was only the beginning of his life education.

Solotzew moved to East Germany in 1981, and after the Berlin Wall fell, he crossed the barrier like so many other thankful citizens of the world. Solotzew considers himself a cosmopolitan; he wants more than anything to connect people and to help them appreciate beauty in their day-to-day lives. And since moving to Sarasota, he's entered a productive phase of his career.

“He believes it’s very important for an artist to know what’s happening in the world. He cannot separate himself from it,” says Marina Solotzew about her husband’s frame of mind. "If he did, he wouldn’t be a contemporary artist. He wouldn’t be reflecting what’s happening at this time. But also, he has to reflect what he feels and how he feels.

That love is readily apparent in many of his pieces, whether it’s a pair of couples dancing the tango or a celebration of a Jewish wedding inspired by artist Marc Chagall. Solotzew portrays New York and Paris in his paintings, and another one evokes Venetian canals.

One piece in his latest exhibit, in fact, is inspired by Sarasota’s Field Club, and it features a reclining couple dressed in tennis whites and looking out over a beautiful water view.

“We went to this club with our friends,” says Marina about the genesis of the painting. “When Alexander came out, he saw people playing tennis, boating and all the beauty that Florida can offer. And he immediately said, ‘I have to start painting about Florida.’”

The Field Club painting — and indeed much of his Art Ovation exhibit — is influenced by his marriage to Marina Solotzew about nine years ago.

Solotzew believes his inspirations come from God, but he said that getting married again helped fire his creative engines.

“Being married brought me a lot of joy,” he says. “I’m in love, and my work always reflects my passion. There’s a lot of joy, and that’s why there’s a lot of red and yellow and a lot of light. When I was searching for the woman of my life, I was also in search of my art.”

Solotzew also worked in sculpting and stained glass earlier in his career, but now he’s fixated on developing his skills as an avant garde painter.

In one instance, says Marina, Solotzew was offered a job as an instructor at an art college in Boston and demurred.

Why did he decline? Because he says he’s still a student himself. Solotzew has resisted the impulse to paint what other people tell him to paint. He’s been told there’s more of a market for abstract art, but he’s resolutely determined to follow his own muse.

“I have enough skill to do any kind of painting. Abstract or realistic or anything,” he says. “But I believe that I’m going on my own path and that my path is right. That’s why I create what I do. I believe this art will be the future. I believe I belong to the future, and I want my art to be the witness of our era. That’s why I put a lot of energy and a lot of meaning into it.”

Now, at age 65, Solotzew doesn’t believe in the numerical concept of an artist’s prime. Every artist is different, he says, and their prime hinges on their understanding, not their age.

“The artist never retires. He always works all the way until he dies,” says Solotzew, who has three adult sons. “The prime of an artist is when he reaches an understanding of something higher than himself. …It’s not about age. It’s about understanding.

"It could be a 10-year-old boy who suddenly gets it and he gets it more than a 70-year-old man. It depends on what you’re looking for and in the end you’ll find what you need. But you need to continue searching. It’s a constant quest.”

When asked about his favorite artists, Solotzew says he favors Matisse and Chagall. He does not like Dali or Picasso, but that’s not about their level of craft. He says he doesn’t like what he knows about Dali and Picasso as people, and that impacts his love of their art.

Does that mean that he identifies more with the painters of his age? Not really.

“If you have at home a perfect French cuisine restaurant and you’re a connoisseur, why would you go to McDonald’s?” he asks. “I’m not against contemporary artists. If they come to me, we speak on the same level. But I don’t see anybody who can teach me anything.”

Art, for Solotzew, is more than a career and a passion. Marina Solotzew likens it to an addiction in that her husband cannot live without his craft. His paintings can sometimes take more than a month to come to fruition, but that doesn’t count the time they live in his mind.

It’s almost like he’s pregnant, says Marina, in that he carries the art and it consumes his every waking moment.

And in some cases, it even keeps him awake at night.

“I ask him if he’s sleeping because he’s lying awake and looking at the ceiling and he says, ‘No, I’m thinking.’ And I know when he’s thinking about the painting because he doesn’t hear me and he looks through me,” says Marina. “Nothing touches him. Nothing matters except what he thinks about this painting. And he can do that a week. He’s like in a different state and a different realm. He only paints when he’s happy. And he’s happy when he paints. It’s just like a circle receiving that energy. He brings a lot to the canvas and then it’s like the canvas is reflecting it backward onto him. Sometimes, the canvas reveals that he has a problem.”

When that happens, Solotzew doesn’t just paint over what he sees. He begins anew with a fresh canvas and inspiration.

He prefers to listen to a few specific musical artists when he works.

It’s not so much their music, says Solotzew, but it’s how they make him feel. It’s their general essence, and it’s the frequency of their music set to the tempo of his brush strokes.

It’s that same mentality, he says, that translates to his own work.

Solotzew will stage an event at Art Ovation in May where he paints over a brick from the Berlin Wall, and in that figurative canvas that’s so evocative of his life’s journey, he hopes to keep the inspiration moving. 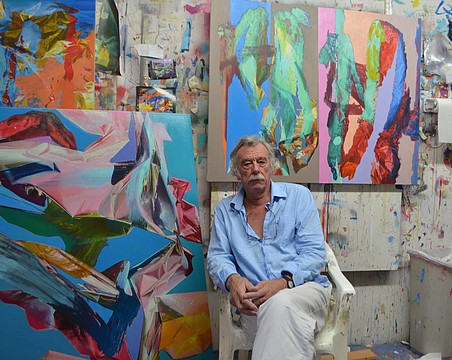 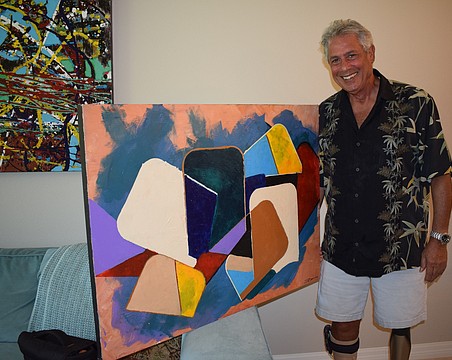 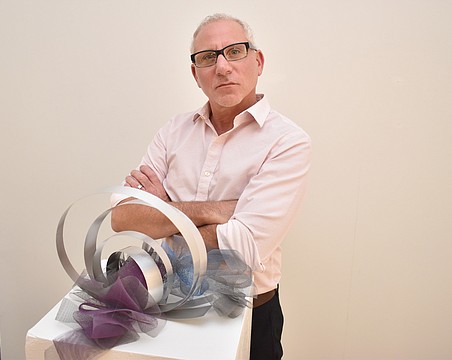 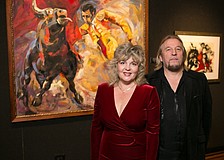 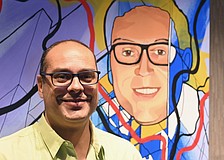 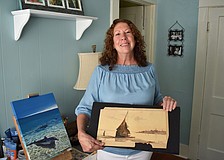 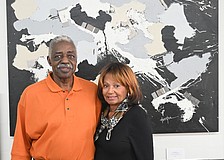