Twenty years ago, Bradenton’s Dwight Fitch became a doctor specializing in cancer treatment after meeting a patient with testicular cancer while on a rotation during medical school.

Fitch sat with the patient and talked to him about what he was going through and his treatment plan.

“He looked at me genuinely and said, ‘Thank you so much, you’re the first person to tell me what’s going on,’” Fitch said. “It struck me. It was incredible that all these people had seen him and no one took the time to actually explain it to him in a way in which he could understand."

Fitch said one of his strengths is the ability to build a rapport with his patients because he can explain complex situations in ways in which they understand. He said his patients can sense that he cares.

The treatment center, which is Advocate Radiation Oncology’s seventh location, opened to patients March 23 with Fitch as the lead physician.

“Advocate is South Florida’s only sort of more locally owned small radiation oncology firm,” Fitch said. “While we’re small, we are not smaller in experience or breadth of knowledge. The founding partners had been practicing radiation oncology for 25 to 30 years, and they’re responsible for creating some of the largest oncology and cancer organizations the country has.”

Having the new cancer treatment center on State Road 64 in East County means residents in Manatee and Sarasota counties won’t have to drive as far to get quality cancer treatments.

“I was driving to Tampa recently and I looked at the different ways to get there and all I saw were red lines and delays,” Fitch said. “A trip to Tampa from here can be easily between an hour and an hour-and-a-half. For someone who wants to get treatment for six weeks, two-and-a-half or three hours a day in the car is a lot on top of already being sick. Having the same treatment available here with the same machines, the same training from physicians, is a benefit to all.”

The treatment center has Varian technology, including the Halcyon, Identify and TrueBream radiotherapy systems. These machines and systems help oncologists determine a more precise location of a tumor so they can provide a larger dose of radiation to the tumor more accurately. As a result, treatments are safer and take less time, Fitch said.

Fitch said there’s a big push toward hypofractionation, which is a treatment in which the total dose of radiation is divided into large doses and treatments.

Advocate Radiation Oncology is a practice based out of Fort Myers with locations in Bradenton, Port Charlotte, Fort Myers, Cape Coral, Bonita Springs and Naples.

“Treatments that were six to seven weeks, we can get done in a week,” Fitch said. “To do those treatments, it requires machines that can localize a tumor at that moment.”

Fitch said the technology allows oncologists to see exactly where the tumor is just before treatment whereas in the past, oncologists had to estimate the position of the tumor based on outside or surface markers.

Fitch said Advocate Radiation Oncology is different from other treatment centers because of its focus on compassion for patients.

“The way I look at it, it’s four parts compassion to one part technology,” Fitch said. “I’ve found over the years that it’s important to be the smartest guy and study and do research and everything. But when it comes down to it, when you’re sitting across from a patient, it doesn’t matter how many degrees you have or how many papers you wrote. What really matters is can they feel that you care.” 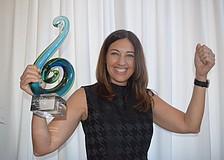