The owners of the Bradenton franchise are bringing the frozen treat eatery to the Ranch.

Steve Mountcastle, the co-owner of Jeremiah's Italian Ice of Bradenton, figured it was time to deliver to Lakewood Ranch.

No, not by driving his desserts there but by opening another Jeremiah's Italian Ice franchise.

Mountcastle said he was getting several Lakewood Ranch residents who made the drive to visit his Jeremiah's franchise at 2525 Manatee Ave. W., Bradenton, since he opened that one with his son and co-owner, Jake Lopez, in April 2021.

Like all Jeremiah’s locations, which are located in 11 states, the upcoming Lakewood Ranch location at State Road 70 and Lorraine Road will offer three signature items: Italian ice in more than 40 flavors; soft-serve ice cream in three flavors, vanilla, chocolate and vanilla/chocolate swirl; and finally what Mountcastle said is the most popular item, the Jeremiah's Gelati, which features alternating layers of Italian ice and ice cream in one cup.

“We have a lot of big flavors,” Mountcastle said.

Those flavors will be delivered by Mountcastle, Lopez and Lopez's wife, Lauren Lopez, in Lakewood Ranch, which will be the 65th Jeremiah's Italian Ice franchise in Florida.

“Our ice is able to play ball with actual ice cream,” Jake Lopez said. “It really blows people's minds, thinking that their cookies and cream is water-based at the same time it is cream-based — that they’re having something that is truly, by definition, Italian ice, even though it will melt in your mouth. It is a different experience than you would normally get anywhere else.”

Mountcastle said the key is getting people to try it. Then they fall in love.

During middle and high school, Jake Lopez frequently visited a Jeremiah’s in Winter Springs, where the family used to live.

He said he recalled that an area manager for Jeremiah’s would stop at his high school on Wednesdays, either selling or giving away products.

“I thought it was so cool,” he said. “I was touched by their involvement in the community and by the ability to put a face to the name. I wanted to use this as a platform to do the same for other community members.”

The establishment of the Bradenton location began when Mountcastle wanted to set up Jake Lopez in a business. He said he had the idea while he was standing in line at the Winter Springs' Jeremiah's. Mountcastle’s wife, Lisa, then used her employer Restaurant Equipment World to connect with the founder of Jeremiah’s, Jeremy Litwack.

“And the rest is history,” Mountcastle said.

Mountcastle said his personal favorite flavor is cake Batter, which he described as tasting like a Biscoff cookie. He said another excellent flavor is Orange Smash, which produces the flavor of a Dreamsicle when combined with vanilla ice cream in a Gelati. He also said one of the preferred flavors of children is cotton candy, which he described as “like an iced cotton candy” and “very colorful, very vibrant.”

Lopez said a good place for customers to start is with the store’s core combo Gelatis, which are based on guest favorites since the opening of the first Jeremiah’s in 1996. He said some Italian ice flavors that form a core combo with vanilla ice cream include mango, cookies and cream, strawberry, and piña colada.

He said that core combos are also formed by the Scoop Froggy Frog (mint chocolate chip) ice and the swirl ice cream, and by the P-Nutty ice, made with peanut butter, and the chocolate ice cream.

About the business: A frozen dessert chain, Jeremiah's Italian Ice offers finely-crushed Italian ice in a wide variety of flavors, soft serve ice cream and layered combinations of both treats.

Lopez said the appeal of Jeremiah’s is that it aims for authenticity in its products, eliminating many preservatives and chemical ingredients. He also said that menus are available for those who follow vegan, gluten-free or dairy-free diets and that some flavors, including the piña colada and coconut, are highly similar to ice cream in texture, despite being vegan.

Although he wants the store to be known primarily for its products, Lopez said, he also hopes to offer five-star guest service. If an employee is absent on a certain day, he wants customers to ask about that employee. 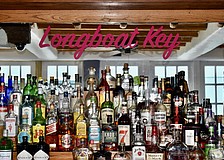