Craft beer aficionados don't have to travel far to quench their thirst. Lakewood Ranch has become a go-to destination for craft beer enthusiasts and entrepreneurs.

Lakewood Ranch is celebrated for its vast green spaces, sports events, recreational activities and upscale residential neighborhoods. Over the past few years, it’s earned a new claim to fame. The latest buzz is all about beer.

Lakewood Ranch and environs are now a go-to destination for craft beer enthusiasts and entrepreneurs. The region boasts two nearby breweries and at least 10 venues dedicated to serving craft beer.

Jeanne Dooley, the owner of Craft Growlers to Go and Tasting Room on Lakewood Ranch’s Main Street, is one of Lakewood Ranch’s craft brew pioneers. When she opened Craft Growlers in 2016, it was the only spot in town with a wide range of craft beers. Today, it’s a thriving, bustling hangout for folks who love great beer and great company. Dooley, a former PGA pro, had first planned to create a to-go venue where Ranchers could grab a growler and take it home to enjoy. Launching a sit-down pub was not her original idea.

But, as Dooley discovered on day one, her customers had a different idea.

“On opening night, it was clear to me that our customers saw us as a place to gather. They wanted a pub where they could hang out and enjoy inspired craft beer.”

Like any smart entrepreneur, Dooley reinvented her original model and gave her customers what they wanted. She changed Craft Growlers’ look and feel and now offers 45 taps, half of which are regionally brewed craft beers. And, yes, patrons can still grab a growler (or two) to go.

Craft Growler’s success is a local example of the national craft beer craze that swept America in the early 2000s. Craft beer enthusiasts developed a taste for artisanal-quality, homegrown brews. An industry popped up to quench their thirst. Then it grew — and never stopped growing. Why? It’s one of those positive feedback loops. The more craft beer is easily available, the more consumers get a taste of it, and the more their tastes change. Craft beer sales go up — and that’s transformed the market. While big beer corporations still dominate, craft beer pubs and breweries are cutting into their bottom line. Craft beer now comprises nearly 30% of American beer sales.

On a local level, Big Top Brewing Co. has been a vital part of that transformation. When Mike Bisaha and Seth Murauskas founded it in 2013, it was one of Sarasota’s first craft breweries. Big Top made a name for itself with such beers as Circus City IPA, Hazy Highwire, Intercoastal Amber Ale, Hawaiian Lion Porter (rated Florida’s top porter), and Ringmaster Raspberry Sour. In the years that have followed, the company has seen meteoric growth. Its beer sales now comprise 70% of Florida’s craft beer market. That percentage should expand once the company completes a 24,000-square-foot production facility in the Fruitville Commons, with an additional 28,000 square feet of outdoor seating.

In 2021, Big Top took over the former Cock & Bull taproom on Cattlemen Road and recently acquired the Naughty Monk brewpub on Lakewood Ranch Boulevard. Bisaha and Murauskas were smart enough not to mess with success. They renamed the brewpub Naughty Monk Ale Works but kept its focus on the Belgian-inspired beers that made it a hit.

This expanding craft beer universe is great news for local beer aficionados. But what about the entrepreneurs driving that growth? Does the hometown market have room for so many new pubs and breweries? Or is it getting too crowded?

According to Bisaha, the more the merrier. As he sees it, Big Top’s success only helps other Lakewood Ranch-based brewpubs and breweries flourish, too. “Area bars and microbreweries all help each other out,” he says. “Nobody planned it, but a local support network just kind of grew up.” Bisaha adds that Big Top lacked this support when he and Murauskas launched their enterprise. He knows what it’s like to be on his own, and he’s delighted to serve a supporting role for others in his field.

Stu Drymon is glad for that support. He and Darrell Jackson founded 3 Car Garage Brewing, a small craft brewer on State Road 64 near Lakewood Ranch that opened its doors just six months before the pandemic. Drymon says they owe a debt of gratitude to Big Top. Thanks to its help and mentoring, the 3 Car Garage venture survived its dicey launch. After that?

Drymon says it took 3 Car Garage about three years to grow from home microbrewing to brewing on a retail scale for area craft beer consumers. That progress was marked by a series of baby steps. First 10 gallons. Then 50. Then upward to 300.

What’s Drymon’s advice to any brave soul planning to launch their own craft beer brewery?

Basically, think big. And don’t underestimate the time, money, and sweat equity required to make your brewery a success.

“Getting a new brewery on its feet always takes twice as long and three times the money as what you originally imagined,” says Drymon. “If you think it’ll take a year to build out, it's going to take two years. If you think you need $500,000, you’re going to need $1.5 million. Every time you turn around, it’s another $5,000.”

Brewers don’t cry over spilled beer or cost overruns. It’s just the cost of doing business. In Lakewood Ranch, business is booming. But there’s still room for start-ups in this ever-expanding universe.

Getting into the craft beer game takes hard work and smart planning. But forces beyond your control can throw you out of the game. Craft beer entrepreneurs know it. So they hope for the best, and plan for the worst.

Like, say, the collateral damage of a global pandemic.

Inner Compass Brewing Co. can tell you all about it. The former Sanford-based brewer recently broke ground on a 1.6-acre facility in Lakewood Ranch. When the dust settles, it will eventually boast a 2,800-square-foot outdoor patio styled after a beer garden.

Susan Carrubba, Inner Compass’ co-owner, plans to open this December. After that, she hopes to make it one of the Ranch’s largest craft beer venues. But her ambitious brewpub startup was almost a non-starter.

“It’s taken us two years to get this in the works,” she says. “Thanks to construction delays and supply chain disruptions, the timing’s been rough. But we finally closed on financing last January. And then we broke ground. So we’re off and running.”

Inner Compass isn’t the only new game in town. Good Liquid Brewing Co., overlooking the lake at Waterside Place, offers up 18 taps of beer, along with hand-crafted cocktails and spirits. According to owner Joe Guli, the company is also building a distillery in Lakewood Ranch. “We’ll be making our own spirits — from gin to vodka to bourbon. We’ll have beer too, but our vision is for more of an after-hours, after-dinner lounge. You’ll go there to relax and enjoy a nice craft cocktail.”

Ambiance: Picture-perfect waterfront location and a full menu filled with hearty burgers (including veggie), sandwiches, wood-grilled “brewzettas” (pizza), and steak and seafood entrees. On Tap: 20 taps, including two ciders. Something Different: After all that good liquid, patrons can play volleyball in the adjoining park. Info: 1570 Lakefront Drive, Lakewood Ranch; GoodLiquidBrewingCompany.com.

Emerging craft beer entrepreneurs can rely on peer support in Lakewood Ranch. But that’s no guarantee of success. They’ve still got to do the hard work to get started. And adapt and evolve once they do.

That Darwinian logic applies to long-standing craft beer venues, too.

Ed’s Tavern on Main Street in Lakewood Ranch is one example. When it opened in 2014, the pub only carried about eight beers. A lineup of the usual suspects — Budweiser, Bud Light, Coors Light, Miller, etc. But that lineup evolved and grew. Now Ed’s offers 31 taps, including dozens of local and national craft brews. Bob Bender, the pub’s owner, says that nearby venues inspired him to adapt to changing customer demands.

Ambiance: A sports bar with trivia nights, live music and poker. Sip an ice-cold brew on the patio overlooking the water.

On Tap: More than 30 craft beers on tap and dozens of IPAs, ciders and sours, stouts and porters, and cans, bottles, and flights. Want a Heineken? No judging or shaming here.

Something Different: Try the $6 appetizers during Happy Hour every day

According to Bisaha, the craft beer evolution never stops — and it takes a village to make it successful.

“We don’t see other pubs and brewers as competitors,” says Bisaha. “Somebody else’s customer could enjoy a locally brewed beer. They might say, ‘This is great — where’d you get it?’ And the server might send them to us. One of our customers might ask us the same question — and we’d send them to the source. It works both ways.”

“The better Main Street does, the better we all do,” Bender says. “We benefit from each other’s success and expertise.”

Bottom line? Lakewood Ranch’s craft beer entrepreneurs are all playing well together. Instead of cut-throat competition, they help each other grow. Their common goal? To put Lakewood Ranch on the craft beer map — and entice beer lovers across the region with exciting new choices. Right now, that’s exactly what they’re doing.

Let’s drink to that!

Ale: Beers created using yeast that ferments from the top-down.

Craft Brewery: An independent brewer with a small operation.

Brewpub: A pub that brews its own beer and sells at least half of it on-site. These often include a restaurant.

Growler: Basically, a portable keg. An airtight glass jar, containing either 32 or 64 ounces of beer. Most craft breweries sell them.

Hops: A flower that preserves beer and gives it a resiny smell and just a hint of bitterness. (The vine producing this bud is a family relative of cannabis.)

IPA (India Pale Ale): A seriously hopped and wicked strong ale. The British invented it as a way to keep beer from spoiling on the passage to India.

Lager: Beers created using yeast that ferments from the bottom-up.

Malt: A grain (typically barley) that’s soaked until it sprouts, then gets cooked and dried out. This process creates sugar, which gets caramelized when it’s heated.

Microbrewery: A brewery with a small-scale output. They usually produce specialty beers for a locals-only market.

Nanobrewery: A brewery or brewpub producing less than 15,000 barrels of beer a year.

Pilsner: The Czechs invented this one. It’s the first generation of light, clear beers. 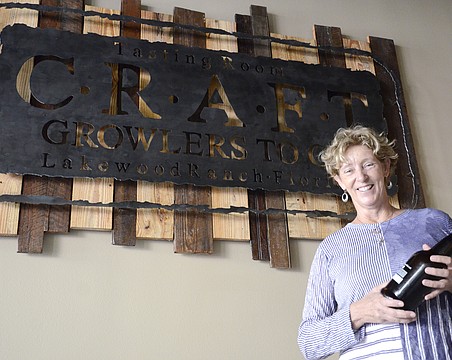 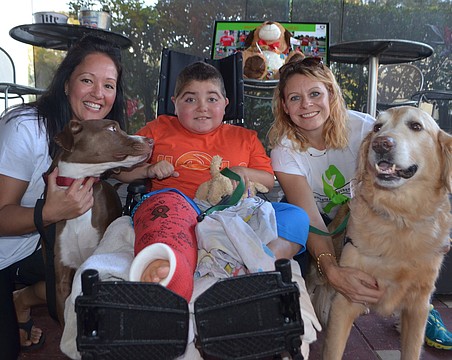 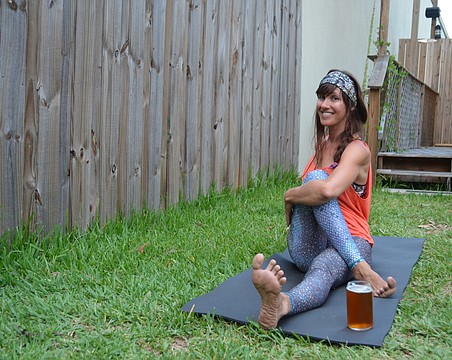 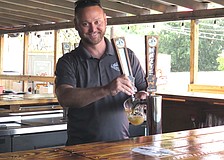 Commercial or craft, beer drinkers unite over some frosty brew 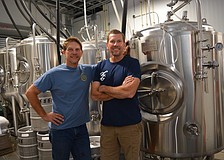 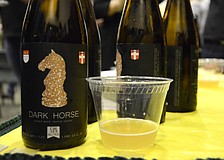 Hops to the top 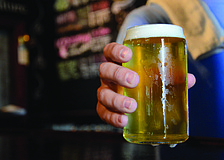 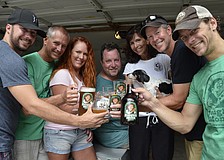