The daylong arts festival was held on May 15.

Ariyana Rivera and Sondra Jimenez act together on stage.

Ariyana Rivera and Sondra Jimenez act together on stage.

Alyssa Martin of the Music Compound welcomes on new students to play.

Alyssa Martin of the Music Compound welcomes on new students to play.

Ezra Lerario and Alix Leinweber play a variety of songs.

Ezra Lerario and Alix Leinweber play a variety of songs.

Ezra Lerario sing to an audience.

Ezra Lerario sing to an audience.

Ezra Lerario sings to an audience.

Ezra Lerario sings to an audience.

For a long season, the Van Wezel Performing Arts Hall has been quieter than usual.

That changed on May 15, when the Van Wezel space and grounds were filled with music, singing and laughter of Booker Middle School students and families as part of a new partnership.

The first VPA Festival of the Arts — a joint effort between Booker Middle School, Van Wezel Performing Arts Hall and the Van Wezel Foundation — highlighted the middle school's various visual and performing arts programs by giving more than 100 students the chance to share their artwork, music and performances in the Van Wezel and its outdoor area. Students took existing performances and artwork they'd been practicing and brought them to the Van Wezel to entertain friends and family.

Families and groups arrived at the Van Wezel for scheduled segments to see their children perform to reduce crowding and keep social distancing rules in place.

Sixth grader Ezra Lerario and seventh Alix Leinweber put on a show on the patio by playing guitar and singing with other modern-band class students. Lerario picked his favorite Red Hot Chili Peppers song 'Can't Stop' while Leinweber was drawn to "How to Save a Life" by The Fray as she felt it matched her voice. The pair ended with the internet joke hit "Never Gonna Give You Up" by Rick Astley. The duo have had a blast getting ready for the show and being able to perform it live together.

"It's an amazing playing live because everyone has eyes on you," Leinweber said. "Sometimes that can make you feel enclosed while other times you're like 'Oh my gosh, this is actually happening'."

"This is our second (live performance)," Lerario said. "This is definitely bigger."

Students' 2D and 3D art was put on display inside the Van Wezel main lobby area where families looked through the many types of art. Sixth-grader Matilda Casart had a painting of two faces close together. She picked up the idea while learning about abstract self-portraits in class and used acrylic paints to paint the full picture.

"It shows there's two sides to things but they're together still," Casart said.

The Van Wezel's main hall was used for drama, dance and musical theater throughout the day. Eighth- grader Savannah Ivery spent the day performing "The Horrible Catastrophes of Middle School" as part of the drama segment before taking a short break and returning to the stage for modern and ballet dance productions

It'd be some time since Ivery had performed in front of a large audience and she said she felt great getting back out there.

"My heart was racing but it was exciting and fun," Ivery said. 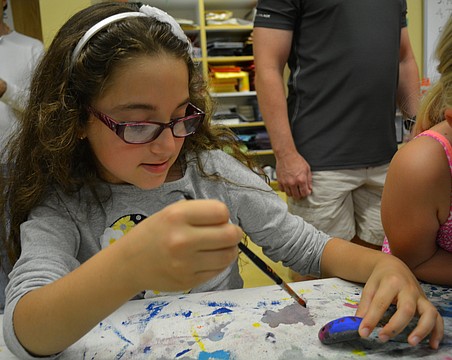 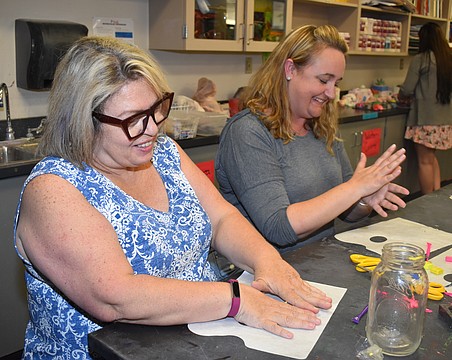 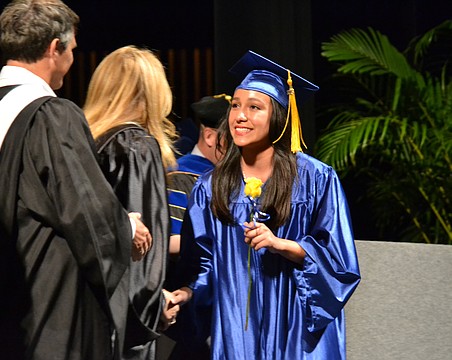 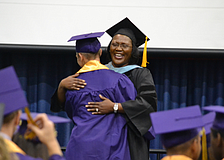 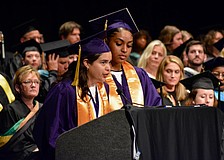 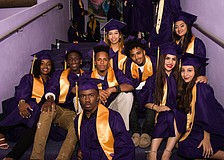 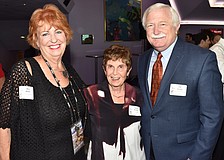 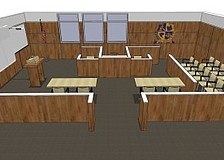