E-bikes can be an option for everyone in Sarasota

There are three classes of e-bikes, with key differences between them.

Two years ago, the Dowdell family had two cars, which they used to take themselves everywhere.

Rory and Krista Dowdell simply drove their children — then two in number, now three — around town as needed. The system was fine, but something was lacking. Rory Dowdell said he and Krista both enjoy CrossFit workouts and, at the time, were thinking about training for a triathlon. A one-hour session wasn't enough. They were craving more of a workout, he said, and started to think about creative ways to do that while still being around their kids.

"We thought, 'What if we biked to the workout?'" Dowdell said. "Our gym is about 5 miles away. Driving, it takes us 12-14 minutes. We looked, and on a normal bike it would take us 25 to get there. That was too long. But on an electric bike, it would only take 14-16 minutes. Since we could do the commute in about the same time and get that extra workout in, it became worth the investment."

In October 2018, the Dowdells traded in one of their vehicles and purchased two Riese & Muller electric bikes, becoming the latest family to make the switch. The U.S. is late on the trend. According to the Verge, electric bikes, or e-bikes, account for just 4% of total bike sales here. In some European countries like the Netherlands (68%), there are more e-bikes sold than regular bikes. But it is growing here: According to research firm NPD, e-bike sales jumped 91% from 2016 to 2017, then 72% from 2017 to 2018.

In simple terms, an e-bike is a bike with a motor, a battery and a controller built into it, allowing riders to increase their speed while pedaling less frequently or with less vigor. There are three classes of them. According to Isaac Sierra of Sarasota's Shoreline Ebikes, Class 1 bikes feature a technology called "pedal assist," which means the bikes gives you assistance based on the cadence of your pedaling. Riders can choose to have more or less assistance. These bikes are capped at 20 mph. Class 3 bikes feature the same technology but can reach speeds of 28 mph. It is the Class 2 bikes, Sierra said, where things change. These bikes do not trigger their assistance through pedaling but rather through a throttle, similar to a moped. These bikes can reach speeds of 20 mph.

"We don't recommend [Class 2s]," Sierra said. "They are not easy to pedal. If you have an injury, it is hard to control your speed. People end up just using the throttle and not getting a lot of exercise."

The benefits of switching to an e-bike are numerous, Sierra said. For older riders who don't think they have the strength to ride a bike, an e-bike can handle the majority of the load. Sierra said it is easy to pedal them, even for those with weak or injured legs. Because the bikes take less of a toll on your muscles, Sierra said, riders feel better afterwards and are more likely to ride frequently as a result.

The one drawback is cost. A sturdy e-bike intended for frequent use can cost between $1,000-$3,000. For bikes meant to be car replacements, like the Dowdell family's bikes, that price can jump to $5,000-$6,000. But Sierra said the cost is worth it. If you buy a cheaper bike, he said, it's likely to be a "one-time use" bike, meaning that if part of it breaks or malfunctions, it cannot be fixed, and a new bike must be purchased. Bikes from leading companies like Riese & Muller are more likely to last a long time, and if something does go wrong, they use parts from trusted companies like Bosch and Schimano that are easily replaced.

In addition to brick-and-mortar stores, there are various retailers selling e-bikes online. Sierra said he urges his customers to do their research and determine which bike would be the best fit for them. The nonprofit People for Bikes, he said, is a good place for riders to begin.

"We do more education than we do sales," Sierra said. "I truly do think e-bikes will be a big component of transportation in the future, especially in urban areas. They are good for the environment. They lessen traffic on the roads. There are people here already living that life."

Rory Dowdell is one of them. Dowdell said he has no regrets about trading in a car for his family's e-bikes, and he has since purchased another e-bike to accommodate his growing family.

"It was a little challenging in the beginning," Dowdell said. "We had to plan out our trips more. Now, 90-95% of trips within an 8-mile radius we're doing on our bikes. I even went to jury duty on my bike." 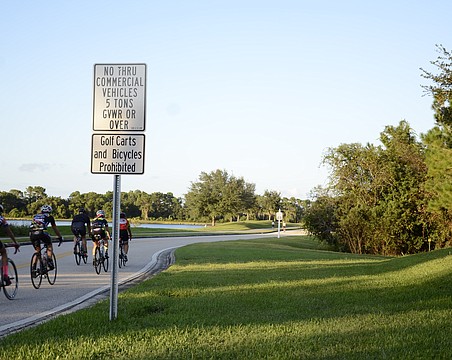 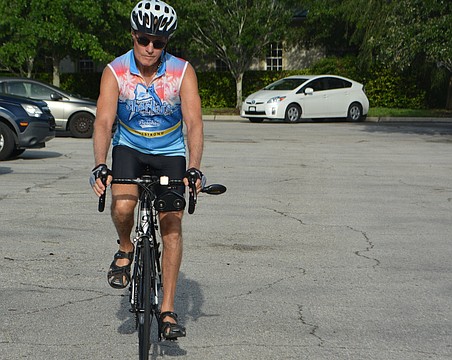 Cyclists get a break in Lakewood Ranch 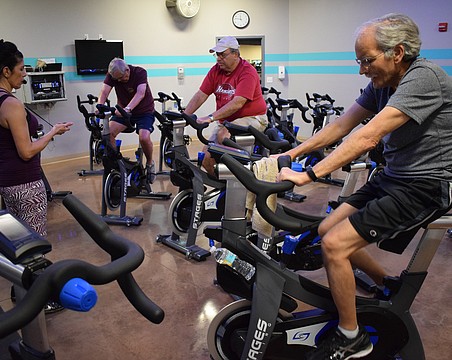 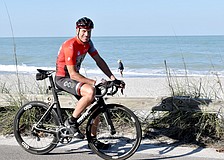 Sarasota cyclist is pedaling for safety 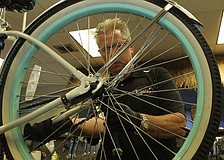 Back to the Bike 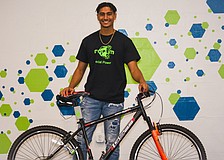 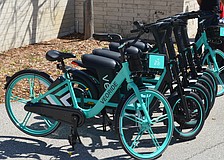