Ninos is more friend than barber to his longtime customers, who keep coming back to the chair for chatter and camaraderie.

Manny Ninos is an artisan of a dying craft: The friendly neighborhood barber, always good for a chat and a cut.

Since 1987, Ninos has been the go-to barber for dozens of Longboat Key men, a reliable stop for just the right amount of chitchat (or none at all) and a “damn good haircut,” in the words of longtime customer Bob Gault. Ninos has garnered a crew of regulars across his barbershop affiliations over the years, some of whom he’s known for 30 years. Through it all, he’s always been in the buildings near 5620 Gulf of Mexico Drive where Tina’s Beauty Salon, his current place of business, is.

“Manny is the epitome of the old-time barber,” Gault said.

He’s had plenty of time to perfect the persona: Ninos has been working in the business since he was 10  and sweeping floors, as he was growing up in post-war Greece and needing money for his family. Everyone worked then, he said. He never went to school, instead learning how to cut hair by watching the men he worked for. By 13, he and an older mentor had a business together and Ninos was quite literally the breadwinner of his family, earning enough tips to bring a loaf home for meals.

Ninos moved to the Longboat Key area from Massachusetts in 1987 with the salon’s eponymous Tina Panagiotopoulos and her family. They opened a barber shop and salon next door to each other, and Ninos worked his own business until a brief retirement in 2007. He came back to save his customers from the people he’d given his business to — destroyers of his hard work. With his work ethic and customers’ loyalty, he quickly righted the issue.

“They don't respect the people, and of course I feel I have responsibility with the customers, so I came back to Tina's Beauty Salon,” Ninos said.

At his “retirement,” Ninos was celebrated at a party at the Observer’s Longboat Key office. Commissioners, residents and the mayor came to send off the honorable hairdresser. Of all the retirement parties the Observer has thrown over the years, this retirement is the one that didn’t stick, former customer David Beliles said. Ninos was back to work in no time, saving hearts and heads from devastation. He recalls the front-page Observer headline proclaiming, “Manny’s Back” from when he returned to work.

“I was really excited to come back when Manny came back to work,” Gault said. “I look forward to it every time, chatting with him.”

Gault is adamant that Ninos is the “nicest human being (he’s) ever met,” a man with a gift for smart chatter and respect for everyone. When Gault gets his haircuts (he recently got a badly needed trim post-shutdown), they talk about anything ranging from Greek politics or television to sports. Ninos is a Boston man who loves the Patriots and Celtics, while Gault is a San Diego transplant who now roots for the Buccaneers.

“He keeps me up to speed on what's going on on the inside stuff,” Gault said. “He was a little bit confused about Tom Brady and Gronkowski going to the Bucs, but I personally am thrilled to death. It's honestly therapy for me to go visit with Manny. It's just fun to chat with him about anything.”

Ninos echoes the same about his relationships with his customers — he feels more like a friend than a barber, he said. Customers came with him to Tina’s after he left his own shop, so he’s heard their stories for years, their political chatter and family gossip. It’s part of the business, he said, knowing how to talk about varying topics over the course of a cut.

“You have to adapt to different people,” Panagiotopoulos pointed out. “You’re here to listen, you’re not here to talk to people.”

At times, Ninos has had a rockstar’s popularity — in Massachusetts, the line stretched to the corner of the street, and when Ninos opened later to get a little extra rest, Panagiotopoulos saw the line double. On Longboat Key, he would come in through the back door to have a little peace and quiet to read his newspaper before his adoring customers showed up, Panagiotopoulous said. They handed out numbers to keep customers in line.

“You had to get lucky to see Manny,” Panagiotopoulos said.

Panagiotopoulos and Ninos have been friends for 40 years, since their time in Massachusetts. She calls him the “perfect friend” and her mentor in business (the only time they even playfully argue is when he turns the thermostat up). He treats the business as his own and his years of experience buoy the salon along. He’s just the top, she said.

“We keep saying we’re going to clone him,” Panagiotopoulos joked.

Now 82, Ninos is not stopping. He takes all the customers he can fit into his schedule, bringing folks in as fast as possible after the long break between haircuts from the pandemic.

“The people in Longboat Key, I believe they are the best in the U.S.,” Ninos said.

As long as he’s been on Longboat Key, he’s worked to serve the people of the island, giving them the service and haircuts he thinks they deserve. 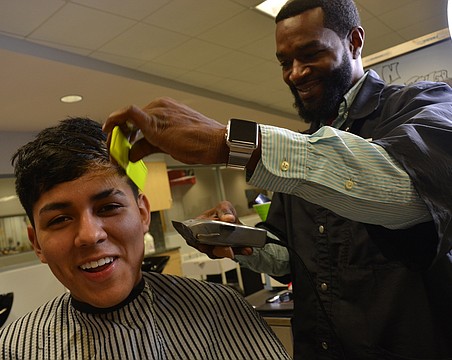 Bradenton barber is a cut above the rest

Store Around the Corner: Crossover Cutters 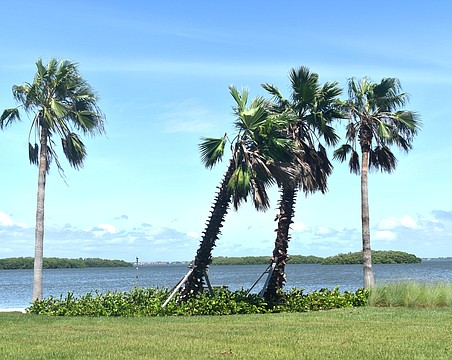 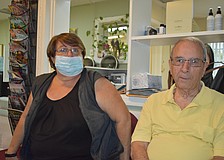 Tina's Beauty Salon to close at the end of August 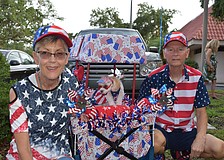 Welcome Back: Here are 10 more stories that we liked from last summer 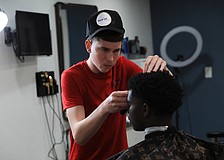 New owners cross over to make the cut