These two 530 Burns Gallery artists are proving that women have a place in the art world.

Art was once a man’s game. Names like Vincent Van Gogh, Pablo Picasso and Leonardo Da Vinci are synonymous with artistic genius, but if you search “most famous artists of all time” in Google, only five of the 51 photos at the top are of women.

However, the artistic landscape is changing. According to the National Museum of Women in the Arts, 51% of visual artists in the U.S. are women.

Sarasota’s 530 Burns Gallery — owned by mother-daughter duo Nikki Sedacca and Montana Taplinger — celebrates female artists every season. Two such artists with work currently on display are Kathe Fraga (who currently has a solo show) and Linda Richichi (whose work is always hanging at the gallery).

Kathe Fraga lives in a 100-year-old home on Bainbridge Island in Washington that embodies her artistic inspiration. Looking through the windows overlooking the two Japanese maples in the yard makes her wonder how many people experienced the same scene before her.

“I love historic, old things,” Fraga says. “(Like when) you move a cabinet and you find old wallpaper or where someone painted the wall ... It’s like that with my paintings, as if they’ve evolved over many generations and people have added something of their own.”

She’s most influenced by the romance of vintage chinoiserie, so her work utilizes the motifs of flowers, birds and other natural elements with a feminine edge. Fraga paints primarily on birch panel, which she applies to what she calls a “frescoed frosting.” The result is a subtle, weathered texture featuring bold swatches of color layered atop dappled florals — all meant to look like an old wall you might find in a French chateau.

Linda Richichi is a colorist and resident of Sarasota who started her art career as a plein air painter.

“I work to capture the energy from the outdoors,” she says. “And that outside feeling comes inside using color.”

Richichi derives great inspiration from impressionist painting, and it shows in her purposefully visible brushstrokes and heavy emphasis on realistic light. Each piece starts by establishing sunlight patterns in a landscape or scene she wants to capture, she says, and then she pays attention to the area touched by the sun.

“I look outside and go around to see what feels like it connects to my insides,” she says. “I look at that and try to say it in words that anyone who’s not an artist will understand.”

Fraga, who has never been to Florida, discovered 530 Burns through social media. Sedacca had seen her work on Instagram and messaged her, thinking it would be a perfect fit for the gallery.

“To be included in the group that the gallery has so carefully curated is a true honor,” Fraga says. “We (she and her husband, Jeff) are fascinated by old homes, so we were intrigued by the location of the gallery in Burns Court.”

Richichi is originally from New York, but she says Sarasota is her permanent home. Upon moving she was drawn to 530 Burns because of its contemporary nature, and originally she made a studio in the gallery itself, paining amidst the other art. Now she works a couple blocks away in her home.

She wanted to be represented by 530 Burns because of its positive, colorful energy that made her confident she would be free to express herself, unlike more traditional galleries where she tended to rein in her creativity.

“It’s refreshing to have people get what you’re doing,” she says. “In New York people liked more traditional work … but here, the light is so bright and people like more abstract, so my palette has gotten brighter and freer.”

Both painters are highly influenced by the natural world, but the messages (or lack thereof) they hope to get across differ.

“Sometimes I’ll put in a message but it’s more of a pattern and color,” Fraga says. “(Regardless,) working with those motifs of blooms and birds is very uplifting.”

She works on several paintings at once to free her mind and let messages arise naturally because “each can tell their own story.”

Richichi wants to demonstrate the positive healing energy of nature that brings her to a meditative state.

“Nature is our greatest teacher, so when I paint outside I forget the world and I’m just in the now,” she says. “People light up when they see the work, and my objective has been met when that happens.” 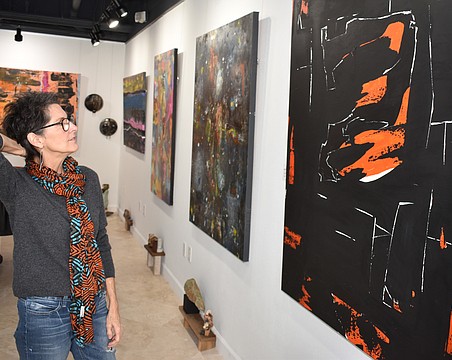 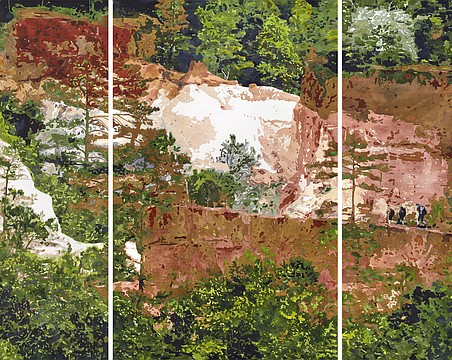 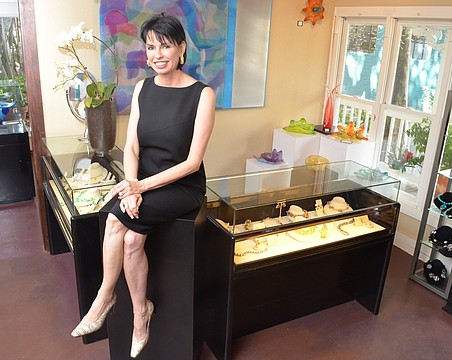 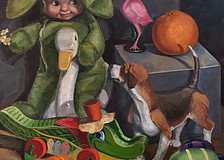 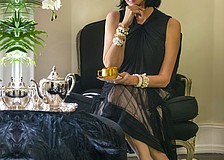 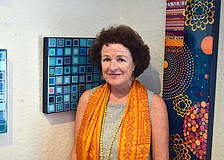 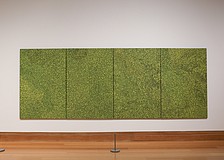 The Ringling's 'Interpolations' and 'Order Systems' exhibits go beyond the abstract 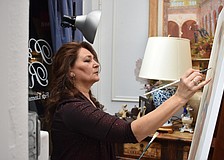 Artist Violetta Chandler paints her home away from home