Colony developer and orthodontist, who died Thursday at age 91, was at the forefront of turning Sarasota into a global destination for leisure travel.

A child of the Great Depression, Dr. Murray “Murf” Klauber took all kinds of jobs to make money in the 1930s: Soda jerk, gravedigger, paperboy, to name just a few. When he made $200, he bought a car — the first in his family to have a set of wheels.

Another gig: altar boy for the neighborhood Catholic church where he grew up in Buffalo, N.Y. He worked there for four years, getting a quarter per performance. One thing that didn’t come up in the job interview? Klauber’s religion. “The priests and I never talked about me being Jewish,” Klauber chuckled, recalling those days in a video biography of his life published on YouTube earlier this year.

Klauber went on to have a long line of varied jobs. The list includes father of three children who grew up to be uber-successful adults; nationally known, ahead-of-his-time orthodontist;  clothing store operator; restaurateur; never-take-no for an answer salesman; ski instructor and lifelong expert skier, who could be seen, and heard, yodeling down the mountains of Aspen; hotelier; developer; and, even when he couldn’t get people to buy into his vision, master urban planner.

Klauber often a thorn in the side of Longboat officials

Klauber’s ex-employees carry on his legacy of customer service

Klauber’s real estate ambitions stretched into downtown Sarasota and beyond​

And, possibly most notably, Klauber, behind the rise of the Colony Beach & Tennis Resort, was a forerunner in turning the Sarasota-Bradenton region into a global destination for leisure travel. (The Klauber family, after a series of disputes and lawsuits, lost control of the Colony in federal bankruptcy court in 2010 after nearly four decades of ownership.)

Considered a true renaissance man and a visionary thinker by many who knew him — and a sartorial standout who was rarely not seen in a colorful tropical shirt and loafers on his feet, never socks  — Klauber died Nov. 22. He was 91.

“He had a zest for life,” said wine entrepreneur Jack Daniels with Wilson Daniels in Napa Valley, Calif., a longtime family friend and Colony vendor. Daniels and his wife, and Klauber and his second wife, Susie, vacationed together and often went for long walks together on each other’s respective coasts and beaches. “He thought big about everything. There will be a big hole in that community with Murf gone.”

The zest also led to a life, above all else, that focused on fun for Klauber and his first wife Joanna’s three children: Michael, Katie and Tommy.

That dates back to the days the kids grew up in Buffalo. One example: Klauber would choose one of the children, usually as a reward for good schoolwork, to ride in the Corvette to or from the family ski chalet for one-on-one dad time. “He’s unforgettable and irreplaceable to us and so many others,” said Michael Klauber, now co-proprietor of Michael’s on East in Sarasota.

The joy the family patriarch had in life was true to the end, too. Last year Klauber and Susie joined Michael Klauber, and his wife Terri, on a South African safari trip. A gift from a group of friends, the trip was announced at a surprise 90th birthday party family members put together for the elder Klauber at Michael’s on East in February 2017. The party planners re-created the famous Monkey Room from the Colony inside Michael's Wine Cellar to celebrate the occasion.

“This is the best thing that’s ever happened to me in my life,” Murf Klauber told the packed room of attendees while tearing up, talking into a microphone held by Michael. “I love all of you.”

Dr. Murray "Murf" Klauber was born Feb. 9, 1927, the son of Dr. Philip Klauber, a dentist, and Lillian Samuels Klauber. It was from his parents, early on, that Murf Klauber discovered the intrinsic value of giving back to people with no expectation of anything in return. Dr. Philip Klauber, for example, would often do dental work for free for people devastated by the Great Depression. Some patients would later come by the Klauber house with fruit or a plate of food in thanks.

“His kindness impacted so many people, and he was willing to give everyone a second chance” says Katie Klauber Moulton, recalling free meals, small never-pay-back ‘loans’ to people down on their luck and his mentorship of many who worked at the Colony. The list of Murf Klauber mentees includes some of the region’s most noted restaurateurs, such as Sean Murphy with Beach Bistro; J.P. Knaggs with Bijou Café and the late Titus Letschert of Café L’Europe.

The Klauber children went on to successful hospitality careers themselves. “We pursued our careers because of the lessons and laughter and love we learned from him,” said Katie Moulton. “It got in our blood.”

'He had a zest for life. He thought big about everything. There will be a big hole in that community with Murf gone.'

There were the two cars he bought one of the Colony’s early employees, Phil Mancini, now co-proprietor of Michael’s on East with Michael Klauber. One car, recalls Mancini, was a Mustang convertible. The other was a Corvette. Klauber also bought Mancini a 60-inch TV in the mid-1970s, “back when having a TV that big,” Mancini says, “was for the elite.”

Another time, recalls Mancini, Klauber took his protégé on a shopping spree for a whole new wardrobe, to a men’s shop Klauber owned on St. Armands Circle. “He hated the way I dressed,” said Mancini, a Providence, R.I. native who favored short ties and Italian shoes at the time. “He spent thousands of dollars getting me new clothes.”

The Mancini makeover, full of slacks and polo shirts, made a big impression on one of the Colony’s most famous unit owners: national tennis reporter and broadcaster Bud Collins. “Every time Bud saw me after that,” said Mancini, “he called me Polo Phil.”

In addition to his jobs, Klauber excelled in both academics and sports growing up. He starred in rowing and squash at the University of Buffalo, and helped both teams win national championships. He later became a 5-handicap golfer. Klauber also enlisted in the U.S. Navy in 1945, breaking up his undergraduate years. He worked in the navy pharmacy toward the end of World War II and then returned to college. After Buffalo, he earned his orthodontics degree, from the University of Pennsylvania, in 1953.

Working on a dream

Tommy Klauber believes his dad got his passion for life, and his positive and tireless work ethic from his mom, Lillian Samuels Klauber. “I think she saw a future for him and pushed him hard to make his dreams reality,” says Tommy Klauber, who like the other Klauber children worked at the Colony and later went into the hospitality business on his own.

Passion and a positive attitude, along with fun and kindness, is a theme in Klauber’s life that comes up often in conversations with friends.

'We pursued our careers because of the lessons and laughter and love we learned from him. It got in our blood.'

“Everybody would say that Murf is a visionary, and he certainly was, but if I would describe him in just a few words, he was somebody who was completely committed to whatever he was working on,” says Icard Merrill attorney Charlie Bartlett, who met Klauber in 1981 and represented him during the Colony legal disputes from 2006 to 2016. “And he was always working on something.

Bill Kelley, an area painter, says Klauber, who he met in 2000 and became fast friends with, “was a good soul” and probably the most positive person he’s ever met. Adds Kelley: “He never had a bad day.”

That passion carried over to what would be Murf Klauber’s first career love: being an orthodontist. He had a practice, Crown and Bridge, in Buffalo, and he also invented several tools and devices to improve the industry. With that background, Klauber was often asked to speak at orthodontist conference nationwide.

It was on his way to a orthodontist conference, in St. Louis in 1967, when Klauber discovered Sarasota and Longboat Key. His first wife, Joanna, came to town to recover from an illness with some friends. She called her husband and encouraged him to come to the paradise she had discovered as soon as possible. Klauber did, and like his wife, was smitten with Sarasota.

Klauber’s life in Buffalo was an American Dream come true — in addition to the successful orthodontist practice, he ran a restaurant, three clothing retail stores and developed some condos there. But it was the discovery of Sarasota soon after he turned 40 that redefined both his life and his adopted hometown.

That starts and ends with the Colony.

Katie Klauber Moulton recalls her dad, back in Buffalo, announcing at the dinner table he was going to buy the Colony and the family was going to pack up and move to Florida. Excitement, not dread of leaving school and familiarity, ran through the house. “For three kids,” says Moulton, it was magical.”

Murf Klauber then set upon the task of turning the Colony into a unique destination. “The Colony when dad bought it was basically held together with chewing gum,” Michael Klauber said in a video tribute to his dad posted on YouTube. “It was pretty rustic.”

Katie Moulton, in recalling those early years at the Colony, said her dad’s visionary side was what made it all gel. “Sometimes his vision was so big and so bold it took a while to bring it something deliverable,” she said. “But he always thought big. He always dreamed big.”

Changes included making the Colony one of the first resorts or hotels in the country to go all-suite. Another big change: Klauber hired his friend Nick Bollettieri to run a tennis academy there, back when tennis was volleying  between a fringe and niche sport.  Bollettieri went on to launch the IMG Academy in Bradenton, and remained friends with Klauber. “Crazy people do things that people say can’t be done, and that’s why Murf and I got along,” said Bollettieri. “It’s too bad the world doesn’t make more of Murf Klaubers.”

In addition to tennis, Klauber used his customer-service instincts to create an atmosphere of warmth at the Colony — with a side of Florida kitsch. “He had a vision of a casual relaxed playground,” said Katie Klauber Moulton. “He didn’t want to be a Ritz-Carlton or a Hyatt.”

That gave way to a pair of nicknames: shack elegance and beach chic.

Nicknames aside, the Colony under Klauber’s stewardship grew into something bigger and better every year through the mid-2000s. Guests ranged from football coach and announcer John Madden to families worldwide to, the night before the Sept. 11 terrorist attacks, President George W. Bush.

“The Colony was my fun every day of my existence in that era,” Klauber told the Longboat Observer in August, in a special section on the property.

The relaxed vibe of the Colony and Klauber’s kindness belies another side: he also was a shrewd businessman, who sometimes rubbed people the wrong way with his grandiose plans and ideas, and inability to stick with the status quo. Mancini, who worked for Klauber and has remained a close family friend, said “love him or hate him, everyone loved him. No matter who says what about Murf in business, as a person, everyone loved him.”

Klauber, looking back at the Colony in an August 2015 Longboat Observer story, says the good outweighed the bad, even though the financial issues and disputes were a “shame” that could ruin his day when he walked by it. “When I created that, the most important thing was having fun every day,” Klauber added. “We succeeded in that.” 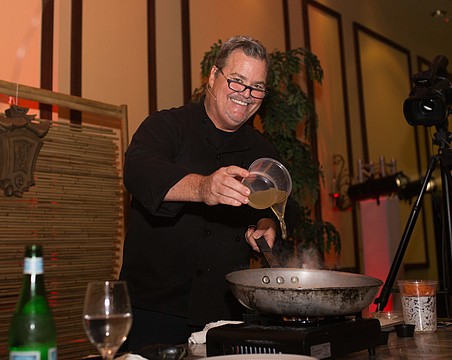 Klauber’s ex-employees carry on his legacy of service 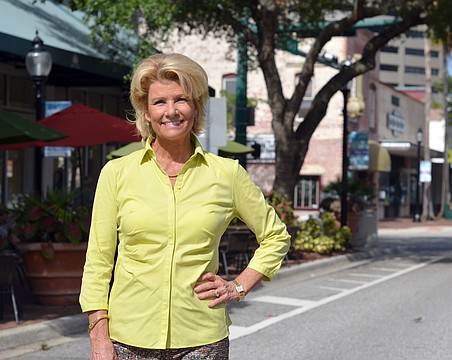 Where is Katie Moulton now? 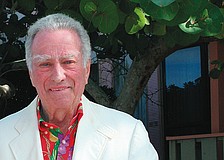 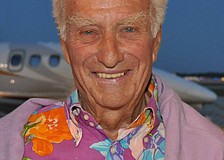 Where is “Murf” Klauber now? 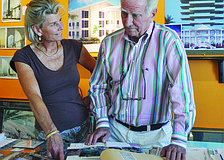 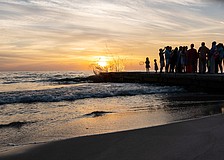 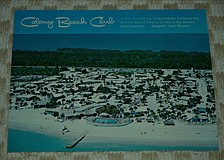