Laura Palomino points out the parts of a lionfish.

Laura Palomino points out the parts of a lionfish.

Ashley Yarbrough, center, measures one of the many lionfish harvested during the derby.

Ashley Yarbrough, center, measures one of the many lionfish harvested during the derby.

Ashley Yarbrough, right, measures one of the many lionfish harvested during the derby.

Ashley Yarbrough, right, measures one of the many lionfish harvested during the derby.

Garrett Stephens holds up one of the many caught lionfish.

Garrett Stephens holds up one of the many caught lionfish.

Servings of pan seared lionfish are prepared for the tasting.

Servings of pan seared lionfish are prepared for the tasting.

Hannah Tillotson gives a demonstration of how lionfish are caught.

Hannah Tillotson gives a demonstration of how lionfish are caught.

Candie Ringling tries her hand at catching a fake lionfish with a spear.

Candie Ringling tries her hand at catching a fake lionfish with a spear.

Landon and Koa Viravong with Josh and Madison Taylor of Team Humpty Dumpty caught the most lionfish with 244.

Landon and Koa Viravong with Josh and Madison Taylor of Team Humpty Dumpty caught the most lionfish with 244.

A lionfish gets measured.

A lionfish gets measured.

Gabby Magalski holds up one of the many lionfish harvested

Gabby Magalski holds up one of the many lionfish harvested

A lionfish gets filleted.

A lionfish gets filleted.

James and Isabella Locascio dissect a lionfish together.

James and Isabella Locascio dissect a lionfish together.

Anyone can help document the lionfish invasion by reporting sightings through REEF or the Florida Fish and Wildlife Conservation Commission. FWC has a Report Florida Lionfish app available for smartphones, and their Lionfish Challenge rewards those who harvest the species. REEF also has a free Lionfish Sightings App for iPhone, which allows people to track and record lionfish sightings all around the invaded region.

Teams of divers removed 545 invasive lionfish from the Gulf of Mexico during Mote Marine Laboratory’s Fifth Annual Sarasota Lionfish Derby from July 6-8. Although that number is less than last year’s record of 1,079, Lad Akins said he hopes to keep seeing those numbers drop. Akins is the director of special projects for Reef Environmental Education Foundation, which organized the event with Mote. He said the numbers hopefully reflect a decline in lionfish in surrounding waters.

Originally from the Pacific Ocean, lionfish are beautiful, yet deadly fish with voracious appetites that decimate local fish populations, including species key to maintaining healthy reefs. Lionfish have few natural predators and reproduce at a faster rate than native species.

It’s the reason why organizations like Mote and REEF encourage divers to collect and remove as many lionfish as possible. This year, seven teams, made up of two to four people, contended to catch the most lionfish, the largest lionfish, and the smallest lionfish to win cash prizes ranging from $150 to $1,000.

During the final weigh-in event on July 8, the public watched lionfish counted and measured by REEF staff and dissected by Mote scientists. Collecting data on local lionfish populations each year helps scientists study population dynamics, behavior and adaptations over time.

Team Local4Good, the one team new to the competition, didn’t make a single catch while hunting out in the Sarasota Bay, but leader Roger Landry said that was a good sign that few lionfish have invaded the area. Environmental sustainability is one of the reasons Landry chose to become a vegan a few years ago and participating in the derby was a way for him to hunt and eat lionfish awhile staying green.

“I saw it as a kind of a loophole,” Landry said. “I can’t feel bad about killing fish and I'm doing a good thing for the environment, so it was a win-win situation for me.”

The derby culminated with a tasting event on July 8 to promote the consumption of the destructive, yet delicious fish. Attendees voted for the tastiest dishes prepared by chefs from Michael’s on East, Indigenous, Mattison’s Forty-One, Tableseide Restaurant Group and Mote’s Deep Sea Diner.

Chef John Mancini of Deep Sea Diner said after the fishermen are done removing the lionfish’s venomous spines, it is just like preparing any other fish.

“It’s similar to most white fish,” Mancini said. “It's super delicate and just a tiny bit muddy tasting. It's not super mild, but not very strong or too oily.”

Mancini served a lionfish cake with chipotle aioli on a bed of spaghetti cucumber.

“The ultimate goal is to let people know that there is something more that they can do with this fish that is also destroying the habitat out there,” Mancini said. 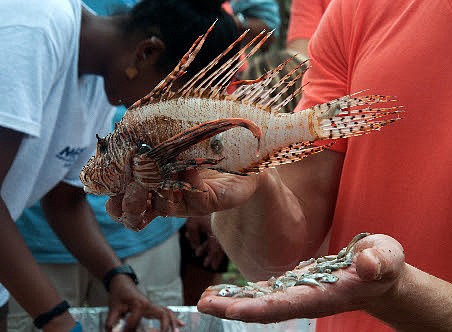 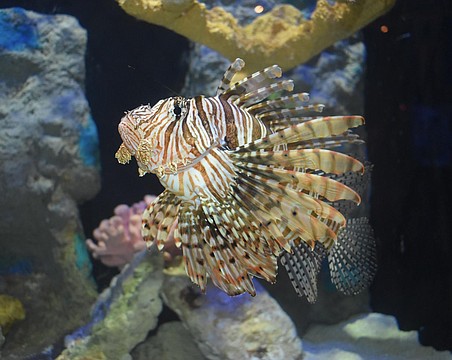 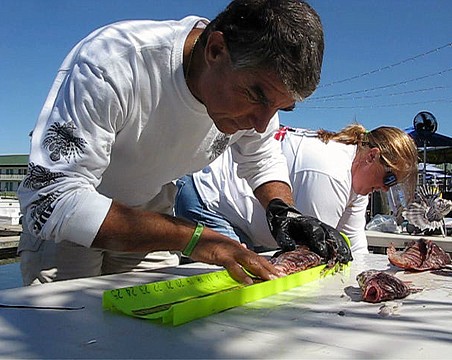 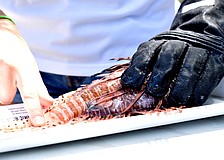 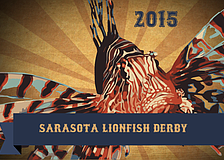 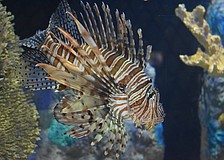 Lionfish derby's goal is to rid Sarasota water of the species 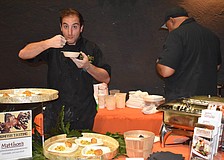 Weather shuts down lionfish derby but not the tasting 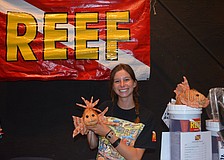