The movie, “The Man Who Invented Christmas,” credits Charles Dickens with the modern concept of Christmas.

George Frideric Handel deserves to share credit. Since 1742, Handel’s “Messiah” has been inseparable from the Christmas experience.

This Sunday, Dec. 10, Choral Artists of Sarasota will bring a contemporary take on that experience to the Van Wezel Performing Arts Hall.

This reprise performance of “Too Hot to Handel” is an ambitious collaboration. The concert’s 100 vocalists comprise 40 singers from Choral Artists of Sarasota; soloists from Westcoast Black Theatre Troupe; and singers from the State College of Florida Concert Choir, the Festival Singers of Florida and Manatee School for the Arts Chamber Choir. They’ll be backed by some of Sarasota’s finest professional orchestral musicians. Joseph Holt, the artistic director of Choral Artists of Sarasota, will conduct the concert. He offers a caveat to classical purists:

“Upfront, this is not your grandmother’s ‘Messiah,’” he says. “It’s a joyful jazz-gospel reinterpretation of the original arrangement.”

Would Handel be offended?

“I don’t think so,” says Holt. “Throughout music history, composers adapt, borrow and steal. Composers like Handel often repurpose their own music. ‘Unto Us a Child is Born,’ one of the great choruses from ‘Messiah,’ started as an opera duet.”

Holt adds that Handel recycled other snippets of his own music throughout this masterpiece. “That’s how he created ‘Messiah’ in only three weeks,” he says.

Holt notes that the saxophone hadn’t been invented in the 18th century — let alone the electric guitar and Hammond B3 organ. “The question is: ‘If Handel were alive today, would he use those instruments?’ I think the answer is ‘yes.’”

In Holt’s view, Handel was a musical genius, but also an opportunist. For Handel, financial necessity was the mother of musical invention.

“Handel was primarily an opera composer,” he explains. “In the time he composed ‘Messiah,’ the stages shut down for the Lenten season. Handel cleverly developed the oratorio so he could still make a living.”

Bottom line? Without Lent, we’d be missing a lot of great music.

“Too Hot to Handel” is a soulful, roof-raising arrangement of Handel’s “Messiah” — and a respectful one. “This arrangement takes it up a notch,” he says. “But the essence of Handel’s masterpiece is unchanged.”

This year, the concert venue will change to the Van Wezel. Holt notes that last year’s performance at the Sarasota Opera House was standing room only. “We had so many requests to do it again this year. This move was our logical choice,” he says.

Soprano Jenny Kim-Godfrey is the director of the choral program and music department chair at Manatee School for the Arts. She performed at last year’s concert. This year, she has her hands full preparing her highly talented students to take the stage.

“They’re totally psyched,” she says. “At one point during rehearsal I had to step out of the classroom. When I returned, they had this music blasting. They were dancing around the room and absolutely enjoying it. For them, doing ‘Messiah’ isn’t an obligation. It’s a labor of love.”

Westcoast Black Theatre Troupe’s participating vocalists are equally excited. Nate Jacobs, the theater company’s artistic director, is one of them.

“It’s a gospel concert — and my roots are in gospel,” Jacobs says. “As a singer, I started off with Dr. Henry Porter — and toured the nation singing gospel for 15 years. I’m thrilled to be getting back to my roots.”

He’s equally thrilled to have a single responsibility.

“During this show, I only wear one hat,” he laughs. “I’m not directing. All I have to do is sing. I rarely get the chance to do that. It’s all on Dr. Holt’s shoulders — and he’s doing an excellent job.”

Holt himself is as happy as a child on Christmas morning.

“Handel’s ‘Messiah’ is a long-standing holiday tradition,” he says. “This electrifying arrangement digs deep inside your soul. You can’t help but tap your toes and sway along to it. I think that’s why ‘Too Hot to Handel’ is rapidly becoming a new tradition in Sarasota. We’re all delighted to be a part of it.” 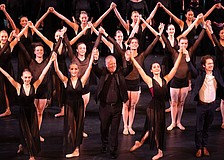