Red tide begins to disperse after causing a stink

On the north end of the island, fish kills and red tide smells remained prevalent over the weekend.

As Longboat Key holds its collective breath over the latest encounter with red tide, residents, business owners and town officials say they remain hopeful this won’t be a lengthy ordeal.

Josh Kelly, 41, of Sarasota, was paddling his covered kayak on a beautiful Saturday around noon in the inlet just off New Pass Bridge at the south end of Longboat Key. It’s his favorite hangout, he said, although red tide makes it less so.

“Last week, the whole inlet was covered in fish,” he said. “I’ve never really noticed it this bad in (Sarasota Bay.)”

Red tide is caused when the Karenia brevis algae grows in large blooms. It releases toxins that  kill fish and other marine life and can cause respiratory irritation in humans.

Kelly pointed to faint pinkish lines running all along the shorelines.

“That’s what’s left of the red tide after the tide goes out,” he said. “It lifts up the fish and takes them out, too.”

“It seems like it’s not as bad,” she said. “We’re basically in a wind tunnel here, so if there’s red tide we know it.”

Stanick, a 26-year Longboat Key resident, said she has a theory on how to help ward off red tide: Stop using so much fertilizer, which runs into the Gulf of Mexico and is known to encourage blooms.

“We’re a very affluent island that overfertilizes,” she said. “It’s got to go somewhere, so it goes in the ocean.”

“Recent rains in the area that wash accumulated pollutants, including bacteria from birds, pet feces, and wildlife into local waters, are also an important factor,” according to the report.

Red tide is not the only complication to island life right now.

Sandra Rios, spokeswoman for The Resort at Longboat Key Club, noted her patrons have had to deal with trucks hauling sand for beach renourishment as well as red tide. But with two pools, a spa, golf course and tennis courts, there’s plenty to enjoy, she said.

“The effect of red tide has been nominal,” she said. “We haven’t had any guests complain or had any cancellations.”

Closer to the Gulf, laborer Tim Ivey, 54, of Sarasota was working the beach renourishment job behind The Resort at Longboat Key Club. He said it has been smelly.

Ivey was mask-free Saturday and the air around the club seemed clear of funky fish smells.

On the north end of the Key, fish kills and red tide smells remained prevalent during the weekend.

Bartender Jeff DeBorde, of Mar-Vista Dockside Restaurant and Pub at 760 Broadway, said his crew raked the beach Saturday morning but the tide kept bringing in more dead grouper, pinfish, catfish and baitfish. The cleanup helped though, he said.

“We’ve only had one table leave,” he said in the early afternoon Saturday with several outside tables filled next to the dock.

From 2007 until late 2015, however, Longboat Key had no red tide costs. It did spend about $35,000 to deal with last year’s outbreak around Thanksgiving, he said.

Public Works employees worked during the weekend removing dead fish with a beach rake in areas where there was turtle clearance, Bullock said. South from Gulfside Road beach access is one of the heaviest areas for dead fish, he reported.

“It is not pleasant work, but the town crews are doing a great job, and I appreciate their dedication and hard work,” Bullock said.

The beach rake came to the town as a result of the Deepwater Horizon accident, Bullock reported.

“It does a good job on the beach and is a much-improved method from the hand work done in previous years,” Bullock said.

The dead fish are hauled to the Manatee County landfill.

The Florida Fish and Wildlife Conservation Commission says red tide is a naturally occurring microscopic alga documented almost every year since the 1840s somewhere along Florida’s Gulf Coast. Red tide begins 10 to 40 miles offshore and is transported inshore by winds and currents.

Bob Nunnally, 70, a Longbeach Village resident, had the freshly restored beach on the north end of the island virtually to himself Saturday. Only one car was parked outside the 100 North Shore access, which is usually lined with vehicles. Several fish carcasses and one dead eel littered the new beach and the whiff of red tide was in the air, but it didn’t deter Nunnally.

“I think the beach is great,” Nunnally said. “I hope it lasts more than six months.” 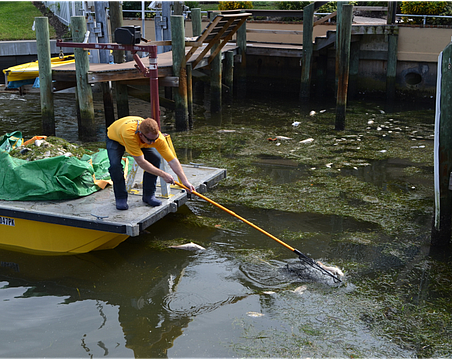 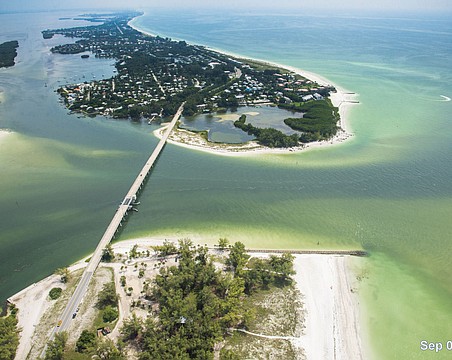 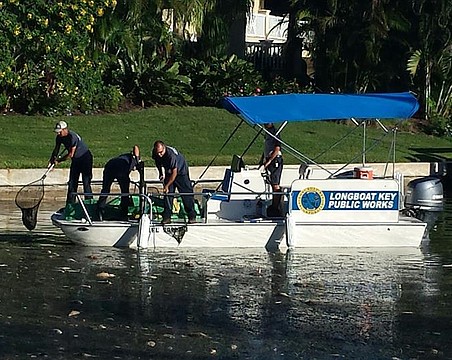 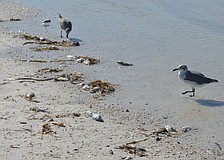 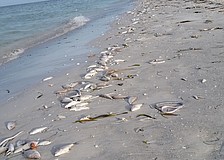 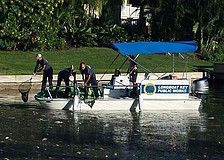 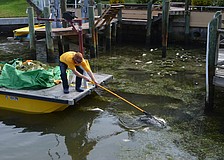 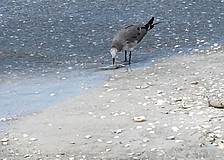