Joe Wallace, sitting with his wife, Joyce, on a couch in their Meadows' neighborhood home, was on a roll.

He was telling stories about how he met Joyce, more than 75 years ago.

"I lived in Pulaski, Illinois but they built a new high school in Mounds, so I had to go over there," Joe said. "That first day I went to the high school, I walked in the front door and walked down the hall with my friend, Jerry Parrott. I saw these girls standing down the hall and one of them was this blonde, Joyce. She was somebody I wanted to get next to."

As Joe continued, Joyce remained silent but constantly rolled her eyes, hoping her husband would share a few less facts about the past.

Impeccably dressed and with her hair looking beauty-shop perfect, Joyce was OK with Joe taking the lead role, which was more often than not the case for housewives in the 1940s and 1950s. However, her silence came with one caveat. She would find a way to let her husband know he was sharing a bit too much information.

She repeatedly jabbed him in the leg when she wanted him to reel back his enthusiasm.

Joe, wearing a white, dress shirt and dark slacks, stopped talking for a moment, and looked over at her. "Would you stop poking me?" he said.

He then returned to his story.

On Jan. 12, Joe and Joyce, both 88, quietly celebrated 70 years of marriage at Michael's On East in Sarasota. They proclaimed to be pretty much the same people they were when they met their freshmen years of high school.

Through it all, they have maintained their union, About half of married couples in today's America get divorced. They stayed the course.

Was Joe just the right guy for her?

"I still don't know," Joyce said with a laugh. "It was end of the war and there wasn't a lot of jobs. Joe was there, so I thought, 'Why not marry him?'"

Joyce said Joe didn't have a sense of humor when he was a teenager and he was a little guy who had a thick head of red hair. Joe said his future bride was a good athlete in track and she played the piano and the violin.

"I didn't play the violin," Joyce said, rolling her eyes, but without the jab.

Through the key anniversary years with Joe and Joyce Wallace

1946 -- Joe and Joyce are married. In that year, Japanese Lt. General Masaharu Homma is executed outside Manila in the Philippines for leading the Bataan Death March. Bikinis go on sale for the first time in Paris. "It's a Wonderful Life" is released. Harry Truman is president.

1956 -- Their 10th anniversary year. Elvis Presley hit the music charts for the first time in the United States with "Heartbreak Hotel.) Don Larsen of the New York Yankees throws the only perfect game in World Series history against the Brooklyn Dodgers in Game 5. Dwight Eisenhower is president.

1966 -- Their 20th anniversary year. The TV series "Mister Ed" airs its final episode. The U.S. announces it will substantially increase the number of its troops in Vietnam. "It's A Small World" opens at Disneyland. The Beatles end their U.S. Tour at Candlestick Park in San Francisco. Lyndon Johnson is president.

1996 -- Their 50th anniversary year. The Centennial Olympic Park bombing at the 1996 Summer Olympics in Atlanta kills one person and injures 111. Motorola introduces the "Motorola StarTAC Wearable Cellular Telephone, the world's smallest and lightest mobile phone to date. The first Pokémon game is released in Japan. Bill Clinton is president.

2016 -- Their 70th anniversary. Events TBA. Barack Obama is president and a new president will be elected.

When Joe married Joyce at the age of 18, he was enlisted in the Navy at a time when the allies had turned back the dual threats of Germany and Japan. By 1947, when he was discharged from the Navy, he needed an occupation.

He became the manager of a farm co-op and eventually put together a business deal with nine other partners in 1963 to build the first covered mall in Indiana. His business dealings made things comfortable for the couple and their three children, Leah (now 65), Paul (62) and Keith (59).

However, Joe's dedication to work left Joyce alone much of the time to deal with the household, and Joe admits today that he didn't appreciate all that she did.

"Over the years, it really changes your attitude what she is worth," said Joe, who moved with his wife to the area in 1978. "And now, she is the same, old gal. I know what to expect all the time. I know she is going to do what is right."

Looking back over 70 years of marriage, Joyce said it's hard to comprehend. "I can't imagine where the time went," she said.

Does she offer any advice on marriage?

"You have to be friends as well as mates," she said. "You need to have a lot of patience and you've got to have a sense of humor. "

Seventy years of marriage, and they never even had a honeymoon since Joe was in the Navy in 1946. They both are physically fit, so is a honeymoon coming in the near future?

Now who should get jabbed? 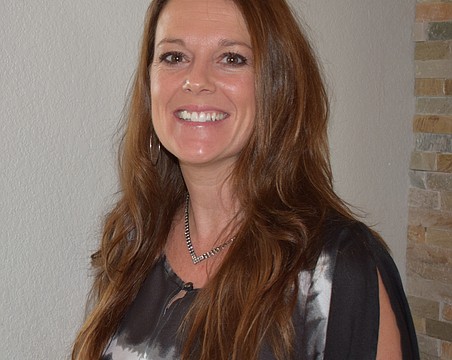 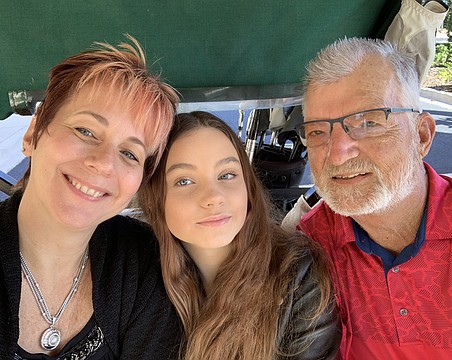 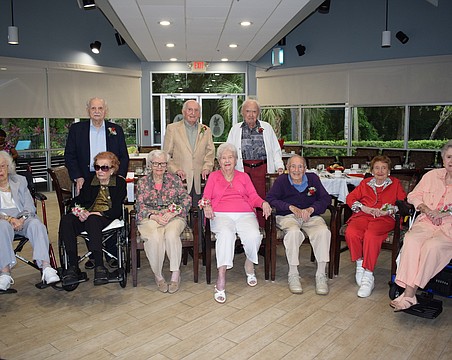 Ten centuries of wisdom at Aviva in Sarasota 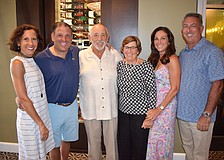 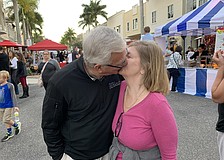 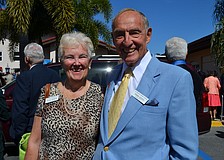 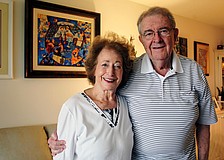 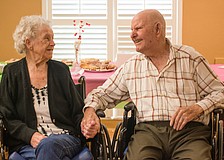 Couple looks back on 75 years of marriage