The man who donated the statue to the city is pushing officials to make improvements to the area surrounding the landmark.

Jack Curran is well aware that a loud faction of Sarasota residents isn’t too fond of Unconditional Surrender, the statue that towers over the bayfront and U.S. 41 near downtown.

Having acknowledged that, Curran wants to call attention to what he believes is a more representative sample of visitors and residents in Sarasota. Curran, the man who purchased the statue and loaned it to the city in 2009, is emphatic on one point: Unconditional Surrender has provided a significant benefit to the city.

“It’s not just me,” Curran said. “There are a lot of people who think a lot of that statue.”

That’s why, in Curran’s eyes, the city should be willing to make some upgrades to the area surrounding the attraction. Along with the trustees of his estate, Paul Kirkham and John Stafford, Curran is pushing the city to invest in infrastructure improvements near Unconditional Surrender. In May, the group reached out to city commissioners to lobby for such an effort.

“Everybody we talk to tells us how much they like it, how much they admire it,” Kirkham said. “I can’t tell you anything on that waterfront that gains more attention than that statue does.”

In addition to amenities such as additional landscaping and new signage by Marina Jack directing people to the statue, the group is largely focused on addressing maintenance and drainage issues. The existing walkway to the statue is too narrow, they say, and sidewalks to the east of the attraction are prone to flooding.

“If you’re down there in the rainy season, it gets a lot of traffic with people going up to get pictures,” Kirkham said. “There’s not enough of the paved area around there — that’s the first priority.”

Curran, who worked for the National Park Service for more than three decades, said the upgrades could benefit the city, as well. By including additional brick pavers as part of a long-term maintenance plan, the area around the state would require less frequent attention from staff.

This isn’t a new endeavor for Curran, a 93-year-old World War II veteran. Two years ago, he met with City Manager Tom Barwin and staff to advocate for the improvements. Curran left that meeting with the impression that the city was on board with the proposal, but saw no action.

“We’ve had two appointments with the runners of the city and haven’t gotten anywhere,” Curran said. “That’s tough on us.”

Barwin agreed the ideas sounded good, but cited funding as a major concern.

“My recollection is that we all agreed some additional improvements to the areas would be nice, but funding to repave parking and add additional sitting features as Mr. Curran envisioned were the challenges,” Barwin said in an email to commissioners.

Since then, Curran said he’s been stonewalled. If he were willing to fund the improvements himself, the city said he would have to hire his own landscape architect and submit plans for the project — with no assurance that the upgrades would be installed once he did. In 2013, despite the funding shortfalls, he got assurance from staff that signage should be up in the summer. As of now, nothing has been erected to direct visitors to the statue.

Throughout this process, Curran has developed the sense that the city resents the presence of Unconditional Surrender and is unwilling to invest in it before the 10-year loan period runs out. When the donation was made, it was approved by only a 3-2 vote. He points to the city’s Public Art Committee, whose members have been a vocal critic of the statue, as an influence on policymakers.

Taken together, he’s pessimistic about the statue’s odds of remaining in its current bayfront location when the loan period expires and the city assumes possession of the artwork.

“They can’t wait to move it,” Curran said. “Unless there’s a public outcry — if we get it before the public, they won’t move it. The public won’t allow it.”

City spokeswoman Jan Thornburg said the city has no plans to move the statue, and neither staff nor the commission has broached the subject of funding the landscaping improvements.

After failing to get a direct response from the commission or city administration — which, upon receiving an email from Kirkham last month, was under the impression that Curran had died — Curran and his trustees are uncertain about what their next step will be.

Both Kirkham and Stafford said that Curran is fired up and won’t give up without a protracted fight. Curran, for his part, doesn’t think he’s being unreasonable in his requests.

“We don’t want anything extra,” Curran said. “We expect what the statue deserves in the location it’s at.”

“Everybody we talk to tells us how much they like it, how much they admire it. I can’t tell you anything on that waterfront that gains more attention than that statue does.”

Unconditional Surrender deal is near 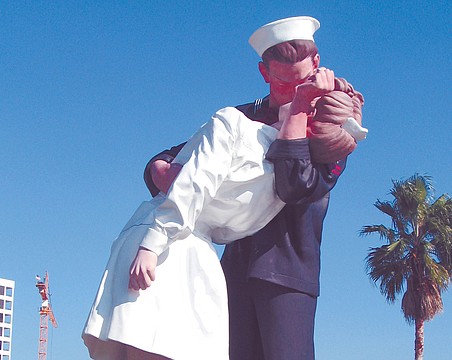 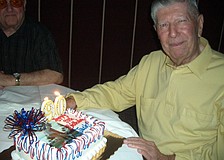 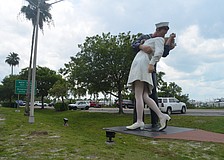 Despite Buchanan post, no decision on Unconditional Surrender location 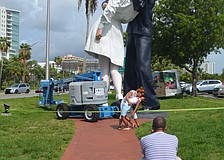 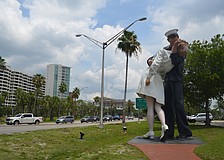