Gates believes sequestration will be disastrous for our national security, and if it gets passed, it would be the height of Congress’ irresponsibility.

“This is the direct path to hollowing out the military,” he says.

He thinks that because personnel cuts are exempted, money has to come out of accounts such as operations and maintenance, and modernization. The effect he thinks this will have is less money for military training and performing of missions.

“…It’s the dumbest of all possible cuts because it’s across the board,” he says. “No accounts are exempted except for personal, so there is no flexibility in terms of making decisions on priorities or anything else.”

It brought up the question if military bases would be closed. Gates explains that congress would have to approve the closing of a base. In his experience in attempting to close bases, Congress made it clear to him that “it was not going to happen.” Herein lays the problem, he says:

Downsizing and closing bases are one rational solution in his eyes, and as the budget decreases, he thinks it is necessary.

The hollowing out of military in the way that sequestration cuts would allow for, is what Gates fears will be the defense department’s future. Gates sees as “an irrational way of spending money because of politics and parochial interests on the part of members of congress that don’t allow the secretary and chiefs to (make) sensible decisions” on how money the defense department’s money is spent.”

What Gates hopes for the department’s future is no sequestration and no further cuts beyond the $480 million in the Budget Control Act from fall 2011.

Gates thinks there’s a better process going forward, similar to the cuts he made in 2009 —he describes how he made cuts: cut the funds, let the military leaders analyze what they need most, then gave them funds for the most necessary items.

“The goal should be how do we get more bang for our buck?” he says. 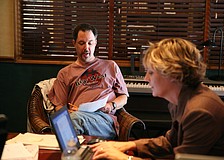