Unconditional Surrender is approaching its final hurdle to making the bayfront its semi-permanent home.

The World War II veteran who wished to purchase the controversial sculpture and donate it to the city signed purchase documents late last evening. The city attorney is reviewing those papers now to see if the terms satisfy the city’s requirements.

That money is tied up in certificates of deposit that mature at those different times.

Curran will receive the title to the sculpture after the first payment, and the Sculpture Foundation, which owns Unconditional Surrender, will be a co-owner of the CDs.

The condition of the donation to the city is that the statue must remain on the bayfront for at least 10 years, after which time the city becomes the its owner and can do with it what it pleases.

The agreement states, though, that if the city moves the sculpture off the bayfront before the 10-year period expires, he is entitled to a refund of up to $200,000.

Curran will be responsible for any maintenance before the city takes ownership.

Once the city ratifies the contract, the Sculpture Foundation will perform all necessary repairs and install a permanent base.

The Sculpture Foundation has agreed to indemnify and defend the city from any liability stemming from a copyright-infringement lawsuit.

Because Unconditional Surrender closely resembles the famous Times Square photo of a sailor kissing a nurse on V-J Day, some within the city and among the public feared the city may be open to a copyright suit if it accepted the donation.

Robin Roy can be contacted at [email protected]. 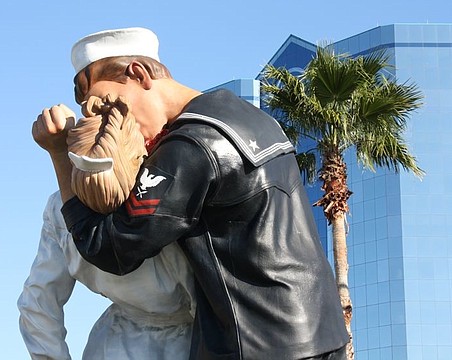 Unconditional Surrender gets another extension

Unconditional Surrender deal is near

Unconditional Surrender deal in the works