Some artists’ studios are easy to spot. There might be a bright green door with a purple knob, or a scrap-metal sign speckled with paint. Sometimes there’s a curious welcome mat or, at the very least, a faded wind chime.

Bill Buchman’s studio has none of this. Buried behind a chain-link fence a block east of the Hob Nob Drive-In, next door to an air-conditioner plant and an old beer-truck warehouse, Buchman’s 1,800-square-foot studio is so nondescript from the outside that even the machinists who share a driveway with Buchman aren’t quite sure which door belongs to the artist. In the four years Buchman, a faculty member at the Longboat Key Center for the Arts, a Division of Ringling College of Art and Design, has occupied the space, he’s not had one conversation with his industrial-park neighbors. He’s been busy.

Since 2007, Buchman has filmed two 90-minute, instructional-art DVDs and penned a 200-page, how-to, figure-drawing book, slated for publication later this year by Watson-Guptill, an imprint of Random House.

“For six months I didn’t do anything but eat, sleep and write,” Buchman wearily says, holding up a manuscript for “Expressive Figure Drawing,” a dense, spiral-bound instructional book filled with the artist’s unfettered illustrations of the female nude. “It was hell.”

In an art career that has spanned decades, writing a book, he says, has been his most arduous project to date.

“I could paint for days and weeks on end, but writing, for me, was something entirely different,” he says. “It took a tremendous amount of discipline and time. When I meet other people now who’ve written books, there’s a look of recognition that comes across their faces. They can see that you’ve walked across the coals.”

Not that his creativity is any worse for the wear. On the contrary, Buchman says, it’s renewed. For years he’s dreamed of writing an art book, a goal that seemed far-fetched until his two DVDs attracted the attention of an editor at Watson-Guptill.

Next year he hopes to publish another book, this time on abstract painting.

After spending 20 years in Europe — namely Copenhagen, where he met his wife, had a son and enjoyed commercial success as an artist — Buchman has settled comfortably in Sarasota, a city he describes as “eclectic, chaotic, laissez-faire and friendly.”

A native of Albany, N.Y., Buchman studied painting and drawing at the Albany Institute of Art and the Museum of Modern Art’s Institute of Modern Art, in East Hampton, N.Y. A jazz fanatic and accomplished pianist, he holds both bachelor’s and master’s degrees in music from the New England Conservatory of Music.

In 2001, he relocated his family to Sarasota to join the faculty at the Longboat Key Center for the Arts. Shortly thereafter, he formed the Bill Buchman Trio, a three-piece jazz ensemble that recorded an album in 2003 and garnered a local following from its weekend gigs at the Ritz-Carlton, Sarasota.

“I still play the occasional party,” Buchman says, “but for the most part I’ve kept a low profile.”

With deadlines behind him, Buchman, now in his ninth year at the Longboat Key Center for the Arts, can finally focus his attention on other projects. Perched on a stool inside his enormous studio, dressed in head-to-toe black — from his trademark Buddy Holly frames to his unfussy flip-flops — Buchman nurses a juice box and explains that he’s in the middle of designing a line of paintbrushes for Jerry’s Artarama, an art-supply company based in Raleigh, N.C.

“I’ve been walking around with all these ideas,” he says. “I could never figure out what to do with them, until now.”

Despite his studio’s austere façade, its interior is flush with color and sound. Jazz music drifts from the speakers of a dusty radio. Walls and drafting tables are littered with drawings of the female body — some jagged and squiggly, some round and supple, some abstract, some cubist, some headless, some not, some dabbed with watercolors and some shaded with charcoal.

Buchman’s DVDs have catapulted him into national art circles and led to workshop-and-lecture opportunities.

“It’s all really connected for me,” Buchman says. “Whether it’s writing, filmmaking, drawing or music. Although they’re all different expressions, I’m still trying to express the same thing, an idea of beauty, harmony and … ”

He closes his eyes, straining to find the right words. Giving up, he gestures toward a sign hanging by the door that reads: “To understand and express harmony and beauty is the transcendent function of art — Bill Buchman, 2006.”

“That little quote says it all,” Buchman muses. “The most important part of the process is having a goal. I’m always trying to achieve some expressive goal with spontaneity and joy. It’s how I approach most things.”


CREATIVE PRECONCEPTIONS
Bill Buchman debunks three common art myths.
1. All artists are tortured.
“The popular notion that good art should not be therapeutic is total nonsense. Art is therapeutic whether you know it or not.”

2. The human body must be proportionate.
“Proportions and realism stand in the way of creativity and progress. The idea that if you draw the right proportions everything will be OK is, for the most part, a distraction.”

INFORMATION
Bill Buchman teaches expressive figure drawing from 9 a.m. to noon every Monday now through April 26, at the Longboat Key Center for the Arts. For a detailed class schedule, visit www.lbkca.org or www.figuredrawing.org. 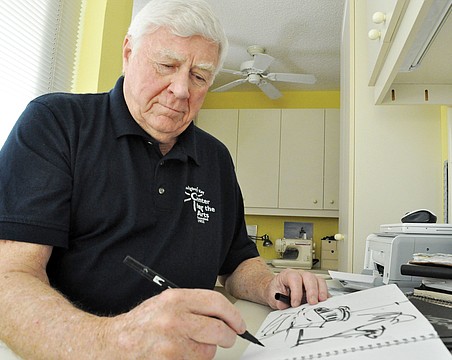 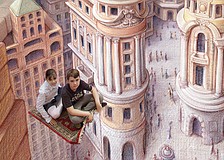 Chalk of the Town: Kurt Wenner 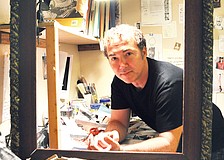