RIVER CLUB — A smile spread across Dehlia Garrity’s face as she flitted down the hallway of Braden River Elementary School.

Besides walking her two sons down these hallways many years ago, the first-grade teacher has spent almost her entire teaching career here. Fellow teachers Charlotte Gillott, Sue Tschappat, Donna Hart and Stephanie Lloyd have been at Braden River since the day it opened more than 20 years ago.

And on May 21, they and other educators gathered in the school’s media center for an informal 20th anniversary celebration.

“It was so exciting,” said Gillott of the school’s opening. “I had to drive out here to see the construction from the day I knew I was going to be here. I still have pictures of it in my album.”

The school opened in August 1988 under the direction of Principal Dote Shields, who handpicked Braden River’s first staff.

“I didn’t realize how lucky I was to be here until I found out there was a 12-page list of teachers who wanted to be there,” Gillott said.

But the camaraderie experienced among new staff members was instantaneous. Teachers pulled together, eagerly picking out equipment and supplies in preparation for the arrival of students who were redistricted from Oneco, Bashaw and Daughtrey elementary schools.

“It was the most special time to be able to open a new school,” Tschappat said. “Mr. Shields just had this ability to pull us together and make us feel like a family.

“We were getting kids from several different schools and that’s difficult sometimes,” she said. “The children felt part of that family atmosphere, too.”

The feeling of being the Braden River Wranglers family has stayed strong throughout the years, regardless of who has been at the school’s helm. Teachers said they lend each other their support, sharing lesson plans for classes or helping one another when a need arises. They also have walked together through more personal issues such as births and weddings and divorces and deaths.

“We’ve all got each other’s backs,” Lloyd said.

Over the years as the East County has grown, Braden River’s student population has reflected that growth — first ballooning to overcrowded status and then finding relief when neighboring schools such as McNeal opened. At its peak, the school had more than 1,200 students.

As current and former educators flipped through scrapbooks of photos at the anniversary celebration, they made sure to point out each other’s children or old friends while swapping stories of the last 20 years at the school.

“It’s hard to believe (it’s been so long),” said substitute teacher Leah McElroy, who was the school’s first guidance counselor. “It went so fast.” 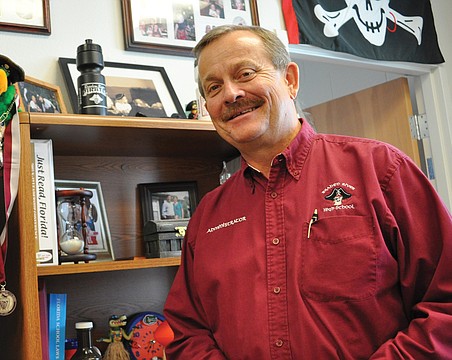 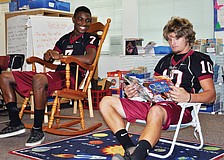