LAKEWOOD RANCH — Schroeder-Manatee Ranch President and CEO Rex Jensen isn’t sure whether to breathe a sigh of relief or cluck his tongue in despair, but for what it’s worth, his company now officially owns the hockey arena site off Center Ice Parkway.

Although SMR foreclosed on the site April 21, ownership of the property was not fully realized until May 6, when a three-judge panel at the Court of Appeals in Lakeland dismissed a request by contractor Walbridge Aldinger to overturn a court ruling last year and put its lien on the property in first position over SMR’s.

“It’s kind of like the dog that caught the car,” Jensen said of taking ownership of the arena site. “What do you do with that? We’ve been chasing this car, and we now have it by the tire or the bumper or something, and we need to figure out, where do we go from here?”

In the current market, moving forward will hold no easy answers, Jensen said.

How a multi-use facility like the arena should be structured is still up for debate, as is its location, Jensen said. And because the structure does not meet current building codes, among other reasons, the company likely will demolish and rebuild it rather than adding to the existing structure.

Jensen also said SMR will not hire Walbridge Aldinger to complete work on the project.

Until recently, SMR has declined discussing the arena with interested businesses and prospective hockey teams because it was not the site’s owner. SMR officials also have avoided speculating how they would use the property when they regained ownership.

But now, with title in hand, company officials can reignite those conversations and develop a strategy.
“Now we’re going to go back and say, ‘If you are still interested, what do you think?’ Jensen said. “It’s not much more scientific than that. We literally are right at square one with the thing.”

Jensen said talking with professionals who have worked on similar projects will help determine what business model to use and how to develop a plan of action.

“We’re not just going to assume (the previous owner’s) plans are the way to go because something was obviously wrong with it,” Jensen said. “I want to look under every rock and figure out the whole thing from scratch.”

Several hockey teams have approached SMR over the last few years about using the arena, but Jensen said there is no guarantee that hockey will come to Lakewood Ranch.

“(Hockey) is in the mix, but we’re literally going to question everything,” Jensen said. “I do feel there continues to be a market expression for it.”

Jensen also said it seems like a multi-purpose arena could fill a need for a strong entertainment presence in Lakewood Ranch, but each of SMR’s decisions must be based on knowledge rather than intuition.

To that end, SMR must find a suitable company or companies with whom it can do business.
“That will take some time,” he said. “(We want) something that works for the community.”

Jensen: Ranch could lead way out of housing crisis 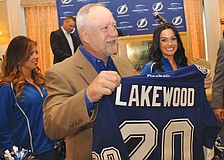