Two weeks after the keys’ season high of 17 recorded-realty sales, the keys’ market dropped back to 11 transactions the second week of June and seven the third week.

Despite this, the leading sale for the week of June 15 through June 19 was the $2,175,000 that Sandra Wuliger, of Moreland Hills, Ohio, paid for Unit 602 in the 88-unit Beach Residences on Lido Beach.

The sellers were fellow Ohioans, Lorinn and Mark Williams, of Cincinnati. The Williamses bought the three bedroom, three-bath condominium with 3,964 square feet of living area new for $2.5 million in December 2005, at the end of the recent real-estate boom.

The Shore
The week’s largest sale on Longboat Key was on the Manatee County side of the Key, where Unit 113 at the 54-unit The Shore, 5757 Gulf of Mexico Drive, was purchased for $502,000 by Charles and Susan DiNatale, of Orchard Park, N.Y.

Karen Sawyer, of Hartland, Wis., sold the condominium as general trustee for her trust. The three-bedroom, two-bath condominium with 1,561 square feet of living area was constructed on the Key’s Gulf beach in 1975.

The two-bedroom, two-bath condo at 2020 Harbourside Drive has 1,192 square feet of air-conditioned living area. Arvida Corp built the condo in 1984.

C.T.B. Rentals paid $100,000 for the condo in December 2006. It was constructed in 1991. Signing the deed of sale for C.T.B. were the firm’s managing members, Thomas and Carrie Buchwald, of Lincolnshire, Ill.

Bay Harbour Apartments
Kelly and Larry McCarty, of Auburndale, purchased Apartment 103 in Building B at the 39-unit Bay Harbour Apartments, 450 Gulf of Mexico Drive, for $250,000 from Margaret Overdorf and William Parkhurst, both individually and as successor co-trustees of the Claire Henkle revocable trust. Overdorf resides in Palm City, and Parkhurst in Williston.

The apartment has two bedrooms, two baths and 1,194 square feet of air-conditioned living area. It was constructed in 1970.

Key sales holding up
Sales on the keys during May averaged nine per week, totaling 45. The first three weeks of June has more than maintained that pace with 35 total sales for a near average of 12 sales per week so far. 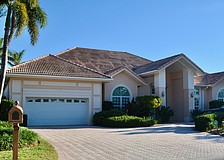