The imminent closure of Sarasota News and Books is leading downtown merchants to hold a rally this weekend at the Downtown Farmers Market, designed to support local shops and restaurants.

“Everybody is so riled up over Sarasota News and Books,” said Wendy Getchell, president of the Downtown Sarasota Merchants Association and owner of Lotus.

Scheduled to attend the rally, which begins at 10:30 a.m. Saturday, Aug. 22, is Rep. Vern Buchanan, R-Longboat Key. Getchell and Sarasota News and Books co-owner Andrew Foley will also speak
to try to persuade residents to shop and dine in local stores and restaurants.

Getchell said there was an outpouring of support this past week for Sarasota News and Books, when word began circulating that it may close.

Foley confirmed Tuesday that the bookstore’s last day of business will be Aug. 31.

For the past two weeks, he had been trying to negotiate lower lease terms to help him cope with the faltering economy. He is currently paying more than $12,000 a month for his 4,740-square-feet retail
space on Main Street.

The landlord, Randall Bono, was willing to reduce that to $9,875 per month, which equates to $25 per square foot, but Foley said that was not low enough to allow him to stay in business.

“I don’t think he’s trying to gouge us,” Foley said. “He just wasn’t willing to go as low as we needed.”
Bono did not return messages seeking comment. He has also stopped returning Foley’s calls.

“He may already be close to signing another tenant,” Foley said. “We are devastated. Two weeks ago, we didn’t think it was going to come to this.”

In the face of flagging book sales, Foley had been altering his business plan. With the blessing of his landlord, Foley had architectural drawings made that increased the size of his café and shrunk the area with books, magazines and greeting cards.

He also had been working with the city for nearly a year on a plan to create more outdoor table space along Palm Avenue. But, unless his landlord changes his mind, all those plans will end.

But, the closing of Foley’s current Main Street location may not be end of Sarasota News and Books.

Foley said several property owners have approached him about relocating his bookstore to their available space.

“We are keeping all our options open,” he said.

In the meantime, Foley wants all the people who have offered him help to keep his store open to put that energy into supporting other downtown shops. Saturday’s rally is a step in that direction.

Said Foley: “We hope this concern for the local economy goes to good use.” 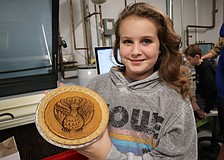