The 60-second commercial "Believe in Hope" shows the difference made by guide dogs in the lives of veterans and people with disabilities.

After the premiere of the 60-second animated short "Believe in Hope" played at Lakewood Ranch Cinemas on Wednesday, Amber Watt stood alongside her husband, Morgan Watt, as she always has done.

The animated short is an important project by Southeastern Guide Dogs to raise awareness of its mission to supply extraordinary dogs to people with vision loss, veterans with disabilities and children who have significant challenges.

According to Riverview's Morgan Watt, his service dog, Foley, restored his will to live with that unconditional love.

Amber Watt was married to Morgan through his pre- and post-service life, so she was asked why a dog, who came to the household in 2014, could make such a difference when a wife could not.

"That's an interesting question," Amber Watt said. "Human relationships have complications. A relationship between a man and his dog is uncomplicated."

The bottom line is that Foley did more than just save Morgan Watt from a tragic fate. He strengthened an entire family.

"Morgan has a support network — friends, family, doctors, kids — but the dynamic a dog brings is beyond human," Amber Watt said. "I feel that Foley brought back a part of Morgan that I thought we had lost forever. And Foley's impact had a ripple effect. It affected Morgan, and me, and the family, and the community as well."

Morgan Watt volunteers with Southeastern Guide Dogs and he shares his story with the community.

"A dog doesn't eliminate PTSD," Amber Watt said. "But Morgan's bad days are not as bad."

The theater was about three-quarters full of donors and potential donors to Southeastern Guide Dogs. Besides watching the 60-second animated short, the crowd also was treated to a video about the making of "Believe in Hope." It was called "Building Hope."

In attendance was veteran Dave Caras, who lost his right leg after his deployment to Iraq, when while running on the sidewalk  a car ran off the road and hit him. Seminole's Caras was used as the inspiration for the look of the veteran in "Believe in Hope."

After watching "Believe in Hope," Caras said the veteran did look like him when he was younger.

"But I'm not that depressed now," Caras said.

Caras was accompanied by his Southeastern Guide Dog graduate, Bobb, who has been with him seven years.

"Believe in Hope" features Jack, a United States Marine Corps veteran who has had his left leg amputated. Just before Christmas, he attempts to hang a tree-topper, but slips and almost falls. He drops the tree-topper in a box and sits down, dejected.

A Southeastern Guide Dog trainer then enters with a service dog, Hope. The dog scoops up the tree-topper in his mouth, he gets Jack to hang it. The two hug with Jack smiling.

The message, of course, is that there is hope.

Southeastern Guide Dogs at the event noted that nearly 500 veterans died by suicide in 2021 in Florida alone.

The animated short cost approximately $150,000 to make, paid for by the Patten Family Foundation. The ideas were hashed out at Southeastern Guide Dogs site in Palmetto, then the animation was done by Studio Kimchi in Barcelona, Spain, and the sound completed the project at Timbukto Studios in Lisbon, Portugal.

The short has been released to 2,000 media outlets across the country to be used as a public service announcement.

"It's all about awareness and new donors," said Katie McCoy, a Southeastern Guide Dogs associate director of philanthropy who lives in the Meadows with her guide dog, Bristol. "It also to each (sight-impaired) people and veterans who can find out where to go to get the help they need."

Lakewood Ranch's Michele Ferguson is a puppy raiser for Southeastern Guide Dogs who attended the event.

"These dogs absolutely give freedom and hope," she said.

Morgan Watt said he had lost hope in 2013 when doctors at the Mayo Clinic told him there was nothing they could do for him.

"I was out of options," he said. "As I digested the news, I entered into the darkest years of my life. Now every morning I wake up, Foley wags his tail like he is the happiest dog in the world. He is just happy to see me awake. That's the way it has been the last seven years. It's an unconditional love that only a dog like this can deliver." 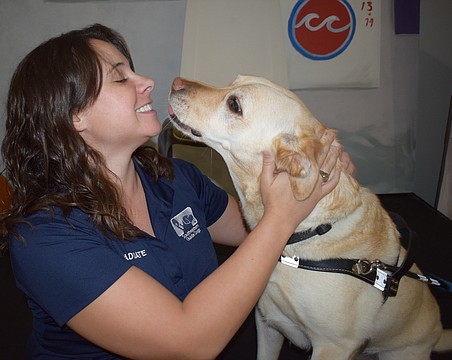 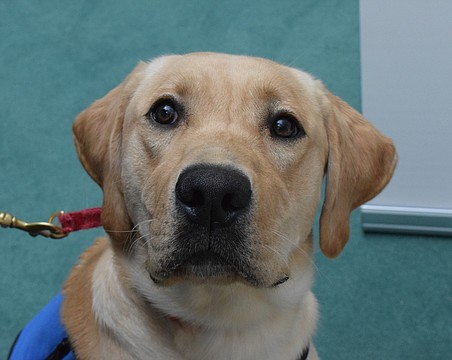 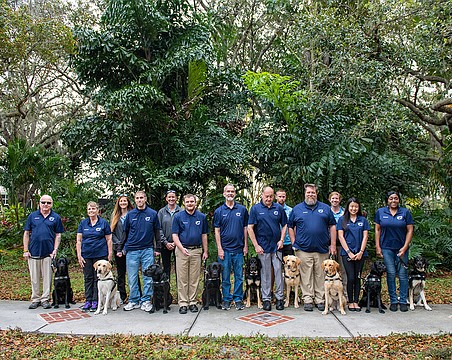 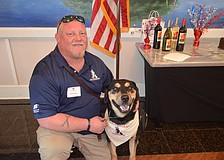 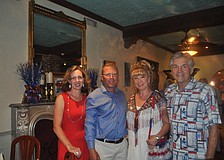 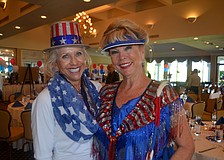 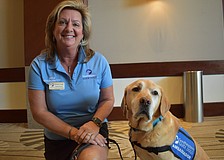 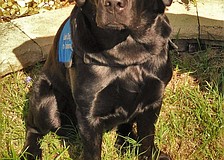